Password recovery. Security (to sort) Conferences. How Private Browsing Settings Actually Work. Let's be honest: There's probably a few things you've been looking at online that you don't want anyone to know about. 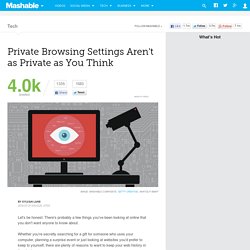 Whether you're secretly searching for a gift for someone who uses your computer, planning a surprise event or just looking at websites you'd prefer to keep to yourself, there are plenty of reasons to want to keep your web history in the shadows. There a few different ways of doing this, and they all depend on who it is you want to hide your history from. The resistance (privacy-to sort)

Tor. Protection against cyberspace attacks. i2p. Proxy. Privacy (to sort) -> Real trees. Related trees. Privacy law. Ashk4n : Of the 4 US webmail providers ... CEOs and CISOs must share blame for data breaches. June 04, 2014 Data breaches continue to make the news, with eBay and Target the most prominent of recent victims, but questions are now being asked on which personnel should take the blame. 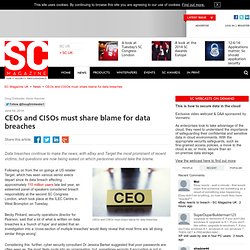 CEOs and CISOs must share blame for data breaches Following on from the on goings at US retailer Target, which has seen various senior execs depart since its data breach affecting approximately 110 million users late last year, an esteemed panel of speakers considered breach responsibility at the second SC Congress London, which took place at the ILEC Centre in West Brompton on Tuesday. DuckDuckGo: illusion of privacy? > No, actually, it's not the point, No, actually, that was my point, and while you can disagree with my point, you can't tell me what my point is. 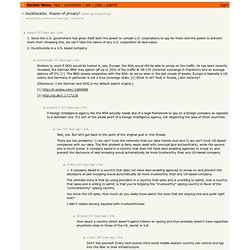 Listen, I'll make it easy for you. > Either his criticisms of duckduckgo have merit or they don't. Germany Opens Criminal Investigation On Alleged NSA Merkel Phone Tap. Documents provided by NSA leaker Edward Snowden indicated in October that the U.S. was monitoring Merkel's cellphone conversations, as well as those of 35 other foreign leaders. 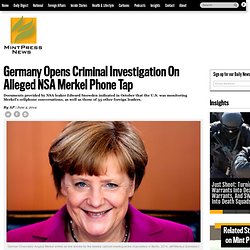 German Chancellor Angela Merkel smiles as she arrives for the weekly cabinet meeting at the chancellery in Berlin, 2014. (AP/Markus Schreiber) BERLIN — German prosecutors have opened an investigation into the alleged monitoring of Chancellor Angela Merkel’s cellphone by the U.S. National Security Agency, officials said Wednesday, in a move that could again complicate diplomatic relations between the two allies.

It was not immediately clear what the new investigation might mean in terms of possible prosecutions of Americans. Documents provided by National Security Agency leaker Edward Snowden indicated in October that the U.S. was monitoring Merkel’s cellphone conversations, as well as those of 35 other foreign leaders. The government didn’t exert any influence on the prosecutor, Seibert told reporters. Tor Challenge. Relays and bridges qualify for the Tor Challenge if they are created on or after June 4th, 2014. 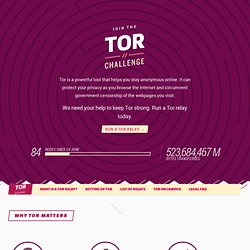 We will also give credit to relays that increase their RelayBandwidthRate and RelayBandwidthBurst by at least 128 KB/s (compared to the average bandwidth prior to June 4th, 2014). Before submitting your Tor relay, make sure you can find it on Globe by searching for the nickname you configured. You may need to wait up to one hour for the directories to publish the new server information. We encourage people to keep their Tor relays running for a long time. That's why we'll be giving you a limited-edition sticker if your Tor relay is still running 12 months after we launch this campaign.

Myfreeweb/scsc. The Pirate Bay founders are building a P2P internet. January 6th, 2014 at 12:24 pm - AuthorJon Martindale The Pirate Bay has been shaking up the internet for over a decade at this point, first by helping popularise torrents, then by its founders continually fighting charges that they’re responsible for what their user base does and most recently for releasing the Pirate Browser, which helped people circumvent the simple DNS and IP blocks put into place by search engines and ISPs around the world at the behest of misinformed and biased governments. 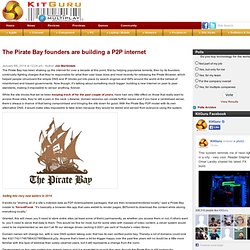 Now though, it’s talking about something much bigger: building a new internet on peer to peer standards, making it impossible to censor anything, forever. While the site blocks that we’ve been keeping track of for the past couple of years, have had very little effect on those that really want to access those sites, they’re still a pain in the neck. Sailing into very new waters in 2014. Your Online Pictures Will Be Used To Identify You On CCTV. Despite the growing criticism worldwide for the privacy violations of the NSA, the National Security Agency continues to harvest millions of images of people from the web. 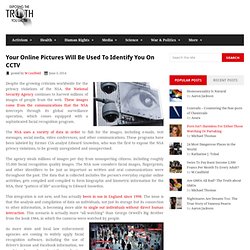 These images come from the communications that the NSA intercepts through its global surveillance operation, which comes equipped with a sophisticated facial recognition program. The NSA uses a variety of data in order to fish for the images, including e-mails, text messages, social media, video conferences, and other communications. These programs have been labeled by former CIA analyst Edward Snowden, who was the first to expose the NSA privacy violations, to be grossly unregulated and unsupervised.