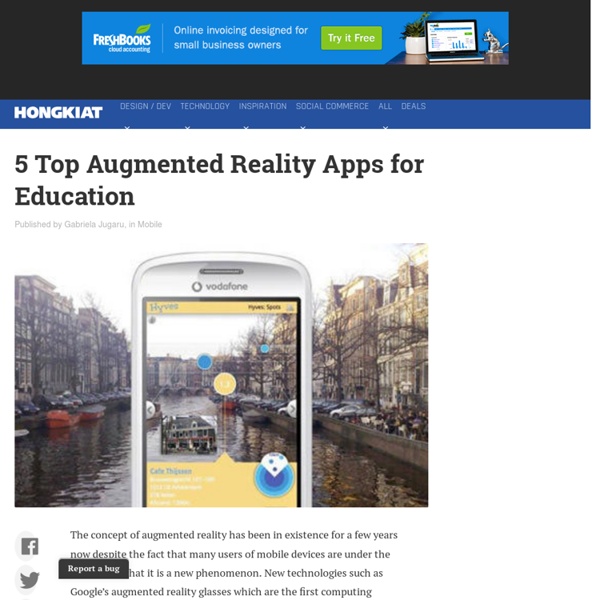 Appealing Apps for Educators: The Back to School Edition - iPhone app article - Lucy Gray According to Apple, in January of this year, at least 1.5 million iPads were adopted by educational institutions and an astounding 20,000+ education-related apps were found in the App Store. Those numbers continue to explode, and more recently, the company announced that 1 million more iPads were purchased by the education market in the third quarter alone in 2012. So, given this plethora of devices infiltrating schools, where do busy educators find the best apps and effective strategies for using iOS devices in the classroom?

The next big thing in tech: Augmented reality SANTA CLARA, Calif. -- Reality isn't what is used to be. With increasingly powerful technologies, the human universe is being reimagined way beyond Google Glass' photo-tapping and info cards floating in space above your eye. The future is fashionable eyewear, contact lenses or even bionic eyes with immersive 3D displays, conjuring up a digital layer to "augment" reality, enabling entire new classes of applications and user experiences. Like most technologies that eventually reach a mass market, augmented reality, or AR, has been gestating in university labs, as well as small companies focused on gaming and vertical applications, for nearly half a century. Emerging products like Google Glass and Oculus Rift's 3D virtual reality headset for immersive gaming are drawing attention to what could now be termed the "wearable revolution," but they barely scratch the surface of what's to come. But now augmented reality is about to break out into free space.

Augmented reality NASA X38 display showing video map overlays including runways and obstacles during flight test in 2000. Augmented reality (AR) is a live direct or indirect view of a physical, real-world environment whose elements are augmented (or supplemented) by computer-generated sensory input such as sound, video, graphics or GPS data. It is related to a more general concept called mediated reality, in which a view of reality is modified (possibly even diminished rather than augmented) by a computer. As a result, the technology functions by enhancing one’s current perception of reality.[1] By contrast, virtual reality replaces the real world with a simulated one.[2][3] Augmentation is conventionally in real-time and in semantic context with environmental elements, such as sports scores on TV during a match.

10 Must-Have Apps for Successful High School Students A high school student's plate isn't just filled with classes, but also sports, clubs, SATs and a social life of proms and pep rallies. Don't head into the classroom unarmed — turn to your phone or tablet. There are plenty of apps to help keep your hectic life organized. SEE ALSO: 5 Tools Every Student Needs to Know In high school, your courseload will tip the scales and the pressure of college apps and AP classes will challenge every moment.

How Augmented Reality Works Video games have been entertaining us for nearly 30 years, ever since Pong was introduced to arcades in the early 1970s. Computer graphics have become much more sophisticated since then, and game graphics are pushing the barriers of photorealism. Now, researchers and engineers are pulling graphics out of your television screen or computer display and integrating them into real-world environments. This new technology, called augmented reality, blurs the line between what's real and what's computer-generated by enhancing what we see, hear, feel and smell.

6 different ways of getting student feedback in your iPad lesson. Update 14-09-2012: Syncing Notability with Dropbox is possibly the easiest and best way of keeping track of your students’ work. One of the most difficult challenges for the teachers at my school is changing from workbooks and worksheets to get students to work and monitor their answers on the iPad. There are many ways to go about it. What is augmented reality (AR)? - Definition from WhatIs.com Augmented reality is the integration of digital information with the user's environment in real time. Unlike virtual reality, which creates a totally artificial environment, augmented reality uses the existing environment and overlays new information on top of it. Boeing researcher Thomas Caudell coined the term augmented reality in 1990, to describe how the head-mounted displays that electricians used when assembling complicated wiring harnesses worked.

What is Augmented Reality? Augmented reality is using technology to superimpose information on the world we see. For example, images and sounds are superimposed over what the user sees and hears. Picture the "Minority Report" or "Iron Man" style of interactivity. 7 Great Augmented Reality Apps for your Classroom The TechEducator Podcast is a weekly round table discussion about current topics in educational technology. For more information, please visit www.techeducatorpodcast.com. Many great ways to participate in the TechEducator Podcast. Are you enjoying Educational Podcasting Today or other shows on the TeacherCast Network, please share your thoughts with the world by commenting on iTunes today. I enjoy reading and sharing your comments on the podcast each week.