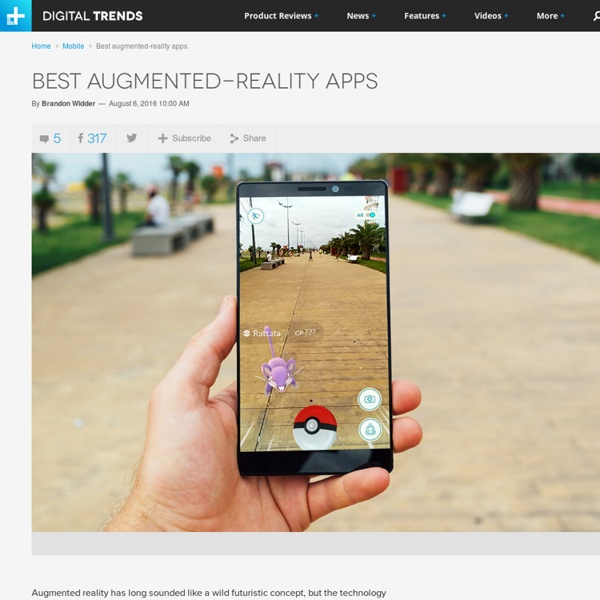 Augmented reality has long sounded like a wild futuristic concept, but the technology has actually been around for years. It becomes more robust and seamless with each passing decade, providing an astonishing means of superimposing computer-generated images atop a user’s view of reality, thus creating a composite view rooted in both real and virtual worlds. Although AR apps run the gamut, from interactive map overlays and virtual showrooms to massive multiplayer skirmishes, each piece of software hones in on smartphone GPS and camera functionality to create a more immersive experience. The available selection of augmented reality apps is diverse, encompassing both premium and freemium offerings from a variety of big and no-name developers, but sometimes choosing which apps are worth your smartphone or tablet’s precious memory is tougher than using the apps themselves. Here are our top picks for the best augmented reality apps available, whether you’re searching for iOS or Android apps. Related:  High Tech • Apps

Augmented reality in education: teaching tool or passing trend? | Higher Education Network What some may call an 'unsurprising' 71% of 16 to 24-years-olds own smartphones, so why aren't teachers utilising these in the classroom or campus? Is the use of these devices going to detract from the learning process or contribute to future workplace skills? Should teachers be using techniques such as augmented reality (AR) to engage students and develop their skills for the modern world? Well, I say 'yes'. I believe we should be embracing these opportunities. AR allows people to add digital content to printed material, geographic locations and objects. City University London have used a combination of techniques to develop resources through the CARE (Creating Augmented Reality in Education) project for healthcare students, including a series of 'health walks'. The past academic year has seen many institutions using AR technology within their prospectuses. So what are the advantages for learners? So why does there seem to be a sudden interest to tap into these technologies?

20 Cool Creativity Apps for Tech-Minded Teachers Tech-savvy teachers incorporate apps into their teaching practices with ease, and creativity apps are a favorite for students who want to do something special for a class project. Here’s a list of 20 different creativity apps for the tech-minded educator to utilize in a range of creative classroom learning adventures. We often speak about Creativity Fluency and its role in shaping holistic modern learners. The process of Creativity Fluency is defined by the 5Is: Identify, Inspire, Interpolate, Imagine, and Inspect. Enjoy this list of creativity apps for using with your students’ next big projects.

What is Augmented Reality | Layar It's not a futuristic dream, it’s here now. Augmented reality (AR) is cutting-edge technology that allows for a digitally enhanced view of the real world, connecting you with more meaningful content in your everyday life. With the camera and sensors in a smartphone or tablet, AR adds layers of digital information – videos, photos, sounds – directly on top of items in the world around us. Ready to see what Layar can do for your business? Why Layar Make augmented reality part of your everyday life From exploring a new city with helpful tips to discovering additional content within the pages of a magazine, the possibilities for AR are nearly endless. With AR, it is easy to have a great digital experience on top of interactive magazines, ads, packaging, business cards and other items. What the market says

20 Augmented Reality Experiments in Education Have you looked into augmented reality and what is being done with it to redefine education? I found this blog post from onlineuniversities.com very interesting. We are usually focused on how social learning (LMS) technology is making a difference in training and education programs in organizations of all sizes, anywhere in the world, but it is important to stay on top of creative trends growing in popularity. Check out the full article below: Augmented reality is exactly what the name implies — a medium through which the known world fuses with current technology to create a uniquely blended interactive experience. Second Life:Because it involves a Stephenson-esque reality where anything can happen, Second Life proved an incredibly valuable tool for educators hoping to reach a broad audience — or offering even more ways to learn for their own bands of students. See what TOPYX has to offer for yourself with a free, personal LMS demo. Social learning is a subset of augmented reality.

15 Good iPad Apps for Students Projects and Real World Learning February 11, 2017 Here is a collection of some very good iPad apps students can use in their classroom projects. The apps, which are curated from Apple's Real World Learning collection, are geared towards enhancing a number of key skills that include: creative thinking, design skills, literacy skills, coding, and many more. Some of the things students can accomplish using these applications include: create beautiful ebooks to share with others; create visual sketches to record notes; design educational video clips, screencasts and presentations; capture and organize ideas in diagrams and mind maps. 1- Book Creator ‘Book Creator is the simple way to make your own beautiful ebooks, right on your iPad. ‘Paper is the best way to capture and connect your notes, photos, and sketches. 3- iMovie ‘iMovie lets you enjoy your videos and tell stories like never before. 4- Adobe Spark Video ‘Spark Video helps anyone create compelling animated videos in minutes. 5- Haiku Deck 6- ScratchJr 8- Green Screen

Augmented Reality Apps: Making the Case for Smart Eyewear | Innovation Insights Image: Shopecia/Flickr The publicity around Google Glass has helped stir attention for the market potential of wearable technology. In what appears to be the future of smart eyewear, Google Glass is merely the biggest player in what is quickly becoming the next big technological trend. Other tech giants like Sony and Microsoft and lesser-known, but formidable, competitors Vuzix and Recon Instruments are next on the list to develop their own wearable gadgets. As the consumer tech world awaits the advent of wearable tech, where we all hope to exist Jetsons-like, will augmented reality (AR) apps define the future of smart eyewear? Forrester Research recently reported that over 20 million U.S. consumers are willing to wear augmented reality devices. Imagine the Possibilities Consumer AR applications are dominating the gaming industry. Yet consumers won’t be the only ones to adopt AR technology, wearables are quickly demonstrating their value in the enterprise. AR Device Architecture

5 Uses of Augmented Reality in Education Last week I mentioned augmented reality during a presentation and I could tell from the looks on some people's faces that augmented reality was a new thing to them. That's not uncommon. Sometimes when people hear "augmented reality" their minds drift to some vision of a science fiction world. The truth is augmented reality isn't science fiction, it's technology that is readily available now. To learn more about it, watch the short video below (if you're reading this in RSS click here for the video). Here are five potential uses of augmented reality in education today. Create 3D, augmented reality stories with ZooBurst. The Getty Museum offers a neat way to view art through augmented reality. Fetch! Spacecraft 3D is a free iPad app produced by NASA's Jet Propulsion Laboratory. Star & Planet Finder enables you to locate the planets and stars in the night sky through your iPhone or iPad.