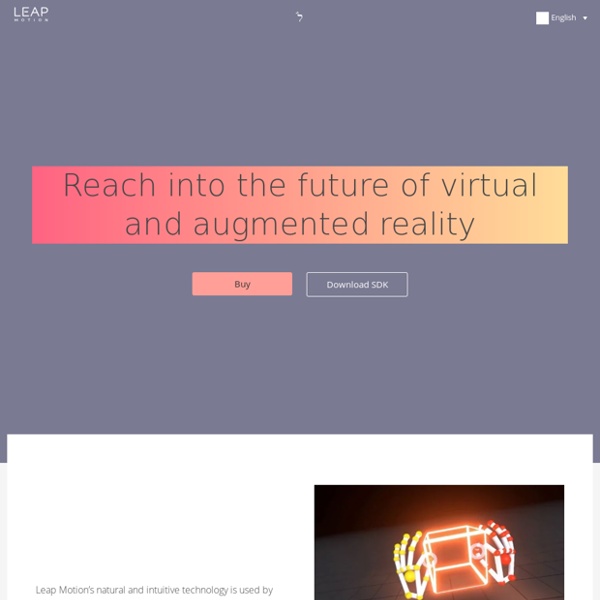 BasicTutorial – LeoCAD This tutorial is designed to show you the basics of LeoCAD. You will learn how to browse the pieces list, add pieces to a model, move and rotate pieces, create a model with multiple steps and change the camera position. Through these exercises, you will create a race car and driver. DexType’s Virtual Keyboard Software Lets Leap Motion Owners Type In Mid Air The motion-sensing Leap Motion Controller, which lets users eschew the traditional keyboard plus mouse combo and interact with their computers via gestures, started shipping to pre-order consumers this week. Apps with Leap Motion support are, as you’d expect, relatively thin on the ground at this point. They include games like Cut The Rope, a Top News app from the New York Times and some creative tools and education apps, to name a few.

Augmented reality - News & Rumors Posts Tagged «augmented reality» Google joins the VR war, invests in light field ‘cinematic reality’ company Magic Leap (updated) October 21, 2014 at 1:10 pmGoogle is getting into virtual reality. It was only a matter of time: With Google still looking for The Next Big Thing — and Facebook’s acquisition of Oculus VR, Sony’s Project Morpheus, and many other companies and startups taking a fresh look at VR over the last couple of years — it was forced to finally wade in.

Kiss Your Keyboard and Mouse Goodbye With The Leap Since Steven Spielberg expertly crafted it a decade ago, the world has been clamoring for a user interface similar to what was found in sci-fi thriller Minority Report. Even the inkling of flipping through applications and swiping screens in mid-air made geeks tingle all over, but aside from expertly developed hacks on the Xbox Kinect, nothing definitive seemed to break through and truly give the public that enticing functionality of the future. That is, until now. After more than five years of development, a proprietary technology has emerged that synthesizes the shape and movement of the human hand to produce movement onto a computer. PCs of the near future: Intel lays out next-gen plans LAS VEGAS--PCs on your coffee table, playing Monopoly. Super-thin ultrabooks. Voice and gestural computing. Intel showed these and more at their CES 2013 press conference.

A laser-cut wooden record that actually plays music If you've ever been curious about the materials that can be used for making a record, you can add a sheet of wood to the list. Instructables user amandaghassaei shows us exactly how to use a laser cutter to make functioning music records out of a piece of wood. And the results are as visually beautiful as they are aurally beautiful. The creator, Amanda Ghassaei writes: These records were cut on an Epilog 120 Watt Legend EXT to a theoretical precision of 1200dpi (the kerf of the cut and some tricks I used to avoid crashing the laser cutter dropped the actual precision down by ~1/6).

Lernstift, the first pen that vibrates when u make a mistake by Lernstift (Falk & Daniel) Hello everyone! We are two fathers (and a wonderful team) with one common goal: bringing more "good vibrations" to business, families and schools around the world by creating a unique digital pen that's both useful and fun. Lernstift builds a bridge between classic handwriting and the possibilities of digital technology, creating various new ways of note-taking, digital drawing and e-learning. We invite you to build this bridge with us. Welcome to our journey ...

Magic Leap We know what you're thinking: "Who the heck are we? What is this all about? Why aren't you saying more?" And you're right, we need to say a little more about what it is we're creating. So what is Magic Leap? 47 Mind-Blowing Psychology-Proven Facts You Should Know About Yourself I’ve decided to start a series called 100 Things You Should Know about People. As in: 100 things you should know if you are going to design an effective and persuasive website, web application or software application. Or maybe just 100 things that everyone should know about humans! The order that I’ll present these 100 things is going to be pretty random. So the fact that this first one is first doesn’t mean that’s it’s the most important.. just that it came to mind first.

CEVA Gesture Recognition solutions for mobile and home entertainment devices eyeSight is a leader in Touch Free Interfaces for digital devices. The company was established with the vision to revolutionize the way people interact with digital devices, to create an interaction which is both simple and intuitive.

Amazing! I just got accepted in their dev program, do anybody know how long it takes to get a dev kit? by simonw Jan 9

Week's Thomas Claburn notes that the Leap device produces an infrared light that reflects off objects in the four-cubic foot visible to its sensors, much like Microsoft's Kinect. Accordingly, The Leap device then interprets that data to direct the movement of objects on the screen of the connected computer by deewu Jun 2