Overpopulation is a myth 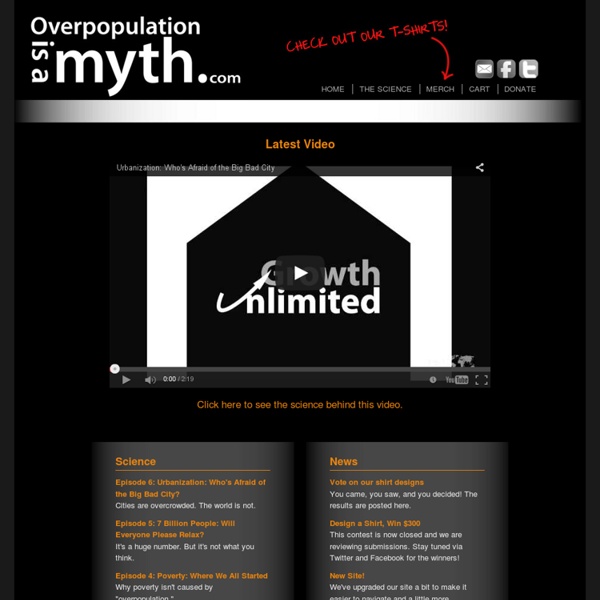 Population Research Institute PRI sends research teams around the globe, to gather hard data on abuses committed against women and families. This research has been used before Congress and has been, in many cases, instrumental in the passage of pro-life laws and amendments.

Pediatricians Call It What It Is – Child Abuse The American College of Pediatricians has released an in-depth report stating that the move to indoctrinate children with the idea that they can pick their gender amounts to child abuse. They are urging legislators and educators to reject all policies that would condition children to accept chemical and surgical distortions allowing people to impersonate the opposite sex. Some of the points made in their report include the following: Human sexuality is an objective biological binary trait. “XY” and “XX” chromosomes are genetic markers, not a disorder.No one is born with a gender. Everyone is born with a biological sex.

Dealing with Irreproducibility Researchers discuss the growing pressures that are driving increases in retraction rates at AACR. FLICKR, UNIVERSITY OF EXETERRecent years have seen increasing numbers of retractions, higher rates of misconduct and fraud, and general problems of data irreproducibility, spurring the National Institutes of Health (NIH) and others to launch initiatives to improve the quality of research results. Yesterday (April 7), at this year’s American Association for Cancer Research (AACR) meeting, researchers gathered in San Diego, California, to discuss why these problems to come to a head—and how to fix them. “We really have to change our culture and that will not be easy,” said Lee Ellis from the University of Texas MD Anderson Cancer Center, referring to the immense pressure researchers often feel to produce splashy results and publish in high-impact journals. C. William Sellers, global head of oncology at Novartis Institutes for Biomedical Research, described a similar experience.

This Vertical Farm in Chicago Is Cool, But Can It Really Be the Future? Humans will probably be living on Mars within a few decades, but we're still a long, long ways away from finding the next Earth. With our population booming and only about 37.7 percent of the Earth's land even suitable for farming, we're going to continue to have to develop higher and higher tech methods of producing food for ourselves. While productivity in traditional agriculture has increased markedly in the last century, there's still that question of limited space. That's created interested in various alternative methods, included the indoor, vertical farming methods espoused by the subject of the AP's video above.

Population 7 Billion - Pictures, More From National Geographic magazine One day in Delft in the fall of 1677, Antoni van Leeuwenhoek, a cloth merchant who is said to have been the long-haired model for two paintings by Johannes Vermeer—“The Astronomer” and “The Geographer”—abruptly stopped what he was doing with his wife and rushed to his worktable. Cloth was Leeuwenhoek’s business but microscopy his passion. He’d had five children already by his first wife (though four had died in infancy), and fatherhood was not on his mind. “Before six beats of the pulse had intervened,” as he later wrote to the Royal Society of London, Leeuwenhoek was examining his perishable sample through a tiny magnifying glass. Its lens, no bigger than a small raindrop, magnified objects hundreds of times.

Daytona Beach mayoral candidates share why they should be elected Editor’s note: Both the electronic pdfs and the ‘hard copies’ of this week’s Daytona Times incorrectly identify Patrick Henry as his brother, mayoral candidate Derrick Henry. We apologize for the error, which has been corrected in this story and will be corrected on next week’s front page. Daytona Beach residents could know on Aug. 14 who will be their next mayor. Gwen Azama-Edwards, left, and Edith Shelley, center, are the two female candidates for mayor of Daytona Beach. They will face Fred Hoffman and Derrick Henry. Current Zone 5 Commissioner Patrick Henry is shown in the photo on the right with Volusia County Councilman Josh Wagner, who is seeking to keep his District 2 seat.

How to create magic Oh, Seth. He wrote in “Who has a seat at the table?” this…. “When designing a new product or program, it’s pretty clear that a successful organization will invite:The lawyer, so you don’t break any laws.The CFO, so that you’ll understand how much this thing will cost and how well it will pay off.The CTO/Tech folks, so you’ll spec something that can actually be built and will work.And probably designers, marketers and lobbyists–all the people you need to bring the thing into the world.But where’s the person in charge of magic?In our quest to get it done, to survive the project, to avoid blame, to figure out a solution, it’s magic that gets thrown under the bus every time.Who is obsessed with creating delight, with building in remarkability, with pushing the envelope (every envelope–money, tech, policy) to get to the point where you’ve created something that people will be proud of, that will change things for the better, that will make a dent in the universe?