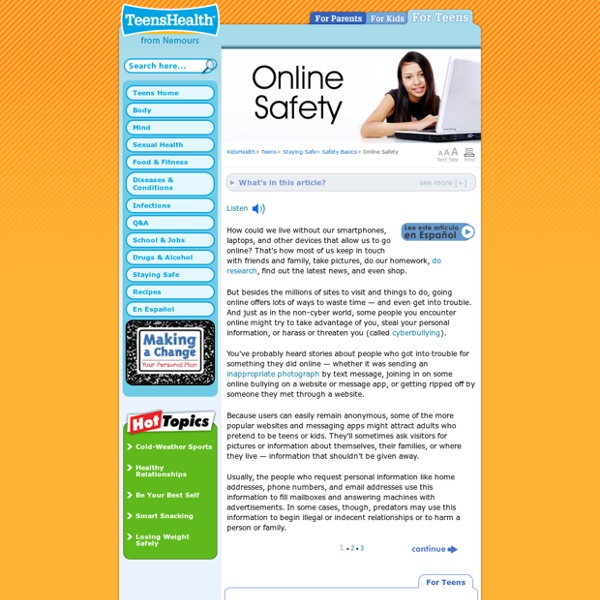 Listen Cyberbullying It's not just strangers who can make you feel uncomfortable. Cyberbullying refers to cruel or bullying messages sent to you online. These might be from former friends or other people you know. They can also be sent anonymously — in other words, on a website where everyone has a screen name, so teens being bullied might not even know who is bullying them. If you get these bullying messages online, it's often better to ignore them rather than answer them. Fortunately, most people never experience cyberbullying. Other Things to Consider Although email is relatively private, hackers can still access it — or add you to their spam lists. If you don't recognize the sender of a document or file that needs to be downloaded, delete it without opening it to avoid getting a virus on your device. When you're out and about with your devices, keep them secure. Reviewed by: Michelle New, PhD Date reviewed: October 2014 Related:  Augmented reality

Online Citizenship Explained by Common Craft Most people are good citizens in the offline world. They are kind to others, they obey laws and want their community to be a better place. But these days many of us are also citizens of the online world. We participate in discussions, share photos, and get help using websites. Stewart is a good guy. But when Stewart goes online, he seems to become a different person. He often writes provocative comments on blogs and video websites without contributing anything valuable. Recently a friend recognized his online name on a few comments and gave him a call. Stewart was speechless - he never meant to hurt anybody. But that all changed. Now he sees that citizenship means giving people the same respect he does in the real world, even when he disagrees with them.

Internet Safety Tips for Kids and Teens Internet Safety Tips for Kids and Teens 1. Spend time having fun with your parents online and helping them understand technology! 2. Never post your personal information, such as a cell phone number, home number, home address, or your location on any social networking site or through mobile apps like Snapchat or Instagram. 3. 4. 5. 6. 7. 8. 9. 10. Source: Netwsmartz.org and safekids.com. Resources for Information On Internet Safety for Kids Resources for Information On Internet Safety for Teens What is Digital Citizenship? Introduction We have many goals and dreams. To achieve our goals and get closer to our dreams, we have to work. Although we can do a quite a lot of work individually, we can accomplish even more when we work together with others. This is why humans form communities. As members of a community we also use resources, services, and tools to strengthen our group and make our work easier to complete. Sometimes, we, along with others, form groups in an online environment. Essential Questions: What is digital citizenship? Module Minute The guidelines for becoming a good digital citizen can be grouped into three over arching categories: Respect, Connect, and Protect. Key Terms access commerce communication literacy etiquette law rights and responsibilities health and wellness security digital citizenship What to Expect

Augmented Reality in Education - Teaching and Learning nuts and boltsTeaching and Learning nuts and bolts I have been using augmented reality for a while now. It is a great tool to engage learners, especially with literacy. My tool of choice for this is Layar, I find the ability to create the AR and change it regularly makes it a great tool for the classroom. Like this: Like Loading... 3 Steps to Creating an Awesome Virtual Museum in Class You're spending an afternoon browsing the exhibits at an art museum. If you're anything like me, you'd probably appreciate the art a lot more if you could bring someone along that could explain the history and nuances of the pieces on display. Now imagine pointing a device at the painting and seeing it morph into a dynamic video giving you all the information you wanted about the art. Virtual reality replaces the real world with an artificial, digital environment. The Virtual Museum I've worked with teachers at several schools to created virtual museums - student created exhibits that use augmented reality to display student videos when a device is pointed at an exhibit. We used a popular augmented reality app called Aurasma. Visitors were sent an email asking them to download the free Aurasma app and bring their device. We talk about the importance of "depth" in education. I'm sure you'll come up with lots of ideas of your own. A. Media: Create video. B. C. Sam Gliksman

32 Augmented Reality Apps for the Classroom by edshelf: Reviews & recommendations of tools for education Augmented Reality (AR) is a growing field of technology where real life is modified and enhanced by computer-generated sights and sounds. The most common use of AR can be seen through mobile apps. Point your device’s camera at something that the app recognizes, and it will generated a 3D animation or video superimposed over whatever is on your camera’s screen. The effect makes the computer-generated item appear like it’s really there. Want to see how it works? App developers are building AR apps for fun, educational, and commercial uses. Which augmented reality apps do you use? 32 Augmented Reality Apps for the Classroom From edshelf Image attribution flickr user turkletom Augmented Reality Brings New Dimensions to Learning Editor's Note: Drew Minock, who co-wrote this piece, is an elementary teacher, co-founder of the popular education blog Two Guys and Some IPads, and is one of the voices on "The Two Guys Show" podcast. Imagine living in the magical world of Harry Potter, where the school hallways are lined with paintings that are alive and interactive. Now imagine creating an atmosphere like that for your students. Augmented Reality (AR) allows educators and students to do just that: unlock or create layers of digital information on top of the physical world that can be viewed through an Android or iOS device. Most people who interact with AR for the first time have a mind-blowing experience but fail to consider classroom applications. In our elementary school classrooms, we use AR to create active learning experiences hitherto inconceivable, and in the process redefine the learning space! Classroom Applications Not Just Another Fad There are endless ideas and possibilities for using AR.

6 Platforms to Create Augmented Reality When most people first try augmented reality(AR) in education, they start with applications that have the AR content already built into the app. Apps like AR Flashcards, PBS Kids CyberChase Shape Quest, and Crayola Color Alive have this, and are a great way to get your feet wet. As educators, we know the power of creation. Hopefully one of the following 6 platforms will help you and your students dive in to creating your own augmented reality! The first creation platform is from our friends at DAQRI! 4D Studio will allow users to create augmented reality campaigns with no prior coding knowledge, just basic computer skills. * DAQRI 4D Studio is currently being updated and is* unavailable to new users. tuned for more exciting information later this year! Screenshots from 4D Studio Next is the augmented reality platform from Aurasma. *Metaio was acquired by Apple and is no longer available* I. II. In both of the cases, it is possible to release the AR scenario as a channel in Junaio.