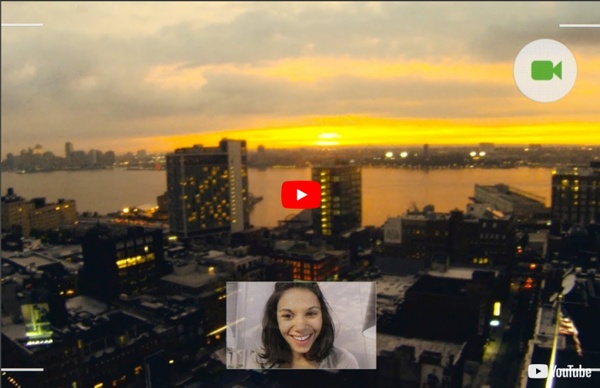 El video: excelente herramienta para comunicar. Lo invito a contactarme Wiwi Title Powered by Google Wins The Internet With A Live Skydiving Demo Of Google Glass (Now With Video!) Well, that was unexpected. Google’s Sergey Brin just stepped on stage at Moscone West to deliver a demo of Google Glass, and it involves a Google+ hangout conducted via their connected eyewear. Oh, and some guys just jumped out of a zeppelin. “Being able to share what you’re seeing is amazing,” Brin said. Four skydivers all equipped with Google Glass hardware just plummeted toward the ground in San Francisco, and video quality in the hangout as about as good as one would expect considering the circumstances. In fact, the hardware may have changed a bit since early demos, as the video seems considerably clearer than the infamous trampoline video that made the rounds a few weeks back.

word watch Biegert & Funk presents the world's first wristwatch in words at Baselworld For the first time, Biegert & Funk is exhibiting a completely new kind of wristwatch, the QLOCKTWO W, at Baselworld. QLOCKTWO W does not show the time with hands or digits. Time is indicated on this purist watch as readable text, turning it into a statement: "It is half past nine". 10 Upcoming Technology That May Change The World We have seen great leaps in digital technology in past the past five years. Smartphones, cloud computing, multi-touch tablets, these are all innovations that revolutionized the way we live and work. However, believe it or not, we are just getting started. Technology will get even better. In the future, we could live like how people in science fiction movies did. (Image Source: YouTube)

Graphical User Interfaces (GUI) « Love to learn Yesterday at CIID we started our new GUI (Graphical User Interfaces) block. During the next two weeks the main foucs will be a hands on approach through a user centered development process for a GUI concept. The course is being taught by Alex Wiethoff (CIID) and Neils Clausen-Stuck. Neils worked as a senior interaction designer at IDEO for 7 years up intill joining Kontrapunkt in 2008. The course will be broken into two, with Half being a series of short exercises and lectures that will look into key aspects, contexts, history, applications and limiting factors that influence the design of GUI and the other half will be developing a concept with an application specific GUI that offers value in the elderly care space. Emprendedor Digital: Primeros pasos. #Tertulia en El Despertador. Lo invito a contactarme Wiwi Title Powered by Close window Minimize Toolbar Click here to see who's online and from where in the world

Augmented reality glasses debut on Google co-founder's face Google's Project Glass made its public debut on the face of Google co-founder Sergey Brin on Thursday night, prompting new excitement about the project, fresh predictions of future marvels -- or horrors -- and inspiration, most likely, for new parodies of the funky, futuristic headset. In photos, Brin appears comfortable in the augmented-reality specs as he stands alongside tech guru Robert Scoble at a charity event in San Francisco. Interestingly, the event at which the futuristic eyewear made its first appearance was Dining in the Dark for the Foundation Fighting Blindness. Scoble wrote about seeing Brin and the glasses on social media, saying he saw "bluish light" that flashed off of Brin's right eyeball. But Brin wasn't handing the glasses around for people to inspect.

fuel cell charger Fuel cell gadget charger PowerTrekk is finally hits store shelves in the States. Starting May 2012, you can head to outdoor equipment store REI to purchase this nifty device, which charges electronics with only water. PowerTrekk first debuted at the Consumer Electronics Show 2012. The small device can charge cell phones, MP3 players, and eventually laptops with the addition of mere tap water. The key is a special reaction that produces hydrogen on demand, which is stored in a hydrogen fuel cell battery. All you have to do is pour water into the device to start charging whatever your heart desires (so long as it can be charged with a USB cable). Nokia decline sparks Finnish start-up boom 12 December 2012Last updated at 20:03 ET By Mark Bosworth BBC, Helsinki Slush has become the largest start-up conference in northern Europe Nokia once dominated the worldwide mobile phone market but its influence has waned against strong competition in the smartphone sector. Finland's largest company has been forced to downsize, with thousands of employees facing redundancy.

This 'New Future' gadget has already been invented and broadcasted by IBM in Year 2000. Check this on Youtube by avayaoli May 5

This video with an integrated phone and pupil control posted by Google on youtube - titled "One day ...". (PS: You'd have maybe one or two more accidents - running against a lamppost - considered, but otherwise it will probably look like this ... time is against the lampposts, it probably may soon be a warning app available.) by avayaoli Apr 13