Onvert.com - QR code and augmented reality in one 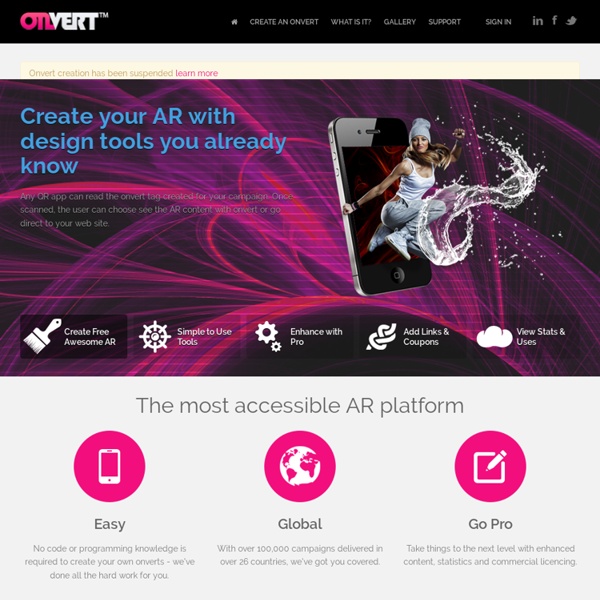 Anatomy 4D Changes the Way We Learn About the Human Body Anatomy 4D, a free mobile app from DAQRI, gives students and educators the ability to explore every detail of the human body and all its systems in stunning detail. The app, which has been incredibly popular with the education community, allows users to isolate bodily systems: muscular, skeletal, circulatory and more, to see every detail and how each one works together. All you need to do is print the targets below and scan them with your phone’s camera. We’ve recently added a new target that gives a detailed, interactive look into the human heart - a learning experience previously only accessible in a gross anatomy lab. 4D embodies the way today's students can use technology to comprehend complex concepts in a much easier and more engaging way.

Ingress Scrat's nutty pursuit of the cursed acorn has world-changing consequences. Manny, Diego, and the rest of the herd are suddenly at the edge of a continent that's cracking wide open! Now they're separated from home and family while floating out to sea! Sid's no match for this danger alone; he needs your help to explore the unknown, rescue his friends Manny and Diego, and save every animal in the herd from menacing dinosaurs and more!

curricular Apps based on augmented reality technology for high school students and teachers Dear Zientia user, Today we are excited to announce an important change at Zientia. After a fantastic year with you, receiving feedback about Zientia and your experience with us, we have collected all of your ideas and transformed them into a new high-quality product for education called Arloon. Arloon is our participation in the digital education revolution. We wish to share our education solution around the world, contributing to the improvement of education globally. We have started by creating unique learning experiences with our educational apps, but this is just the beginning.

Finding Out What the Past Smelled Like — The Atlantic Augmented reality could change the way we understand—and experience—history. It was the smell that hit me first, a heady mixture of roasting meat, woodsmoke, and farmyard manure. Nearby I could hear a low murmured conversation—but the words were muffled and unclear.

3 Steps to Creating an Awesome Virtual Museum in Class You're spending an afternoon browsing the exhibits at an art museum. If you're anything like me, you'd probably appreciate the art a lot more if you could bring someone along that could explain the history and nuances of the pieces on display. Now imagine pointing a device at the painting and seeing it morph into a dynamic video giving you all the information you wanted about the art. Welcome to augmented reality. Virtual reality replaces the real world with an artificial, digital environment.

Send Your Students on a QR Code Treasure Hunt QR Codes are all around us today. Open a magazine, a catalog, or glance at a bulletin board and you're likely to see a QR code. QR Codes make it easy to jump to a website or download a file on your mobile device. QR codes and QR code reader apps are one of the many ways that cell phones can be used in schools for academic purposes. To that end, Russel Tarr the QR Treasure Hunt Generator. The QR Treasure Hunt Generator provides you with all of the things you need to get started creating your own QR codes and using them in your classroom.

Augment - A Platform for Sharing 3D Models in Augmented Reality A couple of weeks ago Heidi Samuelson shared some good ideas for using the augmented reality app Aurasma in math and reading lessons. Another augmented reality tool that you might consider using is called Augment. Augment is a platform through which you can upload images to have them turned into 3D models that your students can then view through their iPads or Android tablets. The 3D models that are displayed are referred to as "Trackers" on the Augment platform. Watch the video below to see them in action.

Stackable Brain Specimen Coasters That Form A 3D Brain On Your Table This cool 10-piece set of glass brain coasters will let you show your guests just how brainy they are. When stacked in the correct order (which is easy to remember because of the labels), the brain slices on these coasters form a 3D coaster on your tabletop! The 4”x4” set of 10 Brain Specimen coasters goes for $19.99 on Thinkgeek, and has rubber legs to keep them from scratching whatever they’re meant to protect. More info: thinkgeek.com (h/t: laughingsquid)

Good Ideas for Using Augmented Reality in Elementary School Math and Reading This week I am giving some guest bloggers the opportunity to share their ideas and experiences. This is a post from Heidi Samuelson. One of the most exciting pieces of technology I’ve tried with my students this year has been Augmented Reality…There are many different apps for Augmented Reality, but the one I’ve had the most success with is Aurasma (available for iOS and Android). Reading non-fiction books can be challenging for young minds. However, when you add some Augmented Reality books come to life! Ultimate Dinosaurs: Augmented Reality Not only will you see new dinosaurs in the Ultimate Dinosaurs exhibition, you'll experience them in new ways through augmented reality (AR). AR layers virtual experiences over the real environment to bring our great Southern dinosaurs to life! This is the first time Cincinnati Museum Center is using AR technology in an exhibition setting – bringing these giants to life and encouraging you to look at them from a new perspective. Three AR stations in the exhibition allow you to virtually flesh out dinosaur skeletons.

Littératie médiatique multimodale Our argument is that litteracy, as a technology for delivering language, in many ways enhanced and empowerment language (« leveled up » and « powered up » language to use video-game speak). It gave langage new skills (properties, powers) and enhanced old ones. It also attenuated some of language’s capacities or changed where, how, why, and when they are applied or used. We will make a similar argument about today’s digital media. transmedia storytelling Undoubtedly, all of the entertainment industries—dance, theatre, gaming, comic books etc—have had to adjust to technological and cultural convergence. The music industry’s decline exemplifies the power of such phenomena. But the television and film industries, though primed to fully transition into the digital age, have neglected to make the quantum leap for two reasons. First, media executives have viewed the development of new technologies as threats to the industry, rather than gateways for new possibilities. And second, the television and film business traditionally expects the consumption of their content to be passive and non participatory, an assumption which sharply contrasts the socially connected, collectively intelligent, and increasingly empowered audience of today. In this chapter, I apply these criticisms to both the television and film industry.