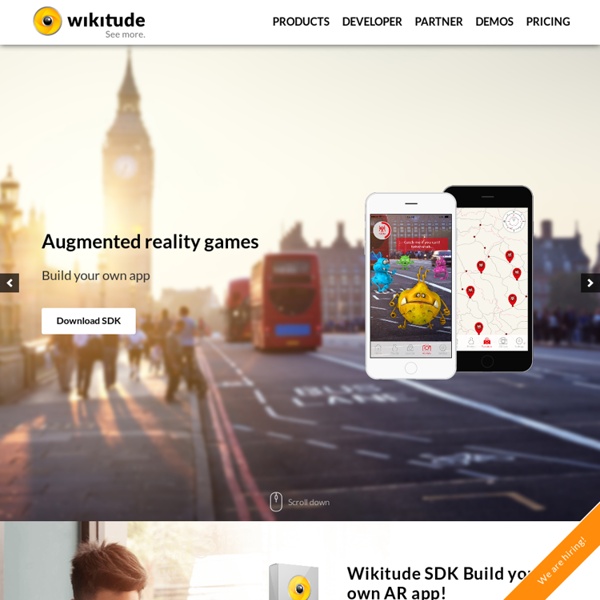 …has been voted “Best Augmented Reality Browser” by the AR community 4 years in a row. Explore and understand your world, simply “See more.” Discover sights, pubs, shopping and even people around you. Wikitude will help you in new surroundings as well as in your own neighborhood. Are you looking for something? Perhaps an Italian restaurant nearby?

LED Lights Make Augmented Vision a Reality LED Lights Make Augmented Vision a Reality Okay, this is just freaky. We know LED lights are versatile enough to be used for practically anything, but LED contact lenses? International Virtual Heritage School 2012 The 1ST INTERNATIONAL VIRTUAL HERITAGE SCHOOL: virtual museums, communication and digitisation, organised by leading European institutions in the field of Virtual Heritage and Virtual Museums (V-MUST.NET) in cooperation with the main worldwide organisation on conservation and restoration (ICCROM), involved participants in interactive laboratories on Virtual Museums and Virtual Heritage. It was held from the 12th to the 17th of NOVEMBER 2012 in Paestum (Salerno) Italy 20 participants coming from all over the world have been selected by the school scientific committee. Full board accommodation was provided for the selected participants, while the best 3 applicant have obtained also a further grant, covering their travel costs. The call is now closed, another one will be published next year (2013).

The Key To College Success: Summer The race is over. You (or your son or daughter) got into college, accepted the offer of admission, bought the sweatshirt with your school’s logo. There’s just one obstacle standing in the way: summer. A growing body of research shows that the summer before college can be a treacherous time for teenagers, poised as they are between home and high school on the one side, and a more challenging and independent existence as a college student on the other. (MORE: What High School Graduation Speeches Should Say but Don’t) Take drinking, for example.

Loser Generated Content: From Participation to Exploitation In this article [1] some of the critical aspects of Web 2.0 are mapped in relation to labor and the production of user generated content. For many years the Internet was considered an apt technology for subversion of capitalism by the Italian post–Marxists. What we have witnessed, however, is that the Internet functions as a double–edged sword; the infrastructure does foster democracy, participation, joy, creativity and sometimes creates zones of piracy. But, at the same time, it has become evident how this same infrastructure also enables companies easily to piggyback on user generated content. Different historical and contemporary examples are provided to map how the architecture of participation sometimes turns into an architecture of exploitation. A Great Cities Initiative of the University of Illinois at Chicago University Library.

Panorama Mapping and Tracking Panorama created in real-time on the mobile phone. Summary Tracking for outdoor Augmented Reality (AR) applications has very demanding requirements: It must deliver an accurate registration with respect to a given coordinate system, be robust and run in real time. Despite recent improvements, outdoor tracking still remains a difficult problem. We implemented a system for the online creation and simultaneous tracking of panoramas. Our system uses a natural feature mapping and tracking method, which is sufficiently efficient and robust to allow 3 degrees of freedom tracking on mobile phones. Android-powered Google Glasses: The augmented reality HUD dream is coming It’s about time: By the end of 2012, Google will launch a pair of Android-powered, augmented reality, head-up display (HUD) glasses. Anonymous Google employees, speaking to The New York Times, say that the glasses will resemble a pair of Oakley Thumps (pictured above), will have 3G or 4G connectivity, a forward-facing camera, GPS, and a full array of movement sensors. They will cost “around the price of current smartphones.” Unlike Google’s upcoming home entertainment system, a pair of wearable Google Glasses makes an awful lot of sense. Google’s arsenal of real-time, mobile, location-aware services is second to none; Search, Latitude, Goggles(!), Maps, Places/Hotpot, Navigation, AdSense, Transit, Wallet, Offers, Product Search, Translate, Voice, Music — each and every one of them could be built into a pair of Android-based spectacles, and boy would the end result be awesome.

Culture Must Always Be a Commons Nick Poole, CEO, Collections Trust In case I haven't already made it abundantly clear - I love museums, libraries and archives. I think that investing in professional communities who bring together and protect our shared heritage and make it available for use and enjoyment is one of the most important marks of an enlightened society. 12 month program Are you looking to be part of a fun, exciting, challenging graduate program where you can add value and make a real difference? Join Vodafone Graduate Program ”Discover”! It is a 12 month program giving you the opportunity to work in four different areas in the organization 12 months, 4 roles, your chance to shine What’s in it for me ?

Interactivity is Evil! A critical investigation of Web 2.0 Central to Web 2.0 is the requirement for interactive systems to enable the participation of users in production and social interaction. Consequently, in order to critically explore the Web 2.0 phenomenon it is important to explore the relationship of interactivity to social power. This study firstly characterises interactivity in these media using Barry’s (2001) framework differentiating interactivity from disciplining technologies as defined by Foucault. Contrary to Barry’s model though, the analysis goes on to explore how interactivity may indeed function as a disciplining technology within the framework of a neoliberal political economy. Table 1 Interactivity and Web 2.0 These ‘non–disciplinary’ features of interactivity can be readily traced within the participatory media of Web 2.0. Flexible time: In contrast to the regime of broadcasting, participatory media is predominately a ‘pull’ medium based on persistent databases rather than temporally bound signal distribution.

OpenGL ES 2.0 for iOS, Chapter 3 - Fundamentals of 3D Programming Before we start writing code, we need to go over some of the basics concept and algorithms used in 3D programming. Essentially, we need to make sure we're all speaking the same language. In this chapter, we're going to discuss some of the most basic and fundamental concepts underlying the use of OpenGL ES 2.0, as well as some of the data structures and algorithms that we'll need to create and manipulate virtual three-dimensional objects.