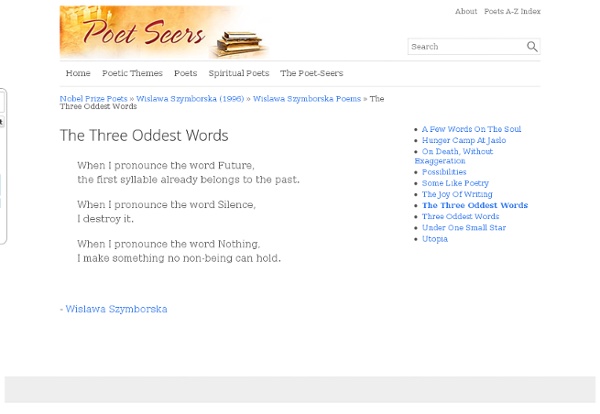 Poet Seers » Best Procrastination Tip Ever Post written by Leo Babauta. Your first thought as you look at this article will be, “I’ll read this later.” But don’t. It’ll take you two minutes. I’ve written the book on ending procrastination, but I’ve since come up with a very simple technique for beating everyone’s favorite nemesis. Try it now: Identify the most important thing you have to do today. Clear away distractions. Sit there, and focus on getting started. Pay attention to your mind, as it starts to have urges to switch to another task. But don’t move. Notice also your mind trying to justify not doing the task. Now just take one small action to get started. Get started, and the rest will flow.

untitled Admired in her time, this author fell quickly from view, but her genius is now being rediscovered. The literary star known as “L.E.L.,” pen name of the British poet, novelist, and critic Letitia Elizabeth Landon (1802-1838), rose to prominence around 1824. But after her death in 1838 in Africa, her fame went into occultation, and her works were largely lost from public view until the last two decades. Letitia Landon’s father, John Landon (1756-1824), of a Herefordshire family, had served in the British Navy and voyaged to the southern coast of Africa and to Jamaica. However, after the end of the Napoleonic Wars, in 1815, the family finances suffered from the decline of her father’s firm and the severe agricultural depression that developed during peacetime. In subsequent years, Landon published several more volumes of poetry: The Troubadour (1825); The Golden Violet (1827); and The Venetian Bracelet (1829). Landon came in for a large share of such criticism. Recommended Readings:

Unified Reality Theory untitled Jennifer Hardner ’01Cedar Crest College A Biography of Landon using "Love’s Last Lesson" Letitia Elizabeth Landon was born in London in 1802. She had a younger brother and a younger sister. In her early teens, a neighbor, editor William Jerdan, discovered her verse, and she instantly was thought of as a child prodigy. Her verse became regularly published in the Literary Gazette, and her books soon followed suit. Being single, untitled, popular, and free-willed, Landon was the target of many poisoned darts. I have concluded that two factors led to the early demise of Letitia Elizabeth Landon: the men throughout her life, and the uptight views of the English. I think "Love’s Last Lesson" closely resembles Landon’s desires and frustrations, because it is not surprising that she wished to be able to forget all the rumors about herself, and the pain caused by the men in her life, "…forgetfullness will be/ A mercy to me." Works Cited British Authors of the Nineteenth Century. Writers.

» be able to walk away In any kind of negotiation, your ability to walk away is your strongest tool. Those who can walk away from the negotiation — legitimately walk away, not just make a show of it — are in the strongest position. Those who are convinced they need to make the deal are in the weakest position. This is true of negotiating when you’re buying a car, closing the sale of your new home, haggling in a foreign flea market, or trying to get a raise. It’s also true of anything in life. Know that there’s almost nothing you can’t walk away from. If you are convinced you need a nice house with a walk-in closet and hardwood floors and a huge kitchen, you now have a weakness. If you are convinced that you need Stabucks grande lattes every day, or an iPhone or iPad, or an SUV or Cooper Mini or BMW … you are in the weak position, because you can’t give it up. If you know that there’s almost nothing you can’t walk away from, you can save yourself tons of money.

untitled First the poem, then the discussion. Or really, if you have time, first the poem. Then a a few moments to think/grieve, and then the discussion. When We Two Partedby George Gordon, Lord Byron When we two partedIn silence and tears,Half broken-hearted,To sever for years,Pale grew thy cheek and cold,Colder thy kiss;Truly that hour foretoldSorrow to this. The dew of the morningSank chill on my brow—It felt like the warningOf what I feel now.Thy vows are all broken,And light is thy fame:I hear thy name spoken,And share in its shame. They name thee before me,A knell to mine ear;A shudder comes o’er me—Why wert thou so dear? In secret we met—In silence I grieveThat thy heart could forget,Thy spirit deceive.If I should meet theeAfter long years,How should I greet thee? Go on. Let's get the technical stuff out of the way: four stanzas, eight lines each, with an ABABCDCD rhyme scheme (the third stanza can also be read as ABABACAC). The power of this poem comes from multiple sources.

4 Brilliant Remarks From History’s Wisest American If I have a hero, it’s Ralph Waldo Emerson. He represents to me humanity’s potential: wise, self-reliant, honest, unencumbered by conformity, and able to enjoy every little detail of life as if they were all miracles. He possessed the hallmark of a human being ahead of his time: he was hailed as a genius and simultaneously reviled as a subvert. His views were radical for his era, but his wisdom could not be denied, even by his detractors. Even Herman Melville, author and professed Emerson-hater, later described him as “a great man.” I am convinced that all of the secrets to personal peace and freedom reside within the ideas recorded in Emerson’s essays and lectures. Perhaps this is why he is so widely quoted and so scarcely read. It’s worth the effort. “People seem not to see that their opinion of the world is also a confession of their character A person’s opinion of the world they live in really seems to be a foolproof litmus test for their strength of character. “I hate quotations.

untitled The Sonnet form is one of the strictest and most difficult forms of poetry in the English language. But if done correctly, it can be one of the most beautiful pieces of poetic art, and many great poets have made it so. The first sonnets were written by the Italian poets. The form was probably invented by Giacomo da Lentini, head of the Sicilian School between 1230 and 1266 under Frederick II, the Holy Roman Emperor during most of that time. Another Italian poet, Guittone d’Arezzo, adopted the form and migrated it to Tuscany. While Dante Alighieri, Guidi Cavalcanti and other Italian poets wrote in the form, it was Francesca Petrarch who would build his reputation as a sonneteer. The Italian Sonnet, also called Petrarchan Sonnet after its most famous and prolific user, is characterized by its form and rhyme scheme. The octave is made up of two quatrains with the following rhyme scheme: abba. Another characteristic of this poetic form was the volta, or turn.