Ode on a Grecian Urn. Tracing of an engraving of the Sosibios vase by Keats "Ode on a Grecian Urn" is a poem written by the English Romantic poet John Keats in May 1819 and published anonymously in the January 1820, Number 15 issue of the magazine Annals of the Fine Arts (see 1820 in poetry). 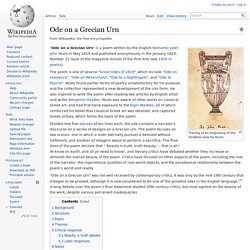 The poem is one of several "Great Odes of 1819", which include "Ode on Indolence", "Ode on Melancholy", "Ode to a Nightingale", and "Ode to Psyche". Keats found earlier forms of poetry unsatisfactory for his purpose, and the collection represented a new development of the ode form. He was inspired to write the poem after reading two articles by English artist and writer Benjamin Haydon. Keats was aware of other works on classical Greek art, and had first-hand exposure to the Elgin Marbles, all of which reinforced his belief that classical Greek art was idealistic and captured Greek virtues, which forms the basis of the poem. "Ode on a Grecian Urn" was not well received by contemporary critics. Background[edit] Poem[edit]

Falling by James L. Dickey. Poetry for Everyday Life. The sentence is only worth quoting because in 28 words it contains four metaphors. 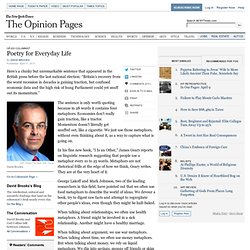 Economies don’t really gain traction, like a tractor. Momentum doesn’t literally get snuffed out, like a cigarette. We just use those metaphors, without even thinking about it, as a way to capture what is going on. In his fine new book, “I Is an Other,” James Geary reports on linguistic research suggesting that people use a metaphor every 10 to 25 words. Metaphors are not rhetorical frills at the edge of how we think, Geary writes. George Lakoff and Mark Johnson, two of the leading researchers in this field, have pointed out that we often use food metaphors to describe the world of ideas. When talking about relationships, we often use health metaphors. 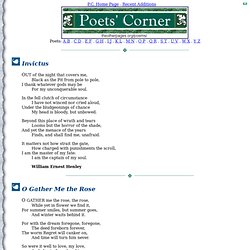 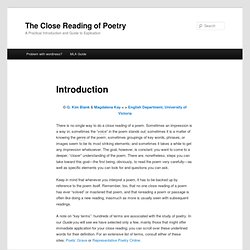 Kim Blank & Magdalena Kay < > English Department, University of Victoria There is no single way to do a close reading of a poem. Sometimes an impression is a way in; sometimes the “voice” in the poem stands out; sometimes it is a matter of knowing the genre of the poem; sometimes groupings of key words, phrases, or images seem to be its most striking elements; and sometimes it takes a while to get any impression whatsoever. The goal, however, is constant: you want to come to a deeper, “closer” understanding of the poem. There are, nonetheless, steps you can take toward this goal—the first being, obviously, to read the poem very carefully—as well as specific elements you can look for and questions you can ask. Keep in mind that whenever you interpret a poem, it has to be backed up by reference to the poem itself. The Poets. Glossary of Rhymes. The following terms occur frequently in discussions of poetry and critical writing, but not with absolute consistency. 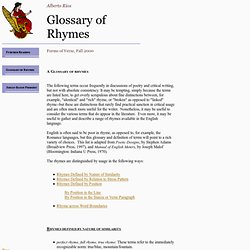 It may be tempting, simply because the terms are listed here, to get overly scrupulous about fine distinctions between, for example, "identical" and "rich" rhyme, or "broken" as opposed to "linked" rhyme--but these are distinctions that rarely find practical sanction in critical usage and are often much more useful for the writer. Nonetheless, it may be useful to consider the various terms that do appear in the literature. Even more, it may be useful to gather and describe a range of rhymes available in the English language. English is often said to be poor in rhyme, as opposed to, for example, the Romance languages, but this glossary and definition of terms will point to a rich variety of choices. This list is adapted from Poetic Designs, by Stephen Adams (Broadview Press, 1997), and Manual of English Meters, by Joseph Malof (Bloomington: Indiana U Press, 1970).

VirtuaLit: Elements of Poetry. Poetry and Literature. Poet Laureate, Juan Felipe Herrera Herrera took up his duties as the 21st Poet Laureate on Tuesday, September 15th—the first day of Hispanic Heritage Month—with a reading of his work at the Library’s Coolidge Auditorium. 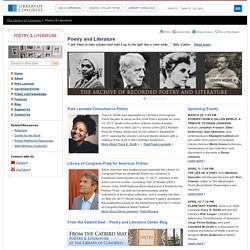 Where a poem makes reference to another poem or text. 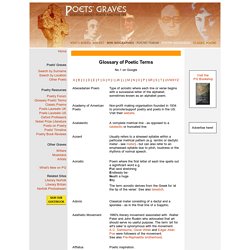 For example, the 14th line of The Prelude by William Wordsworth 'The earth was all before me' alludes to one of the final lines of Paradise Lost by John Milton 'The world was all before them'. Classic Poems.