Teacher's pack sur Dylan Thomas. General links about poetry. Different voices from the Commonwealth. Yeats When you are Old. Carol Duffy Valentine. Siegfried Sassoon: The reluctant hero. More relevant than ever … Siegfried Sassoon Photograph: © Bettmann/CORBIS I once came across a letter written by a military officer to a soldier's mother. 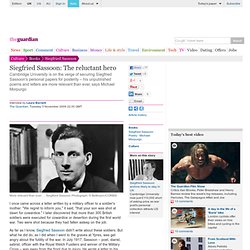 "We regret to inform you," it said, "that your son was shot at dawn for cowardice. " I later discovered that more than 300 British soldiers were executed for cowardice or desertion during the first world war. Two were shot because they had fallen asleep on the job. As far as I know, Siegfried Sassoon didn't write about these soldiers. Sassoon's letter, titled A Soldier's Declaration, was published in newspapers and read out in the Commons; it very nearly got him executed. This collection is vital to our understanding of war both then and now. The thing that sets Sassoon's work apart is that he was so connected to his soldiers. Can I forget the voice of one who cried For me to save him, save him, as he died?

I will remember you, and from your wrongs Shall rise the power and the poignance of my songs And this shall comfort me until. Gwendolyn Brooks, Whose Poetry Told of Being Black in America, Dies at 83. Gwendolyn Brooks, who illuminated the black experience in America in poems that spanned most of the 20th century, winning the Pulitzer Prize in 1950, died yesterday at her home in Chicago. 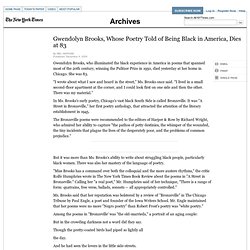 She was 83. ''I wrote about what I saw and heard in the street,'' Ms. Brooks once said. ''I lived in a small second-floor apartment at the corner, and I could look first on one side and then the other. There was my material.'' In Ms. The Bronzeville poems were recommended to the editors of Harper & Row by Richard Wright, who admired her ability to capture ''the pathos of petty destinies, the whimper of the wounded, the tiny incidents that plague the lives of the desperately poor, and the problems of common prejudice.'' But it was more than Ms. ''Miss Brooks has a command over both the colloquial and the more austere rhythms,'' the critic Rolfe Humphries wrote in The New York Times Book Review about the poems in ''A Street in Bronzeville.'' Ms. But in the crowding darkness not a word did they say. sweets. 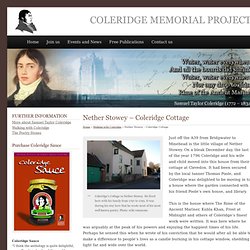 He lived here with his family from 1797 to 1799. It was during his stay here that he wrote most of his most well known poetry. Photo: wiki commons Just off the A39 from Bridgwater to Minehead is the little village of Nether Stowey. On a bleak December day, the last of the year 1796 Coleridge and his wife and child moved into this house from their cottage at Clevedon. This is the house where The Rime of the Ancient Mariner, Kubla Khan, Frost at Midnight and others of Coleridge’s finest work were written. Wystan Hugh Auden - Funeral Blues. This poem can be found under at least four titles. 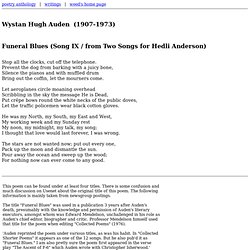 There is some confusion and much discussion on Usenet about the original title of this poem. The following information is mainly taken from newsgroup postings. The title "Funeral Blues" was used in a publication 3 years after Auden's death, presumably with the knowledge and permission of Auden's literary executors, amongst whom was Edward Mendelson, unchallenged in his role as Auden's chief editor, biographer and critic. Professor Mendelson himself used that title for the poem when editing "Collected Poems" (1976). 'Auden reprinted the poem under various titles, as was his habit. Hunchback in the Park Analysis Using SMILE. Shakespeare Sonnets – Top 5 Shakespeare Sonnets. The Shakespeare sonnets are considered by many to be the most romantic poems ever written. 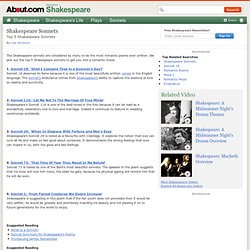 We pick out the top 5 Shakespeare sonnets to get you into a romantic mood. 3. Sonnet 29: 'When In Disgrace With Fortune and Men's Eyes' Shakespeare’s Sonnet 29 is noted as a favourite with Coleridge. It explores the notion that love can cure all ills and make us feel good about ourselves. 4. Sonnet 73 is hailed as one of the Bard's most beautiful sonnets. 5. Shakespeare is suggesting in this poem that if the fair youth does not procreate then it would be very selfish; he would be greedily and pointlessly hoarding his beauty and not passing it on to future generations for the world to enjoy.