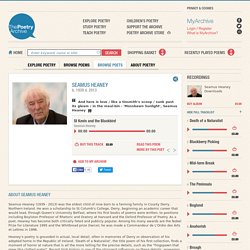 He won a scholarship to St Columb's College, Derry, beginning an academic career that would lead, through Queen's University Belfast, where his first books of poems were written, to positions including Boylston Professor of Rhetoric and Oratory at Harvard and the Oxford Professor of Poetry. As a poet, Heaney has become both critically feted and publicly popular. Among his many awards are the Nobel Prize for Literature 1995 and the Whitbread prize (twice); he was made a Commandeur de L'Ordre des Arts et Lettres in 1996. Owen Sheers: The blue-eyed boy and bard. "Look," says Owen Sheers, pulling up a blue sleeve. 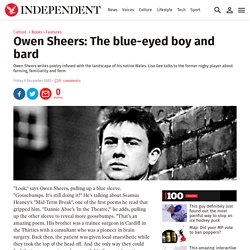 "Goosebumps. It's still doing it! " He's talking about Seamus Heaney's "Mid-Term Break", one of the first poems he read that gripped him. "Dannie Abse's 'In the Theatre,"' he adds, pulling up the other sleeve to reveal more goosebumps. "That's an amazing poem. Sheers' second collection, Skirrid Hill (£7.99), is just out from Welsh independent publisher, Seren. But for him "everything feels like it's got its root in poetry. Sheers himself may well be amazing, but he's definitely not weird. We're sitting in the Wet Fish Café in West Hampstead. Owen Sheers interview. AO 3 Contextual Influences. Seamus Heaney, Poet Laureate, RIP. GCE English LiteratureTeachers-Guide. WJEC's exclusive interview with poet, Owen Sheers. 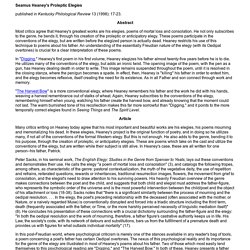 Abstract Most critics agree that Heaney's greatest works are his elegies, poems of mortal loss and consolation. He not only subscribes to the genre, he bends it, through his creation of the proleptic or anticipatory elegy. These poems participate in the conventions of the elegy, but are written before the elegized person is actually dead. In "Digging," Heaney's first poem in his first volume, Heaney elegizes his father almost twenty-five years before he is to die. "The Harvest Bow" is a more conventional elegy, where Heaney remembers his father and the work he did with his hands, weaving a harvest remembrance out of stalks of wheat.

Article Many critics writing on Heaney today agree that his most important and beautiful works are his elegies, his poems mourning and memorializing his dead. Key Themes in Field Work. The Flight of the Vernacular: Seamus Heaney, Derek Walcott and the Impress ..... 75, Seamus Heaney. Picture of the Irish poet and Nobel Prize winner Seamus Heaney at the University College Dublin, February 11, 2009. 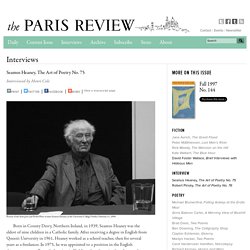 Born in County Derry, Northern Ireland, in 1939, Seamus Heaney was the eldest of nine children in a Catholic family. After receiving a degree in English from Queen's University in 1961, Heaney worked as a school teacher, then for several years as a freelancer. In 1975, he was appointed to a position in the English department at a college of education in Dublin, where he trained student teachers until 1981. Harvard University invited him for one term in 1979 and soon after, a part-time arrangement was proposed, allowing Heaney to teach the spring semester then return to Ireland and his family.

In 1984 he was elected the Boylston Professor of Rhetoric and Oratory at Harvard. Seamus Heaney and the legacy of Robert Lowell. Writing in 1821, with an assurance that seems barely credible in 1984, Shelley declared poets to be ''the unacknowledged legislators of the world.'' More than 100 years later, W. 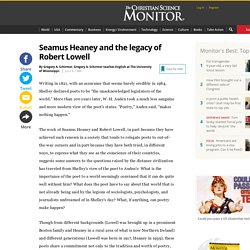 H. Auden took a much less sanguine and more modern view of the poet's status. Seamus Heaney, Poet of Contrary Progressions - Henry Hart. Henry Hart is the Mildred and J.B. 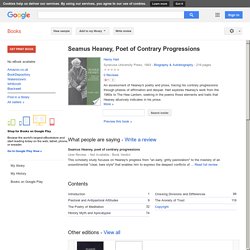 Hickman Professor of Humanities in the English Department at The College of William and Mary. He has published numerous critical books on modern poets, including THE POETRY OF GEOFFREY HILL (SIU Press, 1986), SEAMUS HEANEY: POET OF CONTRARY PROGRESSIONS (Syracuse UP, 1991), ROBERT LOWELL AND THE SUBLIME (Syracuse UP, 1995), and THE JAMES DICKEY READER (Touchstone, 1999). His biography, JAMES DICKEY: THE WORLD AS LIE (St. Martins, 2000), was runner-up for a Southern Book Critics' Circle Award. He has also published three books of poetry: THE GHOST SHIP (Blue Moon Books,1990), THE ROOSTER MASK (University of Illinois Press, 1998), and BACKGROUND RADIATION (Salt, 2007).