Adam Zagajewski. Adam Zagajewski was born in Lvov, Poland, in 1945; as an infant he was relocated with his family to western Poland. 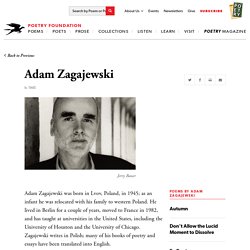 He lived in Berlin for a couple of years, moved to France in 1982, and has taught at universities in the United States, including the University of Houston and the University of Chicago. Zagajewski writes in Polish; many of his books of poetry and essays have been translated into English. Poemas de Uberto Stabile. Poetiza.me: Poesía callejera. 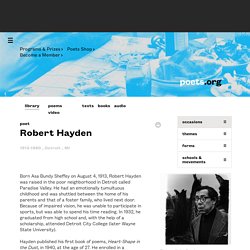 He had an emotionally tumultuous childhood and was shuttled between the home of his parents and that of a foster family, who lived next door. Because of impaired vision, he was unable to participate in sports, but was able to spend his time reading. In 1932, he graduated from high school and, with the help of a scholarship, attended Detroit City College (later Wayne State University). Hayden published his first book of poems, Heart-Shape in the Dust, in 1940, at the age of 27. Interview with Martin Malone, poet and editor. I’m pleased to be able to publish the first in a series of interviews with poets who are also editors. 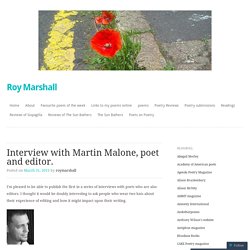 I thought it would be doubly interesting to ask people who wear two hats about their experience of editing and how it might impact upon their writing. Martin Malone is a UK based poet whose work has won prizes including the Wivenhoe Prize, the Straid Poetry Award and the Mirehouse Poetry Prize. His second collection, Cur, is due from Shoestring Press in October. Martin is currently undertaking practice-led research for a Ph.D in Poetry at Sheffield University and is editor of The Interpreter’s House poetry journal.

Dante. 5, Ezra Pound. Since his return to Italy, Ezra Pound has spent most of his time in the Tirol, staying at Castle Brunnenburg with his wife, his daughter Mary, his son-in-law Prince Boris de Rachewiltz, and his grandchildren. 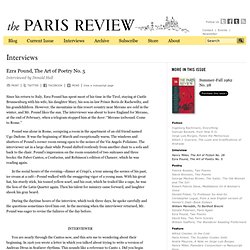 However, the mountains in this resort country near Merano are cold in the winter, and Mr. Pound likes the sun. The interviewer was about to leave England for Merano, at the end of February, when a telegram stopped him at the door: “Merano icebound. Come to Rome.” Pound was alone in Rome, occupying a room in the apartment of an old friend named Ugo Dadone. Dana Gioia. Seamus Heaney, Irish Poet of Soil and Strife, Dies. Poem of the week: Actaeon by George Szirtes. From Victorian times at least, women writers have been retelling classical myths and folktales from a woman-centred or feminist perspective. 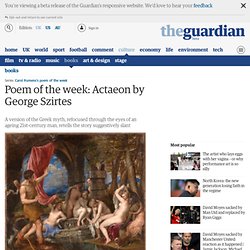 In this week's poem, "Actaeon" by George Szirtes, the myth is experienced intimately from the male perspective. The larger parables that emerge concern bodily limits and mortality. The hounds that run Actaeon into the ground may be those of time as well as desire. The epigraph draws attention to Donne's enthralled and enthralling "Elegy XX", (sometimes numbered XIX), "To His Mistress Going to Bed". Life Doesn't Frighten Me: Maya Angelou's Courageous Children's Verses, Illustrated by Basquiat. By Maria Popova A priceless primer on poetry and contemporary art for little ones, and a timeless reminder of the power of courage in all of us. 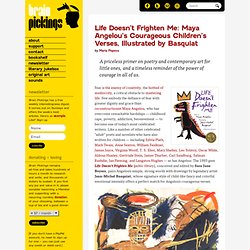 Fear is the enemy of creativity, the hotbed of mediocrity, a critical obstacle to mastering life. Poets.org. Poets.org - Poetry, Poems, Bios & More. River Profile by W.H. Auden. Our body is a moulded river —Novalis Out of a bellicose fore-time, thundering head-on collisions of cloud and rock in an up-thrust, crevasse-and-avalanche, troll country, deadly to breathers, it whelms into our picture below the melt-line, where tarns lie frore under frowning cirques, goat-bell, wind-breaker, fishing-rod, miner’s-lamp country, already at ease with the mien and gestures that become its kindness, in streams, still anonymous, still jumpable, flows as it should through any declining country in probing spirals. 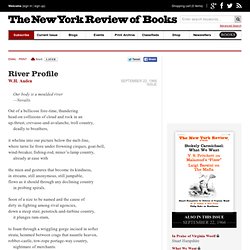 Soon of a size to be named and the cause of dirty in-fighting among rival agencies, down a steep stair, penstock-and-turbine country, it plunges ram-stam, Poetry 180 - How to Read a Poem Out Loud. 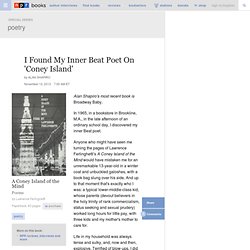 In 1965, in a bookstore in Brookline, M.A., in the late afternoon of an ordinary school day, I discovered my inner Beat poet. Anyone who might have seen me turning the pages of Lawrence Ferlinghetti's A Coney Island of the Mind would have mistaken me for an unremarkable 13-year-old in a winter coat and unbuckled galoshes, with a book bag slung over his side. And up to that moment that's exactly who I was: a typical lower-middle-class kid, whose parents (devout believers in the holy trinity of rank commercialism, status seeking and sexual prudery) worked long hours for little pay, with three kids and my mother's mother to care for. Life in my household was always tense and sulky, and, now and then, explosive. Hayden Carruth. Hayden Carruth was born in 1921, in Waterbury, Connecticut, and educated at both the University of North Carolina at Chapel Hill and the University of Chicago where he gained an MA.

After serving in the Second World War, he became editor of Poetry Magazine, one of America's most distinguished literary journals. In his early thirties, he suffered a breakdown - succumbing to the agoraphobia which continued to haunt him all his life. Allen Ginsberg - Howl. John Keats: Ode On A Grecian Urn. By John Keats Thou still unravished bride of quietness, Thou foster child of silence and slow time, Sylvan historian, who canst thus express A flowery tale more sweetly than our rhyme: What leaf-fringed legend haunts about thy shape Of deities or mortals, or of both, In Tempe or the dales of Arcady?

What men or gods are these? What maidens loath? What mad pursuit? What struggle to escape? Silliman's Blog. Charles LaPorte: Seeming Prey. Abbey in an Oak Forest, Caspar David Friedrich, 1810 by Charles LaPorte Victorian poetry is famous for documenting the emergence of key strains of secular modern thought, including those associated with natural science and modern biblical criticism. 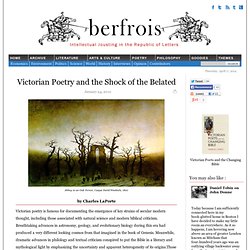 Breathtaking advances in astronomy, geology, and evolutionary biology during this era had produced a very different looking cosmos from that imagined in the book of Genesis. Yahia Lababidi: Every Tweet. Poetic Ideal: a language scrubbed clean by silences.If we listen, the air is heavy with poems, ripe for plucking.Branches are roots, too, in the sky.Perhaps it is not poetry that purifies the language of the tribe, but Silence.The true poet, or mystic, is not too proud to admit that, in matters great and small, they cannot proceed until they receive further instructions.One never becomes a poet, except when they are writing a poem. 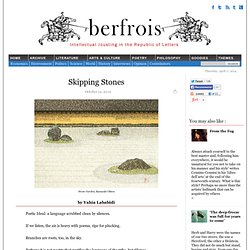 . *** Favorite Poem Project. Poetry Magazines - Poetry Review. About Poetry Review Poetry Review is the Poetry Society's internationally-acclaimed quarterly poetry magazine. Founded in 1912, it has published major names – such as Hardy, Auden and Ginsberg, Duffy, Heaney and Muldoon – alongside new and unpublished poets. With more than 100 pages of poetry, essays, reviews and comment, Poetry Review is the indispensible guide to contemporary poetry.

Members of the Poetry Society receive Poetry Review four times a year, with subscription-only options also available for non-members including schools, universities and libraries, as well as individuals. Shakespeare and the Number 14, or Why Poetry and Mathematics Belong Together. Podcast: Dan Chiasson on John Ashbery. Photograffiti in Paris—part 1 of 4 : Andrew Zawacki : Harriet the Blog. Open Door By Andrew Zawacki Who: Andrew ZawackiWhat: Paris graffitiWhen: June, 2012Where: Paris, France. Poetry and Utopia by Charles Simic. In 1972, I found myself on a panel whose subject was the poetry of the future. It was at the Struga Poetry Festival in Macedonia. I wasn’t scheduled to participate, but the American poet who was supposed to, W.S. The Bishop-Hemingway Connection by Thomas Travisano. A Rumi of One’s Own by Rachel Aviv.