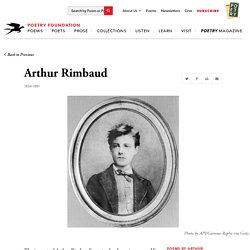 His influence on the Surrealist movement has been widely acknowledged, and a host of poets, from André Breton to André Freynaud, have recognized their indebtedness to Rimbaud’s vision and technique. He was the enfant terrible of French poetry in the second half of the 19th century and a major figure in symbolism. His works continue to be widely read and translated into numerous languages. English language poets including Samuel Beckett and John Ashbery have translated and been influenced by Rimbaud’s works.

Poetry & Writing. Moodle. A Brave and Startling Truth: Astrophysicist Janna Levin Reads Maya Angelou’s Stunning Humanist Poem That Flew to Space, Inspired by Carl Sagan. The second annual Universe in Verse — a charitable celebration of science through poetry, and a voice of resistance against the assault on nature — opened with the poem “A Brave and Startling Truth” by Maya Angelou (April 4, 1928–May 28, 2014), which flew to space on the Orion spacecraft and which Angelou dedicated to “the hope for peace, which lies, sometimes hidden, in every heart.” 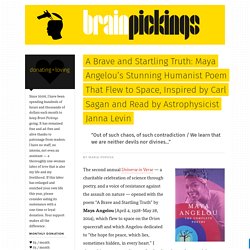 I chose this poem to set the tone for the show in part because it is absolutely stunning and acutely relevant to our cultural moment, and in part because the first time I read it, it sparked in me a sudden insight into the often invisible ways in which science and poetry influence and inspire one another — into how the golden threads of thought and feeling stretch and cross-hatch across disciplines to weave what we call culture.

Angelou composed the poem for the 50th anniversary of the United Nations in 1995. Harriet: The Slowdown. Wait: Galway Kinnell’s Beautiful and Life-Giving Poem for a Young Friend Contemplating Suicide. The Universe in Verse. April 23, 2019 The Universe in Verse — the annual celebration of science through poetry I host at Pioneer Works — returns with a very special edition: This year’s show, benefiting Pioneer Works’ endeavor to build New York’s first-ever public observatory, celebrates the 100th anniversary of Sir Arthur Eddington’s historic eclipse expedition to Africa, which confirmed relativity and catapulted Einstein into celebrity. 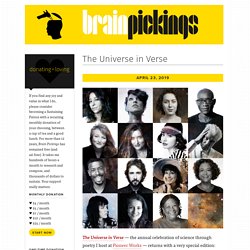 “Dear Mother, joyous news today,” Einstein wrote upon receiving word of the results, which revolutionized our understanding of the universe and shaped the course of modern physics. The scientific triumph was also a heartening, humane moment—just after the close of World War I, a pacifist English Quaker, who had refused to be drafted in the war at the risk of being jailed for treason, and a German Jew united humanity under the same sky, under the deepest truths of the universe.

An invitation to perspective in the largest sense. Rufus Wainwright - Sonnet 29 - Shakespeare. U2 - Get On Your Boots Lyrics. Examples of Braille Poetry. To Understand Complicated Concepts, Read These Haikus. Writing for Quartz, Jane C. 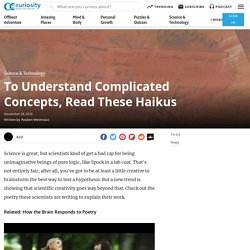 Hu made the good point that while searching #sciencehaiku is a great way to spend an afternoon, the technique of turning your expertise into a poem is good for more than just science. Really, any complicated topic could stand an aesthetically pleasing distillation. Take your own area of expertise and start jotting down ideas that get to the heart of what you like about it. We British - The People's Shipping Forecast - BBC Sounds. Qualia and other wildlife: 'language' poetry & the shipping forecast. I've belonged to a rigorously intellectual poetry discussion group for more than twenty years now (this is not the group of poets I tutor under the name of Two Rivers, in my posting about our anthology Confluence). 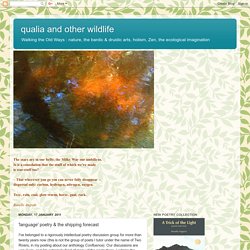 Our discussions are very lively, and I'm extremely fond of many of the poets there. I admire the poetry of two or three of them in particular, and I really enjoy the breadth and depth of our discussions. A Brave and Startling Truth: Astrophysicist Janna Levin Reads Maya Angelou’s Stunning Humanist Poem That Flew to Space, Inspired by Carl Sagan. 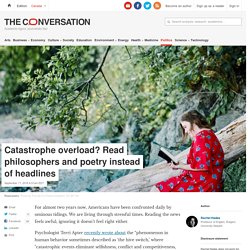 We are living through stressful times. Reading the news feels awful; ignoring it doesn’t feel right either. Psychologist Terri Apter recently wrote about the “phenomenon in human behavior sometimes described as ‘the hive switch,’ where "catastrophic events eliminate selfishness, conflict and competitiveness, rendering humans as co-operative as ultra-social bees.”

London Design Festival. CZARFACE & MF DOOM – Captain Crunch Lyrics. BBC Radio 4 - Shipping Forecast - Available now. In these shoes i don't think so lyrics. I once met a man with a sense of adventureHe was dressed to thrill wherever he wentHe said: Let's make love on a mountain topUnder the stars on a big hard rockI said: In these shoes? 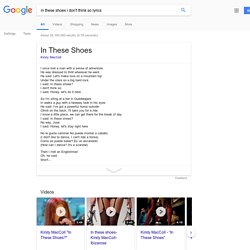 I don't think soI said: Honey, let's do it here So I'm siting at a bar in GuadalajaraIn walks a guy with a faraway look in his eyesHe said: I've got a powerful horse outsideClimb on the back, I'll take you for a rideI know a little place, we can get there for the break of dayI said: In these shoes? No way, JoseI said: Honey, let's stay right here No le gusta caminar No puede montar a caballo(I don't like to dance, I can't ride a horse)Como se puede bailar? Es un escandolo(How can I dance? Then I met an EnglishmanOh, he saidWon't… Then I met an EnglishmanOh, he saidWon't you walk up and down my spineIt makes me feel strangely aliveI said: In these shoes? This is the Place: how a poem gave voice to Manchester's grief. In the midst of the pain, the capacity of poetry to connect with people was illustrated by Tony Walsh. 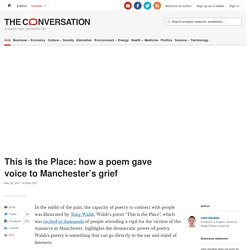 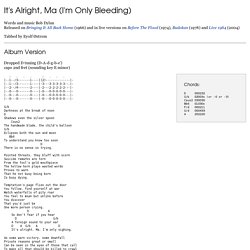 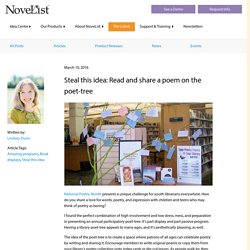 BBC Radio 4 - The Manchester Ballads. BBC Radio 4 - Natural Histories, Natural Histories Live - The Big Story, Whale Nation By Heathcote Williams. Gil scott-heron poems, gil scott-heron poetry, The Revolution Will Not Be Televised gil scott-heron - Welcome to Famous Black American Poet Gil Scott-Heron PoetsPage... Collection of poems written by Black American Born Poet Gil Scott-Heron can be found h. April 1, 1949, Chicago, Illinois, USA. Raised in Jackson, Tennessee, by his grandmother, Scott-Heron moved to New York at the age of 13. His estranged father played for Glasgow Celtic, a Scottish soccer team. Astonishingly precocious, Scott-Heron had published two novels (The Vulture and The Nigger Factory) plus a book of poems (Small Talk At 125th And Lenox) by 1972. He met musician Brian Jackson when both were students at Lincoln University, Pennsylvania, and in 1970 they formed the Midnight Band to play their original blend of jazz, soul and prototype rap music.

Small Talk At 125th And Lenox was mostly an album of poems (from his book of the same name), but later albums showed Scott-Heron developing into a skilled songwriter whose work was soon covered by other artists: for example, LaBelle recorded his 'The Revolution Will Not Be Televised' and Esther Phillips made a gripping version of 'Home Is Where The Hatred Is'. As of today Mr. Murray Lachlan Young. "The Revenant" by Billy Collins. TEDxEast - Sarah Kay-Poetess/Storyteller. The official website for poet Sarah Kay. "We Real Cool" Gwendolyn Brooks 1959 poem LISTEN TO THE POET HERSELF! Gwendolyn Brooks reads We Real Cool. BBC Radio 4 - The Echo Chamber, Series 5, Tony Harrison.

What Are Blackout Poems? If— by Rudyard Kipling. Shatoetry. The New Colossus. A Brief Guide to the Beat Poets. I saw the best minds of my generation destroyed by madness, starving hysterical naked,dragging themselves through the negro streets at dawn looking for an angry fix,angelheaded hipsters burning for the ancient heavenly connection to the starry dynamo in the machinery of night . . . —Allen Ginsberg, “Howl” Beat poetry evolved during the 1940s in both New York City and on the west coast, although San Francisco became the heart of the movement in the early 1950s. The end of World War II left poets like Allen Ginsberg, Gary Snyder, Lawrence Ferlinghetti and Gregory Corso questioning mainstream politics and culture. These poets would become known as the Beat generation, a group of writers interested in changing consciousness and defying conventional writing.

The Beats were also closely intertwined with poets of the San Francisco Renaissance movement, such as Kenneth Rexroth and Robert Duncan. Song of Myself (1892 version) by Walt Whitman. I celebrate myself, and sing myself, And what I assume you shall assume, For every atom belonging to me as good belongs to you. I loafe and invite my soul, Preserving the fine literature created by the world’s spammers. Roundhouse Poetry Collective.

We do NOT keep any eBooks in compliance with a particular paper edition. Copyright laws are changing all over the world. Be sure to check the copyright laws for your country before downloading or redistributing this file. James Joyce - Chamber Music. P.C. EVERYTHING EVERYTHING LYRICS - Duet. Do you feel left behind? Kate Tempest. Preserving the fine literature created by the world’s spammers. I carry your heart with me by E. E. Cummings Classic Famous Poet. Liza Paizis ~ Inspirational Fantasy Art, Design & Illustration. A Persian Poem. Wilfred Owen War Poems. Java! (Computer Generated Poetry) Shakespeare's Sonnets. Arts - Poetry.