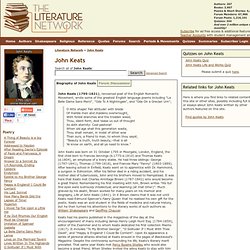 Fair attitude! With bredeOf marble men and maidens overwrought,With forest branches and the trodden weed;Thou, silent form, dost tease us out of thoughtAs doth eternity: Cold pastoral! When old age shall this generation waste,Thou shalt remain, in midst of other woeThan ours, a friend to man, to whom thou sayst,"Beauty is truth, truth beauty,--that is allYe know on earth, and all ye need to know. " John Keats was born on 31 October 1795 in Moorgate, London, England, the first child born to Frances Jennings (b.1775-d.1810) and Thomas Keats (d.1804), an employee of a livery stable.

Ode on a Grecian Urn by John Keats. On First Looking into Chapman's Homer by John Keats. Much have I travell'd in the realms of gold, And many goodly states and kingdoms seen; Round many western islands have I been Which bards in fealty to Apollo hold. 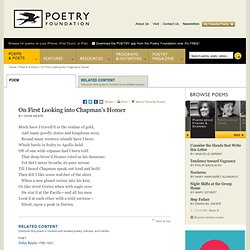 Oft of one wide expanse had I been told That deep-brow'd Homer ruled as his demesne; Yet did I never breathe its pure serene Till I heard Chapman speak out loud and bold: Then felt I like some watcher of the skies When a new planet swims into his ken; Or like stout Cortez when with eagle eyes He star'd at the Pacific—and all his men. Ode to a Nightingale by John Keats. The Raven by Edgar Allan Poe. Stopping by Woods on a Snowy Evening by Robert Frost. Whose woods these are I think I know. 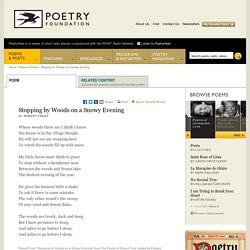 His house is in the village though; He will not see me stopping here To watch his woods fill up with snow. My little horse must think it queer To stop without a farmhouse near Between the woods and frozen lake The darkest evening of the year. He gives his harness bells a shake To ask if there is some mistake. The only other sound’s the sweep Of easy wind and downy flake. 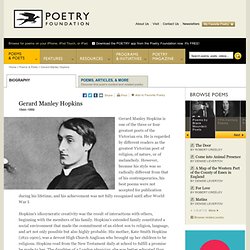 He is regarded by different readers as the greatest Victorian poet of religion, of nature, or of melancholy. However, because his style was so radically different from that of his contemporaries, his best poems were not accepted for publication during his lifetime, and his achievement was not fully recognized until after World War I. Hopkins's idiosyncratic creativity was the result of interactions with others, beginning with the members of his family. Hopkins's extended family constituted a social environment that made the commitment of an eldest son to religion, language, and art not only possible but also highly probable. His mother, Kate Smith Hopkins (1821-1900), was a devout High Church Anglican who brought up her children to be religious. 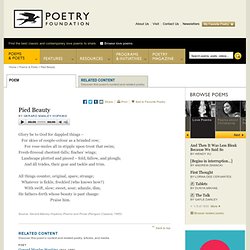 The Windhover by Gerard Manley Hopkins : Poem Guide : Learning Lab. I fell in love with “The Windhover” when I was a teenager, recognizing right away the rapture of a love poem directed not at a particular person (though the poem is dedicated “To Christ our Lord”) but to life itself. 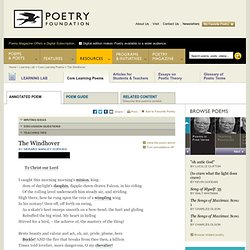 The poem is widely anthologized, a cornerstone of the English canon, bridging the Victorian Age and early 20th century Modernism. Its author, Gerard Manley Hopkins, was a Jesuit priest who died at the age of 44. He had felt the tension between his religious and literary callings throughout his career, first burning all his work upon entering the priesthood, then taking up verses again only for church occasions, then writing a masterpiece in earnest, “The Wreck of the Deutschland,” to elegize a handful of nuns who fled persecution in Germany only to drown in the high seas. Spring and Fall by Gerard Manley Hopkins. To a young child. 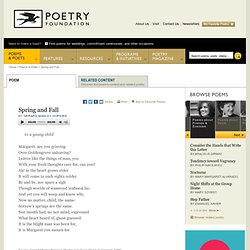 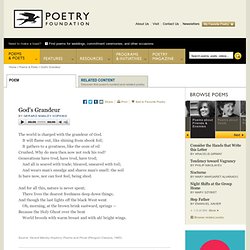 It will flame out, like shining from shook foil; It gathers to a greatness, like the ooze of oil Crushed. Why do men then now not reck his rod? Ars Poetica by Archibald MacLeish.