Annotations - The Rime of the Ancient Mariner. Inventory: 26 Songs that are just as good as short stories · Inventory. Love Song by William Carlos Williams. I lie here thinking of you:— 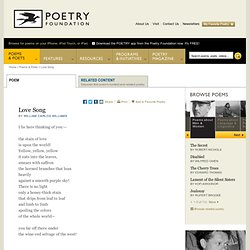 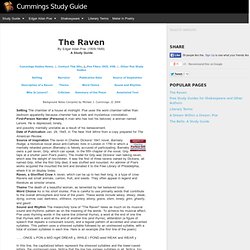 Cummings..© 2004 . Setting The chamber of a house at midnight. Poe uses the word chamber rather than bedroom apparently because chamber has a dark and mysterious connotation. Source of Inspiration The raven in Charles Dickens' 1841 novel, Barnaby Rudge, a historical novel about anti-Catholic riots in London in 1780 in which a mentally retarded person (Barnaby) is falsely accused of participating. .......ONCE u PON a MID night DREAR y, WHILE i POND ered WEAK and WEAR y. The Interactive Raven. Pondered: mulled over, contemplated quaint: odd, singular, old-fashioned lore: traditional knowledge dreary: dull, tiresome Alliteration:Repeated consonant sounds Internal Rhyme:Rhyme within the line. 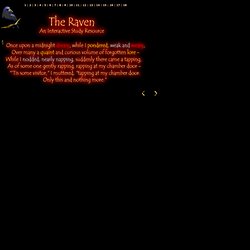 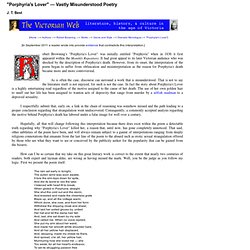 It had great appeal to its later Victorian audience who was shocked by the description of Porphyria's death. However, from its onset, the interpretation of the poem began to suffer from obfuscation and misinterpretation as the reason for Porphyria's death became more and more controversial. As is often the case, discourse can surround a work that is misunderstood. That is not to say the literature itself is not enjoyed, for such is not the case.

I respectfully submit that, early on, a link in the chain of reasoning was somehow missed and the path leading to a proper conclusion regarding that strangulation went undiscovered. The Sick Rose Symbolism, Imagery, & Allegory. MLA Style Works Cited: Shmoop Editorial Team. 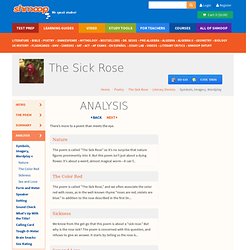 King James VersionToday's New International Version 1The vision of Isaiah the son of Amoz, which he saw concerning Judah and Jerusalem in the days of Uzziah, Jotham, Ahaz, and Hezekiah, kings of Judah. 2Hear, O heavens, and give ear, O earth: for the LORD hath spoken, I have nourished and brought up children, and they have rebelled against me. 3The ox knoweth his owner, and the ass his master's crib: but Israel doth not know, my people doth not consider. 4Ah sinful nation, a people laden with iniquity, a seed of evildoers, children that are corrupters: they have forsaken the LORD, they have provoked the Holy One of Israel unto anger, they are gone away backward. 5Why should ye be stricken any more? 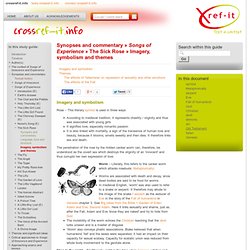 GCSE poetry, my last duchess - poem by robert browning. Robert Browning was a 19th-century British poet whose reputation and popularity has grown since his work was first published in the Victorian era. 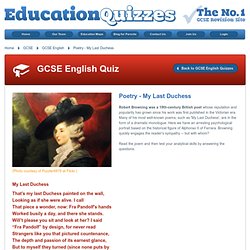 Many of his most well-known poems, such as 'My Last Duchess', are in the form of a dramatic monologue. Here we have an arresting psychological portrait based on the historical figure of Alphonso II of Ferrara. Browning quickly engages the reader's sympathy -- but with whom? Read the poem and then test your analytical skills by answering the questions. My Last Duchess That’s my last Duchess painted on the wall, Looking as if she were alive. Robert Browning. How to Understand a Poem: 8 Steps. How to Read a Poem. Reproduced in partnership with the Great Books Foundation.

Reading poetry well is part attitude and part technique. Curiosity is a useful attitude, especially when it’s free of preconceived ideas about what poetry is or should be. Effective technique directs your curiosity into asking questions, drawing you into a conversation with the poem. In Great Books programs, the goal of careful reading is often to take up a question of meaning, an interpretive question that has more than one answer. Literary Analysis Papers: How to read a poem. Use the guidelines below to learn how to read a poem and understand it. 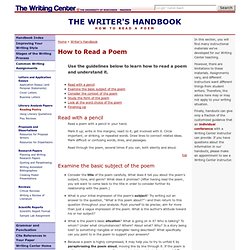 Read with a pencil Read a poem with a pencil in your hand. Mark it up; write in the margins; react to it; get involved with it. Circle important, or striking, or repeated words. Draw lines to connect related ideas. Read through the poem, several times if you can, both silently and aloud. top.