Essays and Articles on Poetry

Rapping, deconstructed: The best rhymers of all time. Inside the Mind of Poetry. One must have a mind of winter. 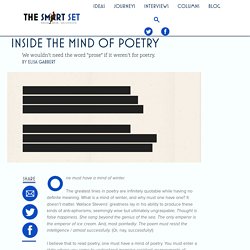 The greatest lines in poetry are infinitely quotable while having no definite meaning. What is a mind of winter, and why must one have one? It doesn’t matter. Wallace Stevens’ greatness lay in his ability to produce these kinds of anti-aphorisms, seemingly wise but ultimately ungraspable: Thought is false happiness. She sang beyond the genius of the sea. I believe that to read poetry, one must have a mind of poetry. Is this “negative capability”? Negative capability, as described by Keats, is rather delightfully poetic in itself, a form of imitative fallacy in criticism, a mental onomatopoeia.

There are probably people who go through life with a permanent mind of poetry. But I don’t want to read it. Actually, let’s follow this metaphor. So let’s talk about the difference between poetry and prose: a difference so often belabored but rarely to much satisfaction. 20 Poets on the Meaning of Poetry. We’ve been thinking about poet Meena Alexander’s incredible address to the Yale Political Union, in which she refers to Shelley’s 1821 essay, A Defence of Poetry. 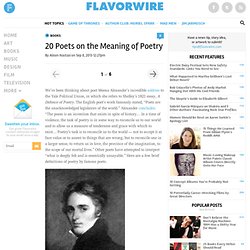 The English poet’s work famously stated, “Poets are the unacknowledged legislators of the world.” Alexander concludes: “The poem is an invention that exists in spite of history… In a time of violence, the task of poetry is in some way to reconcile us to our world and to allow us a measure of tenderness and grace with which to exist… Poetry’s task is to reconcile us to the world — not to accept it at face value or to assent to things that are wrong, but to reconcile one in a larger sense, to return us in love, the province of the imagination, to the scope of our mortal lives.” Other poets have attempted to interpret “what is deeply felt and is essentially unsayable.”

Her brother died in a car accident when she was 12 years old and the emotional impact lingered in the family for years. By the time Gooden had reached her junior year in high school, her world came crashing down. After a falling out with her mother, she moved in with a friend and her family in poverty-stricken North Philly. She started cutting class, and went from her high school's honor roll to failing. Michael Scammell: Pride And Poetry.

Joseph Brodsky: A Literary Life By Lev Loseff Translated by Jane Ann Miller (Yale University Press, 333 pp., $22) Joseph Brodsky caught the attention of the outside world for the first time in 1964, when he was tried in Leningrad for the crime of writing poetry. 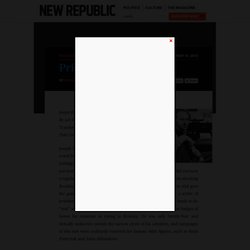 That is not how the indictment read, of course: his “crime” was that he did not have a regular job, and was therefore a “parasite.” But a scurrilous article attacking Brodsky in the Evening Leningrad newspaper not long before his trial gave the game away. He was charged with being a “literary drone,” a writer of pointless doggerel, and therefore useless to society unless he was made to do “real” work. The newspaper attack and the subsequent trial were badges of honor for someone as young as Brodsky. The Prose Poem. On "In a Station of the Metro" "In a Station of the Metro" by Ezra Pound The apparition of these faces in the crowd; Petals on a wet, black bough. 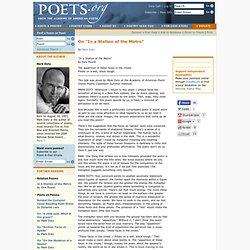 This talk was given by Mark Doty at the Academy of American Poets' Online Poetry Classroom Summer Institute. MARK DOTY: Whenever I return to this poem I always have the sensation of being in a New York subway, the car doors opening, and suddenly there's a scene framed by the doors. Then, snap, they close again. Similarly, this poem speeds by us, a flash, a moment of perception is all we have. And because this is such a profoundly compressed poem it would serve us well to pay close attention to what happens to us as we read it. There's the suggestion that the faces as "petals" were once conjoined. MAN: One thing that strikes me is how intensely grounded the poem is and how much work the title does. The metaphor stays with you because the ground has been laid by that initial abstraction: "apparition. " "These faces in the crowd. / Petals on a wet, black bough. " MAN: Sadness.