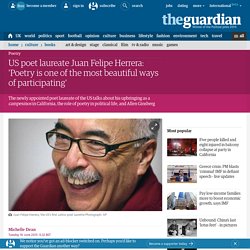 But he would rather not stop there: “The more we engage in society, the more firsts we have, then there will be a moment when we have no more firsts.” He thinks about that statement for a second, then adds, “Or maybe there will always be new firsts.” Few people in America would speak of poetry as a realm of endless possibility in the way Herrera does, not anymore. For many people, poetry is still stereotyped as the inaccessible, ivory-tower stuff studied by academics and force-fed on high-school students or to be found in Father’s Day cards.

Even the size of the stipend Herrera will collect as poet laureate – $35,000 – indicates a certain amount of public disinterest in this particular art. But it was never that way for Herrera. In Translation: June Fiction and Poetry. It’s that time again: time to bring you a selection of some of the best translated fiction coming out this month! 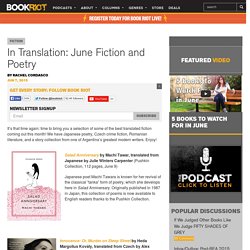 We have Japanese poetry, Czech crime fiction, Romanian literature, and a story collection from one of Argentina’s greatest modern writers. Enjoy! Salad Anniversary by Machi Tawar, translated from Japanese by Julie Winters Carpenter (Pushkin Collection, 112 pages, June 9) Japanese poet Machi Tawara is known for her revival of the classical “tanka” form of poetry, which she develops here in Salad Anniversary. Originally published in 1987 in Japan, this collection of poems is now available to English readers thanks to the Pushkin Collection. Innocence: Or, Murder on Steep Street by Heda Margolius Kovály, translated from Czech by Alex Zucker (Soho Crime, 256 pages, June 2) From this acclaimed Holocaust memoirist (Under a Cruel Star) comes a rediscovered work of semi-autobiographical crime fiction.

Get ready to have your brain bent six different ways. 10 Fantastic Fog Words. In the summer months, we here in the San Francisco Bay Area encounter a lot of fog. 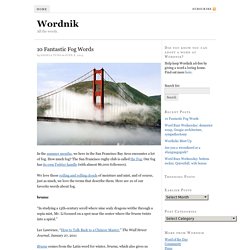 How much fog? The San Francisco rugby club is called the Fog. Our fog has its own Twitter handle (with almost 86,000 followers). We love those roiling and rolling clouds of moisture and mist, and of course, just as much, we love the terms that describe them. Here are 10 of our favorite words about fog. brume “In studying a 13th-century scroll where nine scaly dragons writhe through a sepia mist, Mr. Aneuendorf : The final section of Shelley's... The Blue Address Book by Jane Shore. Share Like the other useless things I can't bear to get rid of — her nylon nightgowns, his gold-plated. 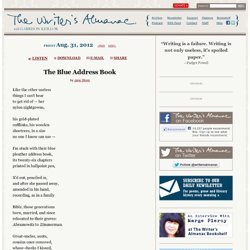 Day of Grief. The Fetch by Ciarán Carson. This Longing by Martin Steingesser. Share ... awoke to rain around 2:30 this morning thinking of you, because I'd said only a few days before, this is what I wanted, to lie with you in the dark listening how rain sounds. 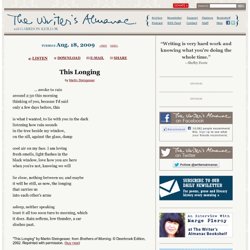 Celebrating Childhood by Adonis. A Prayer for My Daughter by William Butler Yeats. Sublunary by A.E. Stallings. Patriotism by Ellie Schoenfeld. Share My country is this dirt that gathers under my fingernails. 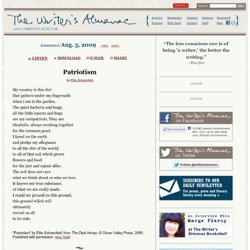 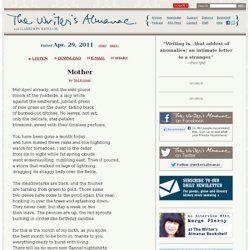 Digging by Seamus Heaney. Woman Feeding Chickens by Roy Scheele. Share Her hand is at the feedbag at her waist, sunk to the wrist in the rustling grain that nuzzles her fingertips when laced around a sifting handful. In Texas by May Sarton. Share In Texas the lid blew off the sky a long time ago So there's nothing to keep the wind from blowing And it blows all the time. 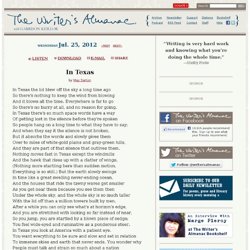 Everywhere is far to go So there's no hurry at all, and no reason for going. In Texas there's so much space words have a way Of getting lost in the silence before they're spoken. Sea Fever. The Bean House. The Lake Isle of Innisfree by William Butler Yeats. I will arise and go now, and go to Innisfree, And a small cabin build there, of clay and wattles made; Nine bean-rows will I have there, a hive for the honey-bee, And live alone in the bee-loud glade. 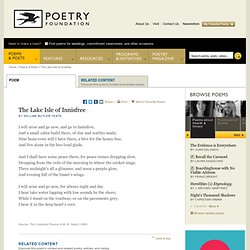 A famous poet explains how great verse can help solve big social problems (and reads you a poem!) Award-winning poet Jane Hirshfield (Photo by Michael Lionstar) Jane Hirshfield, the award-winning poet, translator and essayist, has lofty ideas about poetry’s role in human lives, which she sets out in her new book about poetry, “Ten Windows: How Great Poems Transform the World.” 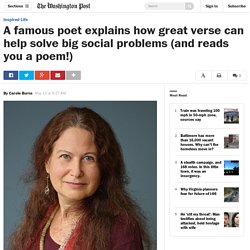 On the same day, she released her new book of poems, “The Beauty.” She spoke from her home in the San Francisco area. Q. Your book has a very heady subtitle: Can you explain how poems transform the world? I think we know the world needs changing. Stephen Burt: Why people need poetry.