Emma Jones: the genuine article. Poetry Reading: Capturing a Sense of Motion. Some poems have more motion than others. 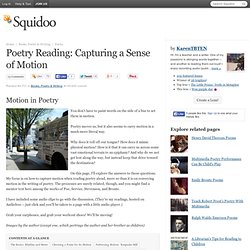 Part of the reader’s task is finding those poems! I read prose for a podcast and poems for a Blog Talk Radio show. For the latter, I get to choose my material. So most weeks, I sift through poems and look for something that draws its emotion from the auditory. I often favor poems with rhythm and rhyme over free verse. In my eyes (or should I say ears?)

The connection between rhythm and motion is perhaps the easiest to understand. Repetition, be it a repeated pattern or rhyme scheme or a series of lines with a parallel structure, can also carry motion. Representative Poetry Online. Acatalectic see Catalectic Accent (Latin, ‘song added to speech’) A stressed syllable or ictus. 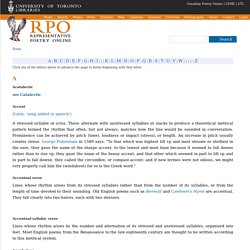 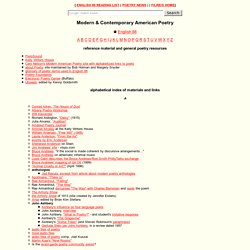 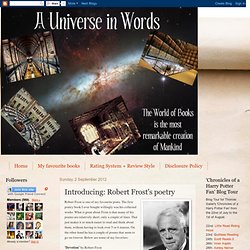 The first poetry book I ever bought willingly was his collected works. What is great about Frost is that many of his poems are relatively short, only a couple of lines. That just makes it so much easier to read and think about them, without having to look over 5 or 6 stanzas. On the other hand he has a couple of poems that seem to go on forever. Poetry: Good Fences. Robert Frost. Robert Frost holds a unique and almost isolated position in American letters. 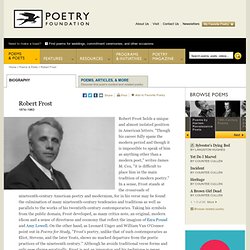 "Though his career fully spans the modern period and though it is impossible to speak of him as anything other than a modern poet," writes James M. Cox, "it is difficult to place him in the main tradition of modern poetry. " In a sense, Frost stands at the crossroads of nineteenth-century American poetry and modernism, for in his verse may be found the culmination of many nineteenth-century tendencies and traditions as well as parallels to the works of his twentieth-century contemporaries. 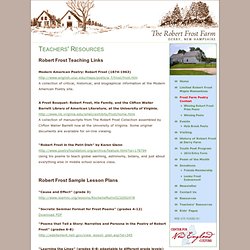 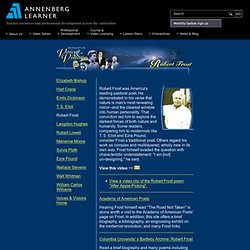 He demonstrated in his verse that nature is man's most revealing mirror--and the clearest window into human personality. That conviction led him to explore the darkest forces of both nature and humanity. Some readers, comparing him to modernists like T. Voices & Visions. 1. 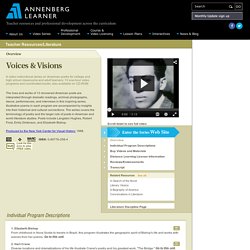 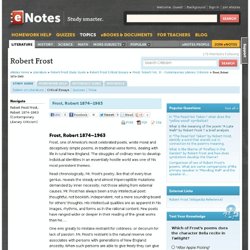 The struggles of ordinary men to develop individual identities in an essentially hostile world was one of his most persistent themes. Read chronologically, Mr. Frost's poetry, like that of every true genius, reveals the steady and almost imperceptible mutations demanded by inner necessity, not those arising from external causes. Robert Frost: Lovers' Quarrel With the World (clip) Robert Frost Prompts the Poet in You. Lesson Plan Preview In this lesson, students write poems similar in form and style to one of three poems by Robert Frost. 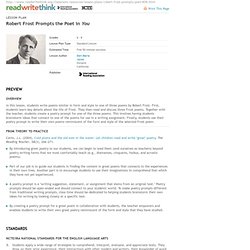 First, students learn key details about the life of Frost. They then read and discuss three Frost poems. Together with the teacher, students create a poetry prompt for one of the three poems. Back to top Certo, J.L. (2004). By introducing great poetry to our students, we can begin to lead them (and ourselves as teachers) beyond poetry writing forms that we most comfortably teach (e.g., diamantes, cinquains, haikus, and acrostic poems).Part of our job is to guide our students in finding the content in great poems that connects to the experiences in their own lives. Standards. Robert Frost Recites ‘Stopping by Woods on a Snowy Evening’ Robert Frost - A Guide for Teachers. A Guide for Teachers with selected web resources and reading questions for five poems.

Author Study: Robert Frost and Modern American Poets. Global rating average: {{value}} out of {{max}} 0.0 0.0 0.0 0.0 0.0 These resources are about the poet Robert Frost and his contemporaries. You will find biographical information, full-text poems, audio files, images, and lesson plans. Included are sites about other modern American poets such as Carl Sandburg, T. S. Eliot, Ezra Pound, and William Carlos Williams. Grades Links. What Inspired The Road Not Taken. After Apple-Picking: Lines 1-8 Summary. Lines 1-2 My long two-pointed ladder's sticking through a treeToward heaven still, First of all, how long "after apple-picking" is this poem set?

It's not a simple question, and you might want to re-read the whole poem a couple times before you try to answer it. Go ahead, we'll wait. Robert Frost: Clarity through Form and Suspension. A Special Series on Robert Frost by Samantha Lê (part 1 of 6) In contrast to the experimental aesthetics of his modernist contemporaries Ezra Pound and T.S. Eliot, Robert Frost’s traditional approach to poetry produced works that are both conversational and accessible to the masses.

Robert Frost's "Mending Wall": A Marriage of Poetic Form and Content. Activity 1. Reading Frost Aloud To enhance the poem visually, first show students pictures of the actual stone wall about which Frost writes in "Mending Wall. " The pictures of Frost's farmhouse in Derry, NH, are available at the Frost Exhibit at the EDSITEment-reviewed Modern American Poetry website from the University of Illinois, Urbana-Champaign.