What makes a poem … a poem? - Melissa Kovacs. The first poems were read aloud. 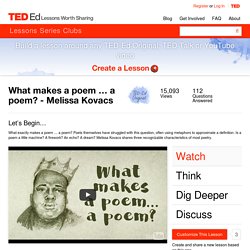 Their regular patterns aided memorization of genealogy, oral history, and law. The performance aspect of poetry has never disappeared; Robert Frost toured the country and earned a living mainly through poetry readings. In 2012, there were 7,427 poetry readings in April, National Poetry Month. Some would even say poetry is meant to be read aloud. The poetic tradition can relate to orators, who craft messages to be delivered aloud to an audience. Today, performance poetry has become a genre unto itself, most notably, in the rise of slam poetry in the 1980’s.

The lesson begins with a poem delivered by Muhammad Ali. Free verse poetry defied many of the conventions of traditional poetry when a movement began to “free” poetry from strict form standards and instead mimic the patterns and rhythms of everyday speech. Writing with Writers. Scholastic. WordMover.

Poetry Foundation. Often used in political speeches and occasionally in prose and poetry, anaphora is the repetition of a word or words at the beginning of successive phrases, clauses, or lines to create a sonic effect. 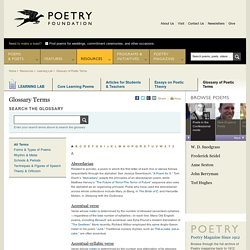 Dr. Martin Luther King Jr.’s famous “I Have a Dream” speech, which uses anaphora not only in its oft-quoted “I have a dream” refrain but throughout, as in this passage when he repeats the phrase “go back to”: Go back to Mississippi, go back to Alabama, go back to South Carolina, go back to Georgia, go back to Louisiana, go back to the slums and ghettos of our northern cities, knowing that somehow this situation can and will be changed. In Joanna Klink's poem “Some Feel Rain,” the phrase "some feel" is repeated, which creates a rhythm and a sense of an accumulating emotions and meanings: Some feel rain. In its ghost-part when the bark slips. 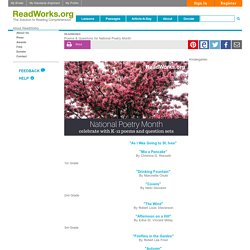 Print Kindergarten "As I Was Going to St. "Mix a Pancake" By Christina G. 1st Grade "Drinking Fountain" By Marchette Chute "Covers" By Nikki Giovanni 2nd Grade "The Wind" By Robert Louis Stevenson "Afternoon on a Hill" By Edna St. 3rd Grade "Fireflies in the Garden" By Robert Lee Frost. I, Too, Sing America. Patriotism's a pretty complicated concept. 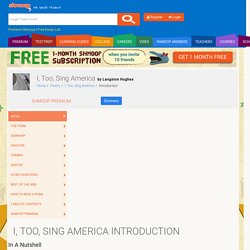 It can mean standing up for your country or criticizing it. If you want to sum up patriotism, you can simply call it "love for one's country. " But how does one love a country? Unconditionally? Langston Hughes certainly doesn't think so. Hughes was often considered the poet laureate of the Harlem Renaissance. Hughes published "I, Too, Sing America" in 1945, a good ten years or so before the start of the Civil Rights Movement in the United States. We started this party talking about patriotism. Patriotism's all about loving your country and being proud to be its citizen, right? In Langston Hughes's case, he knows that by birth he's an American citizen. So Hughes pens this poem, in which he envisions a greater America, a more inclusive America.

Freedom and equality. 24 Must-Share Poems for Middle School and High School. It can be hard to know which poems will spur your middle and high schoolers into deep, meaningful discussion and which will leave them, ahem, yawning. 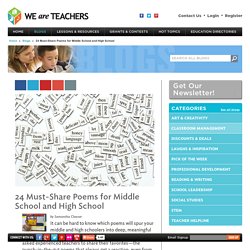 So we asked experienced teachers to share their favorites—the punch-in-the-gut poems that always get a reaction, even from teens. Here's what they had to say. 1. Snow by David Berman Captures a narrative in miniature with a creative structure. PoemHunter.com: Poems - Quotes - Poetry. Best Teen Poems - Poems about Teens. Classroom-Friendly Poems.