The National Bureau of Economic Research 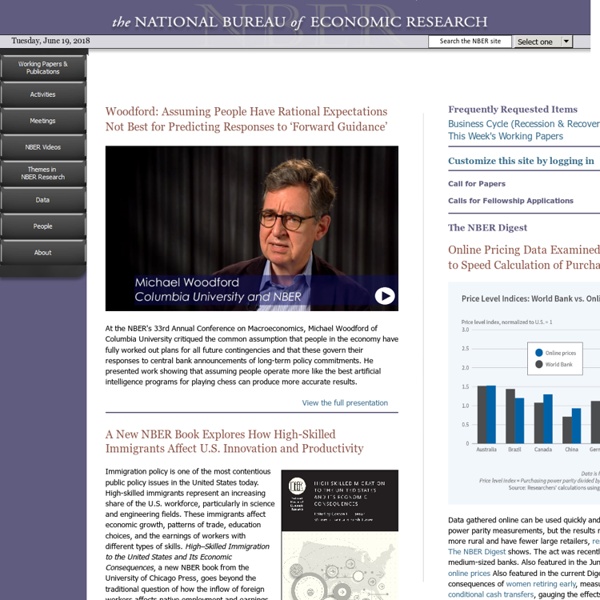 Easy Chart Builder plugin for WordPress Easy Chart Builder makes it easy to incorporate sophisticated review charts and graphs directly within a post, page, and even a widget. Hey, its free. Try it out. The Aftermath of Financial Crises NBER Working Paper No. 14656Issued in January 2009NBER Program(s):International Finance and Macroeconomics This paper examines the depth and duration of the slump that invariably follows severe financial crises, which tend to be protracted affairs. We find that asset market collapses are deep and prolonged. Mundell–Fleming model The Mundell–Fleming model, also known as the IS-LM-BoP model, is an economic model first set forth (independently) by Robert Mundell and Marcus Fleming.[1][2] The model is an extension of the IS-LM Model. Whereas the traditional IS-LM Model deals with economy under autarky (or a closed economy), the Mundell–Fleming model describes an open economy. The Mundell–Fleming model portrays the short-run relationship between an economy's nominal exchange rate, interest rate, and output (in contrast to the closed-economy IS-LM model, which focuses only on the relationship between the interest rate and output). The Mundell–Fleming model has been used to argue that an economy cannot simultaneously maintain a fixed exchange rate, free capital movement, and an independent monetary policy. This principle is frequently called the "impossible trinity," "unholy trinity," "irreconcilable trinity," "inconsistent trinity" or the "Mundell–Fleming trilemma." Basic set up[edit]

High to Low Dividend % High to Low Dividend Yield Note that these rankings are purely a result of combining existing data and should not be taken to be an endorsement or recommendation to buy or sell. This table shows all of the companies listed on the NZX in order of high to low Dividend Yield %. Deflation In economics, deflation is a decrease in the general price level of goods and services.[1] Deflation occurs when the inflation rate falls below 0% (a negative inflation rate). This should not be confused with disinflation, a slow-down in the inflation rate (i.e., when inflation declines to lower levels).[2] Inflation reduces the real value of money over time; conversely, deflation increases the real value of money – the currency of a national or regional economy. This allows one to buy more goods with the same amount of money over time. Causes and corresponding types[edit]

Is Silver Undervalued? 3 Reasons it Could Be The silver price has dropped drastically over the last five years, but is silver undervalued? Here are three reasons it could be. The silver price has dropped significantly over the past five years, falling from around $35 per ounce in 2012 to just over $16 today. IS/LM model The IS curve moves to the right, causing higher interest rates (i) and expansion in the "real" economy (real GDP, or Y). The model was developed by John Hicks in 1937,[4] and later extended by Alvin Hansen,[5] as a mathematical representation of Keynesian macroeconomic theory. Between the 1940s and mid-1970s, it was the leading framework of macroeconomic analysis.[6] While it has been largely absent from macroeconomic research ever since, it is still the backbone of many introductory macroeconomics textbooks.[7] History[edit]

The 2 Main Ideas From "The Little Book That Beats the Market" The Little Book That Beats the Market is a classic book on investing in the stock market. Author Joel Greenblatt gives an innovative method for choosing stocks. It’s pretty impressive, honestly. Here are his main ideas, and the “magical formula” he uses. He actually refers to it as “the magic formula,” and it just may be.

Caucus Night Colorado Tonight is Caucus night in Colorado. Thousands of political junkies and activists will turn out to elect delegates to represent candidates at the party state assemblies in May. Key races to watch include the Democratic and Republican U.S.

The Secret Ingredient for Higher Stock Prices Basic Wall Street Lingo The bulls want the market (or a stock) to go higher, and the bears want the market (or a stock) to go lower. Typically, the bulls go "long," and the bears go "short" in order to express their view. The most common way of measuring the bearish side is to look at short interest. What Is Short Interest? Short interest is the percentage of shares sold short versus the number of shares outstanding.