10 Profound Ways The World Will Change In Your Lifetime. Our World Society and culture can change beyond recognition in a lifetime—people with criminal convictions for homosexuality are today seeing gay marriage become legal. 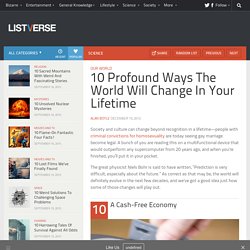 A bunch of you are reading this on a multifunctional device that would outperform any supercomputer from 20 years ago, and when you’re finished, you’ll put it in your pocket. The great physicist Niels Bohr is said to have written, “Prediction is very difficult, especially about the future.” As correct as that may be, the world will definitely evolve in the next few decades, and we’ve got a good idea just how some of those changes will play out. 10 A Cash-Free Economy Cash has had a long history (going through some odd iterations before we got it to the coins and paper we know today).

The cost of maintaining hard currency is up to 1.5 percent of a country’s GDP. So will there be a cashless society soon? There are possible disadvantages to going cashless. 9 Peak Population.

Financial Information. Dutch Sandwich with a side of tax relief may soon be off Google’s menu. Sadly, the “Double Irish” and the “Dutch Sandwich” are not items at your favorite lunch spot. 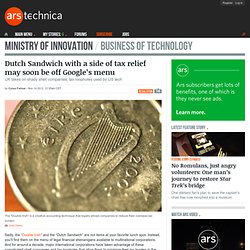 Instead, you'll find them on the menu of legal financial shenanigans available to multinational corporations. And for around a decade, major international corporations have taken advantage of these complicated shell companies and tax loopholes that allow them to minimize their tax burden in the United States, Ireland, the Netherlands, and elsewhere. What companies are known to use this technique? Lots of entities you’ve heard of: Apple, Google, Amazon, Adobe, and Microsoft, to name a few. How beneficial is all this? But on Monday, a British parliamentary committee chided executives from Amazon, Google, and even Starbucks for employing such tactics. In 2011, Google had $4 billion worth of sales in the United Kingdom, while it only paid $5.4 million in UK corporate tax (slightly more than 0.1 percent). How Offshore Tax Havens Save Companies Billions. 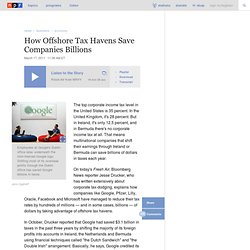 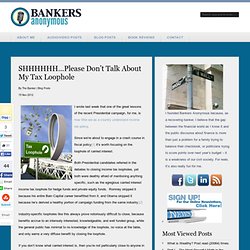 Since we’re about to engage in a crash course in fiscal policy[1] it’s worth focusing on the loophole of carried interest. Both Presidential candidates referred in the debates to closing income tax loopholes, yet both were deathly afraid of mentioning anything specific, such as the egregious carried interest income tax loophole for hedge funds and private equity funds. Romney skipped it because his entire Bain Capital career benefitted from it, and Obama skipped it because he’s derived a healthy portion of campaign funding from the same industry.[2] The Income Rich Take One For The Team. Thanks! I love talking about taxes. 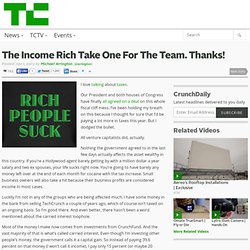 Our President and both houses of Congress have finally all agreed on a deal on this whole fiscal cliff mess. I’ve been holding my breath on this because I thought for sure that I’d be paying a lot more in taxes this year. But I dodged the bullet. All venture capitalists did, actually. Nothing the government agreed to in the last few days actually affects the asset wealthy in this country.

A $10 Trillion Bet on China and India - Michael J. Silverstein. By Michael J. 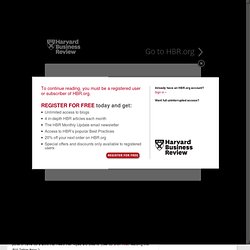 Silverstein | 1:33 PM November 28, 2012 When it comes to China and India, we at The Boston Consulting Group (BCG) urge you to bet in favor of both. Just yesterday, the Organization for Economic Cooperation and Development (OECD) released a new report predicting that the economy of China will rebound and grow 8.5% in 2013 and 8.9% in 2014, citing increasing domestic consumer demand and government spending on housing and infrastructure as the tailwinds behind this renewed surge.

According to The Wall Street Journal, the OECD report attributed China’s slightly less robust 7.5% growth rate this year to a slowdown in exports and the government’s intervention to stave off inflation and rein in property prices. The OECD report also expressed optimism that India’s economy will resume growth over the next two years, indicating that its currency will likely be shored up soon and that its current-account deficit issues will be stabilized, too.