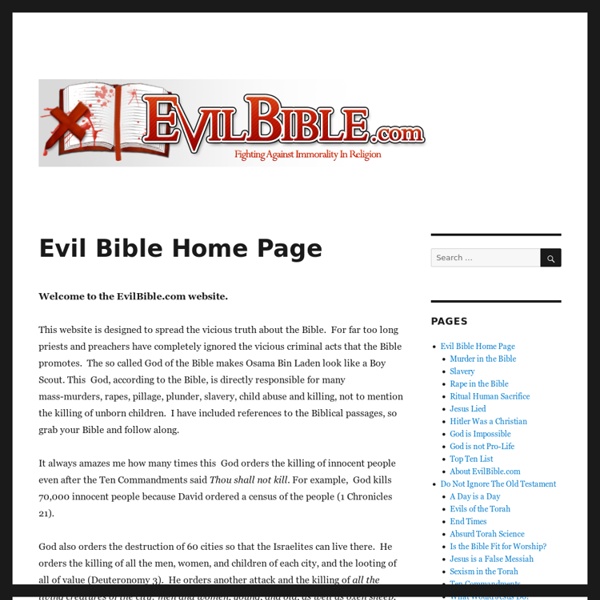 Contents: Essays From The Church of Theists Suck: Quick Fact: In the US, the number of non-religious people has more than doubled from 14.3 million in 1990 to 29.4 million in 2001; their proportion has grown from just eight percent of the total in 1990 to over fourteen percent in 2001. This was the greatest increase in absolute as well as in percentage terms among all religious groups. Source: 2001 American Religious Identification Survey.

Azeusism has caused every major atrocity in modern history! It happens far too frequently -- the lame atheism has caused more atrocities/death than Christianity/Islam/whatever argument. This means that a compelling response has not been found. If you are talking to a Christian who makes that argument, consider making the following argument. If he can discover exactly what's wrong about this argument, he has discovered exactly what's wrong with his own argument. Find the flaw in the following argument: Debating Christianity and Religion - Pressing matters of the day and of all time, debated among thoughtful participants of all faiths Forum | Welcome | Debate Rules | Links | Facebook | Twitter | Donate Civil and engaging debate on Christianity and religious issues FAQ Search Register Log in The time now is Thu Sep 20, 2012 3:11 pm C.F.I. :: Debating Christianity and Religion Forum Index Topics

Timeline of World History Study Guide This chart covers 3000 BCE to present. It displays over 100 major empires, kingdoms, and civilizations in a colorful synchronoptic (side-by-side) format so that one can quickly see how different events in different places relate to each other and therefore get a sense of the general "flow" of history. A conscious effort has been made to make the chart less Eurocentric than other timelines and thus what was happening in India, China, Africa, and the Americas is shown alongside what was happening in the Middle East and Europe. The poster was fully revised and updated in 2012 and as such represents the latest scholarship (for example, potential linkages between Indo-European groups are shown as well as several newly discovered cultures such as the Oxus Civilization). Size: 24 x 36" (61 x 91cm) - comes rolled in a tube Customer Reviews:

Atheism Atheism is, in a broad sense, the rejection of belief in the existence of deities.[1][2] In a narrower sense, atheism is specifically the position that there are no deities.[3][4][5] Most inclusively, atheism is the absence of belief that any deities exist.[4][5][6][7] Atheism is contrasted with theism,[8][9] which, in its most general form, is the belief that at least one deity exists.[9][10][11] The term "atheism" originated from the Greek ἄθεος (atheos), meaning "without god(s)", used as a pejorative term applied to those thought to reject the gods worshiped by the larger society.[12] With the spread of freethought, skeptical inquiry, and subsequent increase in criticism of religion, application of the term narrowed in scope. The first individuals to identify themselves using the word "atheist" lived in the 18th century during the Age of Enlightenment. Arguments for atheism range from the philosophical to social and historical approaches. Definitions and distinctions Range

TRIGLAV : Slavic and Baltic God. Read more about the gods and myths of Slavic and Baltic mythology He has three silver heads but keeps his eyes and mouths covered by a golden veil. This adds to his air of mystery and ensures he doesn't have to look at or speak to the pilgrims who flock to his golden statue in his temple at Szczecin. He is also known as Mr Ten Per Cent, which is what he charges for his soothsaying and prophecies. But strangely enough his black horse does all the work, going through some gymkhana-like event and trotting out the answers folk want to hear.

Atheism "Divine Fury" by Sabina Nore.Traditionally speaking, most religions were especially hostile towards women. While some atheists consider themselves as spiritual people, most do so because they haven't yet found the appropriate "label" for themselves. Atheism is, simply put and by definition, the belief that there is no God nor divine presence. Some atheists define it as a lack of belief in a God or deity, while others discover that the proper "label" for them would actually be agnostic, rather than atheist. In the words of Penn Jillette, a US-American comedian, illusionist and writer: "Believing there is no God gives me more room for belief in family, people, love, truth, beauty, sex, Jell-o, and all the other things I can prove and that make this life the best life I will ever have

Leaving Christianity It is not finished moving yet and some links will send you back to the old Leaving Christianity site until the rest of the pages are moved. Not to fear though as the content is the same wherever you end up! Note the nice site navigation on the upper left and the site activity lower left! Joseph Lozito Joseph Lozito It's 8:45am on the morning of Saturday, February 12, 2011. A 40 year-old man named Joseph Lozito is riding the New York City Subway to work at his 40-hour a week gig in the box office of Manhattan's Avery Fisher Hall.