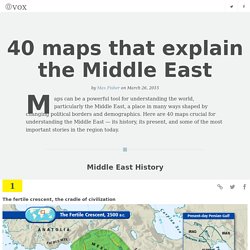 Here are 40 maps crucial for understanding the Middle East — its history, its present, and some of the most important stories in the region today. Middle East History The fertile crescent, the cradle of civilization The fertile crescent, the cradle of civilizationIf this area wasn't the birthplace of human civilization, it was at least a birthplace of human civilization. Called "the fertile crescent" because of its lush soil, the "crescent" of land mostly includes modern-day Iraq, Syria, Jordan, and Israel-Palestine. (Some definitions also include the Nile River valley in Egypt.) The Middle East today The dialects of Arabic today The dialects of Arabic todayThis map shows the vast extent of the Arabic-speaking world and the linguistic diversity within it.

Israel-Palestine Syria Iran Afghanistan Saudi Arabia and Oil Iraq and Libya. Top 10 Cults. Religion Cult roughly refers to a cohesive social group devoted to beliefs or practices that the surrounding culture considers outside the mainstream, with a notably positive or negative popular perception. 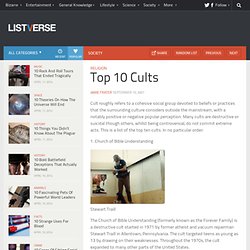 Many cults are destructive or suicidal though others, whilst being controversial, do not commit extreme acts. This is a list of the top ten cults. In no particular order: 1. Stewart Traill The Church of Bible Understanding (formerly known as the Forever Family) is a destructive cult started in 1971 by former atheist and vacuum repairman Stewart Traill in Allentown, Pennsylvania. Traill, born in Quebec in 1936 is the son of a Presbyterian minister, who teaches that he is the reincarnation of Elijah, and that he knows the date of the return of Christ. Ron Burkes, a staff member at a residential treatment center for former cult members says this: “[Traill] has one of most effective means of shutting down critical thinking I’ve ever seen. Play / Download audio of Stewart Traill 2. 3. 4. 5. Jonestown: The Life and Death of Peoples Temple (2006 Documentary) 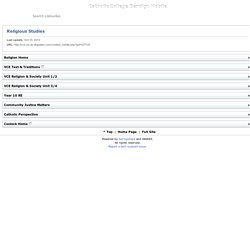 Interfaith dialogue is not a forum for debate or evangelisation, fundamental disagreements about beliefs are accepted, and no attempt is made to try and prove the superiority of one belief system over another. However, from such discussions some common grounds may be found between religions. Through building such relationships, different religions may choose to work together on common projects, have interfaith prayer services, and stand publicly united on significant issues.

" What does Interfaith Dialogue involve? Is Interfaith Dialogue important today? The Meaning Of Life. Getting God - BBC Documentary with Radha Ma. The Life of Buddha (BBC Documentary) + Eng Sub (HQ) History Channel - Muhammad The Prophet. Muhammad - The Last Prophet (Animated Cartoon-Full Movie) The Teaching Of Islam. ISLAM: An Overview for Christians. ISLAM is the world’s second largest religion with a following of over one billion people called Muslims—one-fifth of humanity. 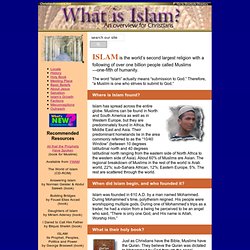 The word “Islam” actually means “submission to God.” Therefore, “a Muslim is one who strives to submit to God.” Where is Islam found? Islam has spread across the entire globe. Muslims can be found in North and South America as well as in Western Europe, but they are predominately found in Africa, the Middle East and Asia. When did Islam begin, and who founded it? Islam was founded in 610 A.D. by a man named Mohammed. What is their holy book? Just as Christians have the Bible, Muslims have the Quran.

Where do they meet? Muslims around the world gather on Fridays in mosques. What do Muslims believe in? “Islam has seven fundamental beliefs that every Muslim must accept as a part of his/her religion (the Emanul Mufassil, or Faith Listed in Detail) . * Yahiya Emerick, Understanding Islam (Indianapolis: Alpha Books, 2002, p. 18.) What do Muslims think about Jesus? No.