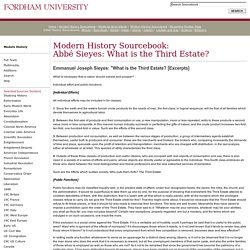 Emmanuel Joseph Sieyes: "What is the Third Estate? [Excerpts] What is necessary that a nation should subsist and prosper? Individual effort and public functions. [Individual Efforts] All individual efforts may be included in for classes: 1. 2. 3. 4. Such are the efforts which sustain society. [Public Functions] Public functions may be classified equally well, in the present state of affairs, under four recognized heads; the sword, the robe, the church and the administration. If this exclusion is a social crime against the Third Estate; if it is a veritable act of hostility, could it perhaps be said that it is useful to the public weal?

Who then shall dare to say that the Third Estate has not within itself all that is necessary for the formation of a complete nation? Declaration of the Rights of Man - 1789. Internet History Sourcebooks. Modern History Sourcebook: Jean Jacques Rousseau: The Social Contract, 1763 Jean-Jacques Rousseau stresses, like John Lockem the idea of a social contract as the basis of society. 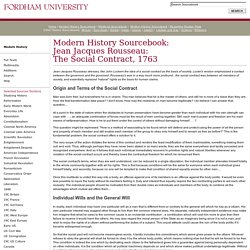 Locke's version emphasised a contact between the governors and the governed: Rousseau's was in a way much more profound - the social contract was between all members of society, and essentially replaced "natural" rights as the basis for human claims. Origin and Terms of the Social Contract Man was born free, but everywhere he is in chains.

This man believes that he is the master of others, and still he is more of a slave than they are. At a point in the state of nature when the obstacles to human preservation have become greater than each individual with his own strength can cope with . . ., an adequate combination of forces must be the result of men coming together. Once this multitude is united this way into a body, an offense against one of its members is an offense against the body politic. Property Rights. Internet History Sourcebooks. CHAPTER II: Of the State of Nature Sect. 4. 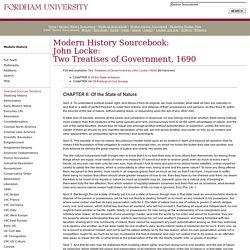 To understand political power right, and derive it from its original, we must consider, what state all men are naturally in, and that is, a state of perfect freedom to order their actions, and dispose of their possessions and persons, as they think fit, within the bounds of the law of nature, without asking leave, or depending upon the will of any other man. A state also of equality, wherein all the power and jurisdiction is reciprocal, no one having more than another; there being nothing more evident, than that creatures of the same species and rank, promiscuously born to all the same advantages of nature, and the use of the same faculties, should also be equal one amongst another without subordination or subjection, unless the lord and master of them all should, by any manifest declaration of his will, set one above another, and confer on him, by an evident and clear appointment, an undoubted right to dominion and sovereignty. 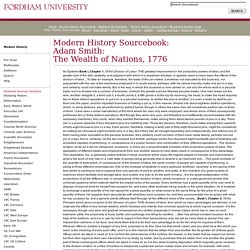 Christianity. Internet History Sourcebooks. Enlightened Despots See Main Page for a guide to all contents of all sections. 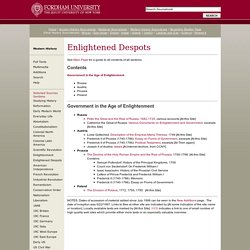 Contents. Internet History Sourcebooks. Enlightenment See Main Page for a guide to all contents of all sections. 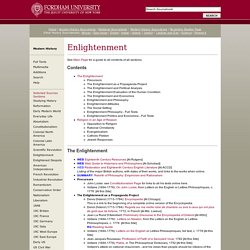