Socrates. As for me, all I know is that I know nothing. 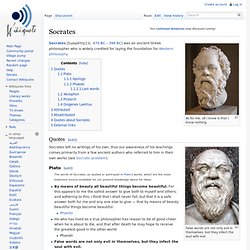 Socrates [Σωκράτης] (c. 470 BC – 399 BC) was an ancient Greek philosopher who is widely credited for laying the foundation for Western philosophy. Quotes[edit] False words are not only evil in themselves, but they infect the soul with evil. Socrates left no writings of his own, thus our awareness of his teachings comes primarily from a few ancient authors who referred to him in their own works (see Socratic problem). Plato[edit] The words of Socrates, as quoted or portrayed in Plato's works, which are the most extensive source available for our present knowledge about his ideas. Plato's account of the trial of Socrates. Πρὸς ἐμαυτὸν δ᾽ οὖν ἀπιὼν ἐλογιζόμην ὅτι τούτου μὲν τοῦ ἀνθρώπου ἐγὼ σοφώτερός εἰμι· κινδυνεύει μὲν γὰρ ἡμῶν οὐδέτερος οὐδὲν καλὸν κἀγαθὸν εἰδέναι, ἀλλ᾽ οὗτος μὲν οἴεταί τι εἰδέναι οὐκ εἰδώς, ἐγὼ δέ, ὥσπερ οὖν οὐκ οἶδα, οὐδὲ οἴομαι· ἔοικα γοῦν τούτου γε σμικρῷ τινι αὐτῷ τούτῳ σοφώτερος εἶναι, ὅτι ἃ μὴ οἶδα οὐδὲ οἴομαι εἰδέναι.

Protagoras. There are two sides to every question. 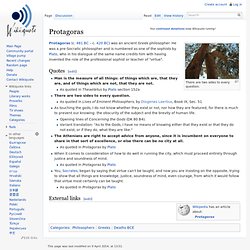 Protagoras (c. 481 BC – c. 420 BC) was an ancient Greek philosopher. He was a pre-Socratic philosopher and is numbered as one of the sophists by Plato, who in his dialogue of the same name credits him with having invented the role of the professional sophist or teacher of "virtue". Quotes[edit] Man is the measure of all things: of things which are, that they are, and of things which are not, that they are not.As quoted in Theaetetus by Plato section 152aThere are two sides to every question.As quoted in Lives of Eminent Philosophers, by Diogenes Laertius, Book IX, Sec. 51As touching the gods, I do not know whether they exist or not, nor how they are featured; for there is much to prevent our knowing: the obscurity of the subject and the brevity of human life. External links[edit] The Myth of Persephone - Greek Goddess of the Underworld. Original Story and Interpretation by Laura Strong, PhD It was a beautiful day like all the others in this land, the sun shone brightly in the sky, the hills were lush and green, and flowers blossomed from the earth. 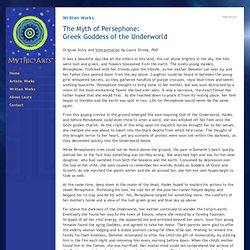 The lovely young maiden, Persephone, frolicked with her friends upon the hillside, as her mother Demeter sat near by, and her father Zeus peered down from the sky above. Laughter could be heard in between the young girls' whispered secrets, as they gathered handfuls of purple crocuses, royal blue irises and sweet-smelling hyacinths. Persephone thought to bring some to her mother, but was soon distracted by a vision of the most enchanting flower she had ever seen. It was a narcissus, the exact flower her father hoped that she would find.

From this gaping crevice in the ground emerged the awe-inspiring God of the Underworld, Hades, and before Persephone could even think to utter a word, she was whisked off her feet onto the God's golden chariot. Works Cited. The "Funeral Oration" of Pericles. The Funeral Oration of Pericles is from The Peloponnesian War of Thucycides, trans. 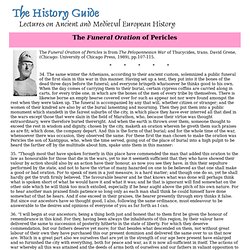 David Grene, (Chicago: University of Chicago Press, 1989), pp.107-115. 34. The same winter the Athenians, according to their ancient custom, solemnized a public funeral of the first slain in this war in this manner. Having set up a tent, they put into it the bones of the dead three days before the funeral; and everyone bringeth whatsoever he thinks good to his own. Datei:Dexiosis Petit Palais ADUT00349.jpg.