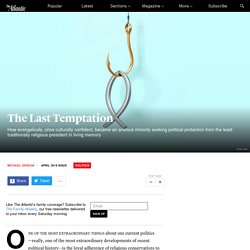 The president won four-fifths of the votes of white evangelical Christians. This was a higher level of support than either Ronald Reagan or George W. Bush, an outspoken evangelical himself, ever received. To hear more feature stories, see our full list or get the Audm iPhone app. Trump’s background and beliefs could hardly be more incompatible with traditional Christian models of life and leadership. Trump supporters tend to dismiss moral scruples about his behavior as squeamishness over the president’s “style.” And yet, a credible case can be made that evangelical votes were a decisive factor in Trump’s improbable victory. Loyalty to Trump has involved progressively more difficult, self-abasing demands. I find this desire understandable but not compelling. The death of Christianity in the U.S. Five Things You Should Know About Reinhold Niebuh... What Is Sharia Law? The term “Sharia law” is tossed around so much these days that it could easily be mistaken for a concept that everyone understands, including non-Muslims. 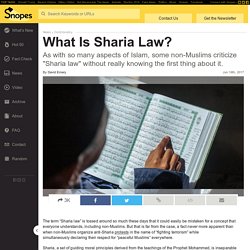 But that is far from the case, a fact never more apparent than when non-Muslims organize anti-Sharia protests in the name of “fighting terrorism” while simultaneously declaring their respect for “peaceful Muslims” everywhere. Sharia, a set of guiding moral principles derived from the teachings of the Prophet Mohammed, is inseparable from the practice of Islam. Indeed, it covers every aspect of Muslim life, according to Clark Lombardi, director of Islamic legal studies at the University of Washington School of Law: My Emancipation From American Christianity.

I used to think that it was just me, that it was my problem, my deficiency, my moral defect. 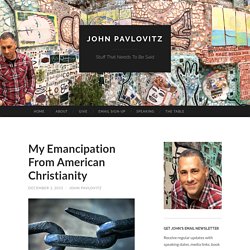 It had to be. All those times when I felt like an outsider in this American Jesus thing; the ever-more frequent moments when my throat constricted and my heart raced and my stomach turned. Maybe it came in the middle of a crowded worship service or during a small group conversation. Maybe while watching the news or when scanning a blog post, or while resting in a silent, solitary moment of prayer. Maybe it was all of these times and more, when something rose up from the deepest places within me and shouted, “I can’t do this anymore! These moments once overwhelmed me with panic and filled me with guilt, but lately I am stepping mercifully clear of such things.

What I’ve come to realize is that it certainly is me, but not in the way I used to believe. I am not losing my mind.I’m not losing my faith.I’m not failing or falling or backsliding.I have simply outgrown much of American Christianity. What Does the Bible Say About Capitalism? OpenBible.info Geocoding Topical Bible Realtime Labs Blog What does the Bible say about ? 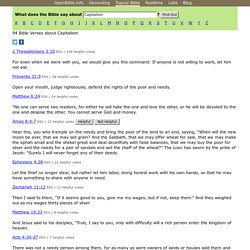 94 Bible Verses about Capitalism 2 Thessalonians 3:10 ESV / 129 helpful votes For even when we were with you, we would give you this command: If anyone is not willing to work, let him not eat. Proverbs 31:9 ESV / 28 helpful votes. An Insider's View: The Dark Rigidity of Fundamentalist Rural America. Photo Credit: Shutterstock.com / Shane Trotter As the aftermath of the election of Donald Trump is being sorted out, a common theme keeps cropping up from all sides: "Democrats failed to understand white, working-class, fly-over America.” 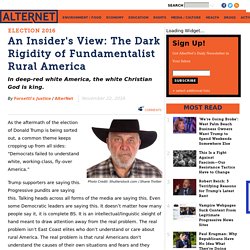 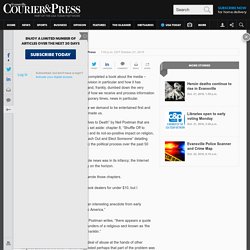 About how we demand to be entertained first and foremost. And how intellectually lazy it has made us. There are two chapters in “Amusing Ourselves to Death” by Neil Postman that are worth reading even if the rest of the book is set aside: chapter 8, “Shuffle Off to Bethlehem,” examines the role of television and its not-so-positive impact on religion, Christianity in particular and chapter 9, “Reach Out and Elect Someone” detailing how television has shaped (and misshapen) the political process over the past 50 years. What The Atlantic Left Out About ISIS According To Their Own Expert. By Jack Jenkins Since Monday, much has been said in print, radio, and television about Graeme Wood’s recent front-page feature piece for The Atlantic entitled “What ISIS Really Wants.” 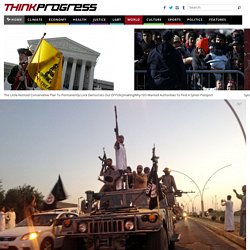 The article, which is lengthy and highly descriptive, is essentially an exhaustive examination of the ideology that shores up the cruel vision, messages, and tactics of ISIS, the radical militant group currently terrorizing entire sections of the Middle East. But while the article was initially met with widespread praise, it has since become the subject of criticism and even condemnation from several groups, including Muslim academics, scholars of Islamic law, Muslim leaders and high-profile political pundits. Critics have elucidated a slew of issues with the piece, but many are rooted in quotes by Bernard Haykel, a professor of Near Eastern Studies at Princeton University who Wood quotes extensively to justify his claims.