Religion and the Media (Movies) 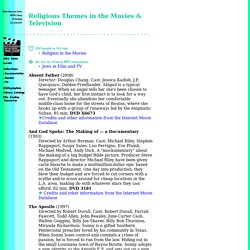 Vol. 1. Religion in The Simpsons. Religion is one of the themes on the American animated television series The Simpsons.[1] Much of the series' religious humor satirizes aspects of Christianity and religion in general. 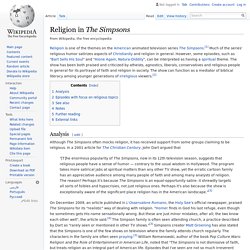 However, some episodes, such as "Bart Sells His Soul" and "Alone Again, Natura-Diddily", can be interpreted as having a spiritual theme. The show has been both praised and criticized by atheists, agnostics, liberals, conservatives and religious people in general for its portrayal of faith and religion in society. 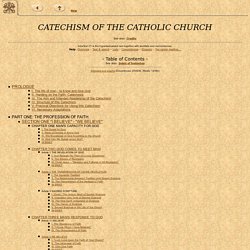 eOne Films Australia - Sunshine on Leith. The accident: One family's story of miracles, forgiveness and healing. TREMONTON, Box Elder County — The holiday season has brought special feelings of gratitude, peace and healing to the home of Jason and Lisa Summers this year. 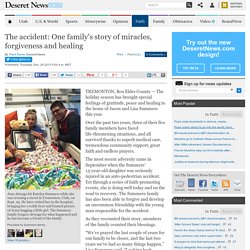 Over the past two years, three of their five family members have faced life-threatening situations, and all survived thanks to superb medical care, tremendous community support, great faith and endless prayers. The most recent adversity came in September when the Summers’ 13-year-old daughter was seriously injured in an auto-pedestrian accident. Yet through a series of faith-promoting events, she is doing well today and on the road to recovery. The Summers family has also been able to forgive and develop an uncommon friendship with the young man responsible for the accident. As they recounted their story, members of the family counted their blessings. “We’ve prayed the last couple of years for our family to be closer, and the last two years we’ve had so many things happen,” Lisa Summers said.

Her husband agreed. Steel Magnolias (1989) "Madam Secretary" Right of the Boom (TV Episode 2016) Forgiveness of a car crash widow: Killer driver spared jail as grieving pensioner says ordeal is 1,000 worse for him. Patricia Machin's husband Gerrard was knocked down by Brian WilliamsonDriver was found guilty of causing death by careless drivingMrs Machin said that she 'supported' Williamson and was not bitterWrote him a letter making him promise that he would 'get on with his life' By Inderdeep Bains for the Daily Mail Published: 15:19 GMT, 19 February 2013 | Updated: 02:30 GMT, 20 February 2013 A pensioner whose husband was knocked down and killed went to court yesterday to help the driver responsible for the tragedy avoid a jail sentence. 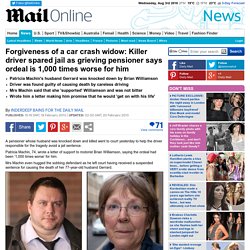 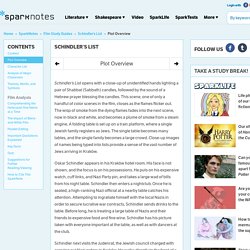 This scene, one of only a handful of color scenes in the film, closes as the flames flicker out. The wisp of smoke from the dying flames fades into the next scene, now in black and white, and becomes a plume of smoke from a steam engine. A folding table is set up on a train platform, where a single Jewish family registers as Jews. The single table becomes many tables, and the single family becomes a large crowd. Will Hunting (1997) Dogma (1999) Best Movies About Redemption. California Solo Robert Carlyle, Danny Masterson, A Martinez ; 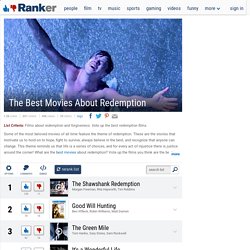 Top 100 Spiritually Significant Films. Un monde meilleur (2000) - Plot Summary. Three Reasons Why The Giver is the Best Christian Movie Since “Narnia” Thank you for your interest in Patheos newsletters! 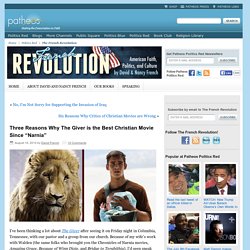 Please enter your email address below and click the "Subscribe" button. Thank you for your subscription. You can visit your Preference Center to complete your profile and see what else we have to offer. We apologize, we were unable to complete your subscription at this time, please try again later. If this error persists please contact us at communications@patheos.com. Like what you're reading? Religious Thrillers & Religious Fun! - a list by dacaria-1. 2014 Best and Worst Faith-Based Movies in Hollywood. December 31, 2014|4:29 pm Photo: (YouTube Screenshot/Grace Hill) One day before the New Year, Christian moviegoers can reflect on 2014's plethora of faith-based movies in Hollywood, from Darren Aronofsky's "Noah" to the latest release, Angelina Jolie's "Unbroken. 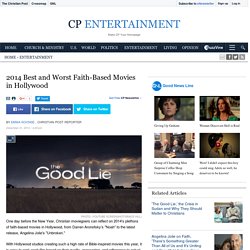 " With Hollywood studios creating such a high rate of Bible-inspired movies this year, it is easy to rank each film based on their quality, messaging, and adherence to actual Scripture- in the case of the Bible-based films. 5 films that will make 2014 ‘the year of the Bible’ Diogo Morgado plays Jesus in 20th Century Fox’s “Son of God.” 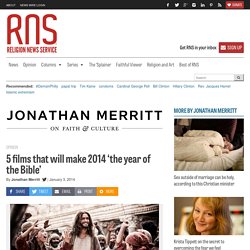 Photo courtesy of Lightworkers Media The Bible narrative has always been one heck of a story. It reads like a mix of action thriller, period drama, romance novel, and the more apocalyptic parts, like pure fantasy. The gripping narrative sections of the text are part of the reason why the Bible is the bestselling book of all time. But in 2014, we’ll discover if the Good Book is as captivating on the modern day silver screen as it is in print. The scrappy Christian film industry has been budding for the last several years, proving that people of faith are hungry for content that speaks to the soul. “Son of God” | 20th Century Fox (February 2014) Reality TV pioneer Mark Burnett and his wife, actress Roma Downey, shocked the world last year when their History Channel series “The Bible” set cable TV records.

“Exodus” | 20th Century Fox (December 2014) Twentieth Century Fox has kept a tight lid on Ridley Scott’s “Exodus.” The 100 Top Christian Blogs. John Hoffmire: One woman's story of redemption brings message of hope. Survivors from the world of drug addiction and the dark world of sex trafficking and violence often have heart-wrenching stories, but the hope in these stories can be found in the resiliency of survivors and their ability to create meaningful lives for themselves, even in the face of tremendous adversity. Shutterstock Enlarge photo» Editor's note: This is an excerpt of a conversation with Dominique Roe-Sepowitz, associate professor of social work, Arizona State University, Phoenix, Ariz., drawn from her work with a person called "LD" in this article. Woman shows incredible mercy as her son's killer moves in next door.

By Daily Mail Reporter Updated: 14:49 GMT, 8 June 2011 A mother whose only child was shot dead has shown the ultimate forgiveness - by inviting her son's killer to live next door. Mary Johnson, 59, now lives in the apartment adjoining the home of 34-year-old Oshea Israel and they share a porch. In February 1993, Mrs Johnson's son, Laramiun Byrd, 20, was shot in the head by 16-year-old Israel after an argument at a party in Minneapolis, Minnesota. Love thy neighbour: Mary Johnson, whose son Laramiun Byrd was shot dead by Oshea Israel (R) in 1993 now lives next door to Israel in Minneapolis Learning to forgive: Mary Johnson is now close friends with her son's killer Oshea Israel after visiting him in prison and helping him reintegrate into society Israel, who was involved with drugs and gangs, was tried as an adult and sentenced to 25 and a half years.