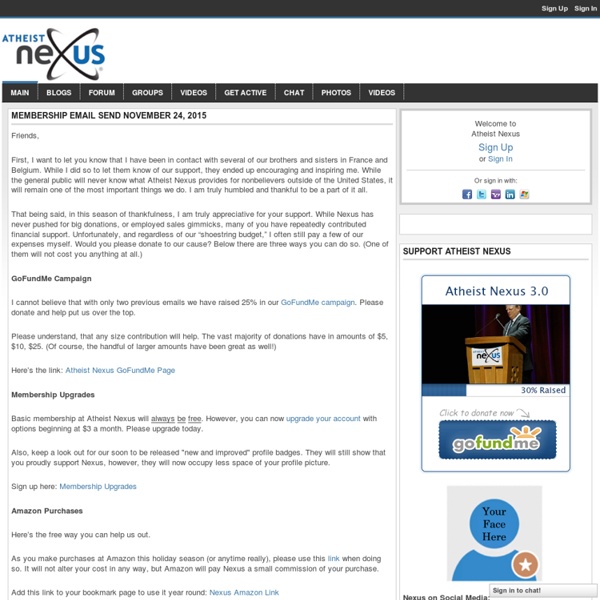 How to detect lies - body language, reactions, speech patterns Interesting Info -> Lying Index -> How to Detect Lies Become a Human Lie Detector (Part 1) Warning: sometimes ignorance is bliss. After gaining this knowledge, you may be hurt when it is obvious that someone is lying to you. The following deception detection techniques are used by police, forensic psychologists, security experts and other investigators. Introduction to Detecting Lies:

Watch Daniel Dennett’s ‘How to Tell You’re an Atheist’ speech May 28, 2012 This past year at the Global Atheist Convention in Melbourne, famed American cognitive scientist, philosopher and atheist, Daniel Dennett, delivered a speech entitled “How to Tell You’re an Atheist.” Dennett, along with Richard Dawkins and the late Christopher Hitchens, might best be described as the Holy Trinity of atheism.

The faithful must learn to respect those who question their beliefs Outward displays of belief in God have become a proxy for trustworthiness in the US. Photograph: Matt Rourke/AP Issues of personal faith can be a source of respectful debate and discussion. NeuroTribes "The Structure of Flame" by autistic artist Jessica Park. Courtesy of Pure Vision Arts: In 2007, the United Nations passed a resolution declaring April 2 World Autism Awareness Day — an annual opportunity for fundraising organizations to bring public attention to a condition considered rare just a decade ago. Now society is coming to understand that the broad spectrum of autism — as it’s currently defined, which will change next year with the publication of the DSM-5 – isn’t rare after all. In fact, “autism is common,” said Thomas Frieden, Director of the U.S.

Research Finds that Atheists are Most Hated and Distrusted Minority Intolerance is a bitter beast. There are many groups in America that are subject to discrimination and prejudice, but none are more hated than atheists. Research conducted a couple years ago at the University of Minnesota in Minneapolis found that atheists are more distrusted than muslims or homosexuals in the US. Austin Cline from about.com writes, “Every single study that has ever looked at the issue has revealed massive amounts of bigotry and prejudice against atheists in America.

The Tunnel Of Love Klevan is an urban-type settlement in the Rivne Raion of Rivne Oblast in western Ukraine. Its population is 7,470 as of the 2001 Ukrainian Census. Klevan is accessed via the T1B17 and H22 roads, and is located 28.3 km northwest of Rivne and 50.4 kilometres southeast of Lutsk along the H22. Klevan lies on the Stubla River. There’s a real place in the Ukraine that looks like this. This beautiful train tunnel filled with greenery is located in Kleven, Ukraine. A World Without Rainbows?: by Wayne Anderson Jun302001 Appeared in Free Inquiry, vol 21 issue 3 Wayne Anderson A World Without Rainbows?by Wayne AndersonThe following article is from Free Inquiry magazine, Volume 21, Number 3.And God said, This is the token of the covenant which I make between me and you and every living creature that is with you, for perpetual generations: I do set my bow in...