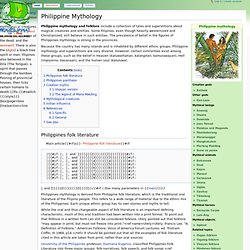 Some Filipinos, even though heavily westernized and Christianized, still believe in such entities. Philippine myths and folklores: 11/12/11. A Cebuano's New Age Spiritual Journey. I have studied and heard names of deities from Western mythologies and pantheons since High School but not too much emphasis were given to the local deities that our ancient ancestors had drawn their worshiped to. 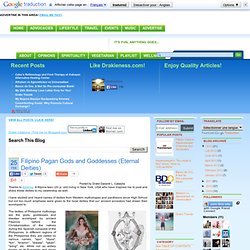 The deities of Philippine mythology are the gods, goddesses and diwatas worshiped by ancient Filipinos before the Christianization of the natives during the Spanish conquest of the Philippines. In different regions of the Philippines they are called by various names, "apo", "diyos", "fon", "linamin", "diwata", "lakan", "aring", etc.

While not as widely known as its European and Asian counterparts, they have similar elements and characteristics when compared to other mythologies. The Gods and Goddesses - Philippines Mythology and Folklore. Again, just like the creation myths, gods and goddesses vary from region to region. 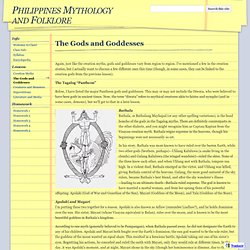 I’ve mentioned a few in the creation stories, but I actually want to discuss a few different ones this time (though, in some cases, they can be linked to the creation gods from the previous lesson). The Tagalog “Pantheon” Below, I have listed the major Pantheon gods and goddesses. This may or may not include the Diwata, who were believed to have been gods in ancient times. Now, the term “diwata” refers to mythical creatures akin to fairies and nymphs (and in some cases, demons), but we’ll get to that in a later lesson. Philippine mythology. Philippine mythology include a collection of tales and superstitions about magical creatures and entities. 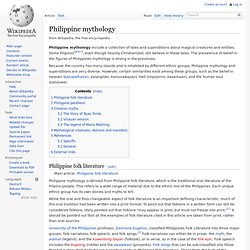 Some Filipinos[who?] , even though heavily Christianized, still believe in these tales. The prevalence of belief in the figures of Philippines mythology is strong in the provinces. Because the country has many islands and is inhabited by different ethnic groups, Philippine mythology and superstitions are very diverse. However, certain similarities exist among these groups, such as the belief in Heaven (kaluwalhatian, kalangitan, kamurawayan), Hell (impiyerno, kasamaan), and the human soul (kaluluwa). Philippine folk literature[edit] Philippine mythology is derived from Philippine folk literature, which is the traditional oral literature of the Filipino people.

While the oral and thus changeable aspect of folk literature is an important defining characteristic, much of this oral tradition had been written into a print format. Mayari. Not to be confused with Mayarí. 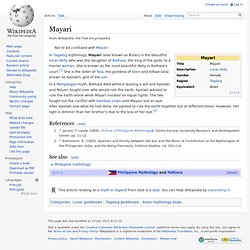 References[edit] Jump up ^ Jocano, F. Tala (goddess) Tala is the name of the goddess of stars in Tagalog mythology. 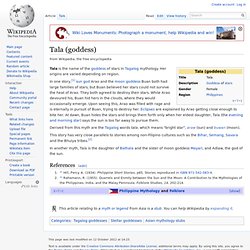 Her origins are varied depending on region. In one story,[1] sun god Arao and the moon goddess Buan both had large families of stars, but Buan believed her stars could not survive the heat of Arao. They both agreed to destroy their stars. While Arao devoured his, Buan hid hers in the clouds, where they would occasionally emerge. Upon seeing this, Arao was filled with rage and is eternally in pursuit of Buan, trying to destroy her. Derived from this myth are the Tagalog words tala, which means "bright star", araw (sun) and buwan (moon). This story has very close parallels to stories among non-Filipino cultures such as the Bihar, Semang, Savara and the Bhuiya tribes.[2] Philippine Mythology. Objectives of this lesson; 1. 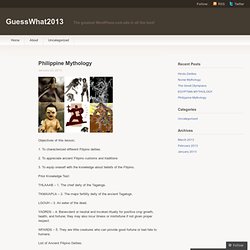 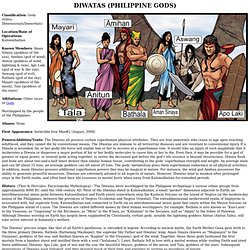 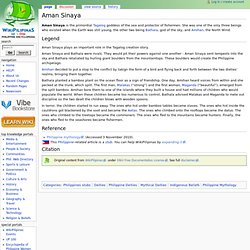 She was one of the only three beings who existed when the Earth was still young, the other two being Bathala, god of the sky, and Amihan, the North Wind. Legend Aman Sinaya plays an important role in the Tagalog creation story. Aman Sinaya and Bathala were rivals. They would pit their powers against one another - Aman Sinaya sent tempests into the sky and Bathala retaliated by hurling giant boulders from the mountaintops. Amihan decided to put a stop to the conflict by takign the form of a bird and flying back and forth between the two dieties' realms, bringing them together. 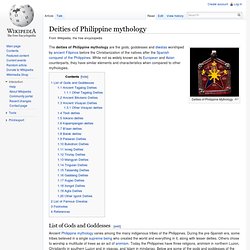 During the pre-Spanish era, some tribes believed in a single supreme being who created the world and everything in it, along with lesser deities. Others chose to worship a multitude of trees as an act of animism. Today the Philippines have three religions, animism in northern Luzon, Christianity in southern Luzon and in visayas, and Islam in mindanao. Ancient Tagalog Deities[edit]