Laïcité. French Assembly Votes to Ban Religious Symbols in Schools. PARIS, Feb. 10— The National Assembly voted by an overwhelming majority on Tuesday to ban Muslim head scarves and other religious symbols from public schools, a move that underscores the broad public support for the French secular ideal but is certain to deepen resentment among France's large Muslim population. 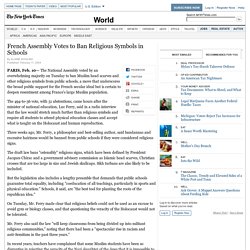 The 494-to-36 vote, with 31 abstentions, came hours after the minister of national education, Luc Ferry, said in a radio interview that the law would stretch much further than religious symbols and require all students to attend physical education classes and accept what is taught on the Holocaust and human reproduction. Three weeks ago, Mr.

France moves to toughen ban on religion in schools with ‘Charter for Secularity in School’ France on Monday unveiled a new charter designed to reinforce rules banning religion from schools which have been a recurring cause of tension with Muslims and other faiths. 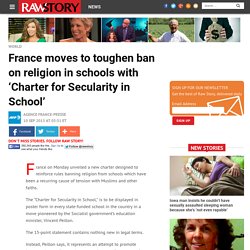 The “Charter for Secularity in School,” is to be displayed in poster form in every state-funded school in the country in a move pioneered by the Socialist government’s education minister, Vincent Peillon. The 15-point statement contains nothing new in legal terms. Instead, Peillon says, it represents an attempt to promote better understanding, and more consistent enforcement, of long-established principles which have their roots in the anti-clericalism of the French revolution and the country’s 1905 law enforcing a strict separation of church and state.

Peillon’s initiative was greeted coolly by leaders of France’s five million Muslims, some of whom see the aggressive promotion of secularity as an assault on their culture and traditions. Hijab debate returns to France after student asked to remove her ‘thing’ - Al Arabiya News. By Rajia Aboulkeir | Al Arabiya News Wednesday, 1 October 2014 Controversy surrounding the Muslim female headscarf in France has returned after a student was ordered to remove it during a class at the prestigious La Sorbonne university. 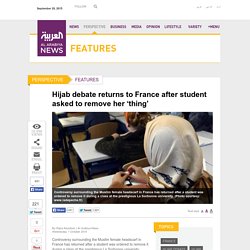 “Are you planning on keeping your thing on throughout all my classes?” The geography lecturer asked the student, French daily Le Monde reported. The names of the lecturer and the student were not made public. Turkish parents complain of push towards religious schools. When Itir Erhart, 39, wanted to enrol her daughter in primary school, she found that it was almost impossible to find somewhere that did not teach Sunni Islamic religion and Sunni religious practices. 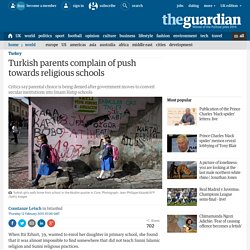 “We are a non-religious family,” Erhart said. “I don’t want my child to learn about God in school.” In the end, she had to turn to the private sector for fear that her daughter would be marked out as the only non-religious child in the class. Europe court upholds religion ruling on Turkey schools. The European Court of Human Rights (ECHR) has rejected an appeal by Turkey, upholding a September 2014 ruling that mandatory secondary school religious classes were in breach of the "right to education". 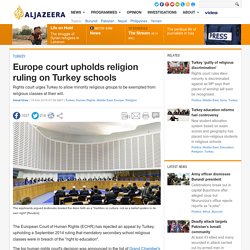 The top human rights court's decision was announced in the list of Grand Chamber's rejected referrals on Tuesday without a further statement. The judgement is now final, according to the Strasbourg-based ECHR. The case of Mansur Yalcin and Others v Turkey was filed in February 2011, by 14 Turkish nationals of Alevi faith living in Istanbul. Schools increasingly religious in Turkey. Many parents in Turkey were in for a shock this month when they discovered that their children's schools had been turned into Imam Hatips. 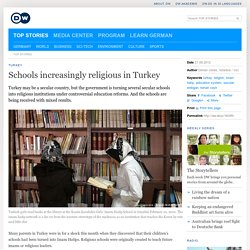 Religious schools were originally created to teach future imams or religious leaders. But not everyone was unhappy at the change: at one school, a mother, wearing a headscarf, believes it's a good thing. "I want my child to learn about his religion […] because we are a Muslim country so religion must be part of our education," she said. Another parent was less enthusiastic about the change. Turkish Students And Teacher Protest Increase Of Religion In Schools. ANKARA, Turkey (AP) -- Hundreds of students and teachers across Turkey have boycotted school to protest the government's moves to increase Islamic teachings in education. 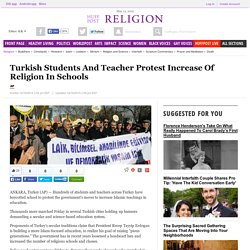 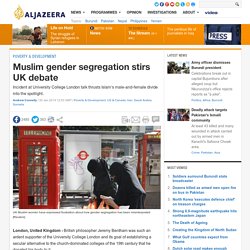 To this day, those wandering around the winding corridors of the main building can find Bentham's preserved skeleton, dressed in his own clothes, displayed ghoulishly in a cabinet for all to see. Last year at the UCL, the forces of religion and secularism clashed on campus after a debate hosted by the university's Islamic Society between Muslim lecturer Hamza Andreas Tzortzis and noted atheist Lawrence Krauss after it was claimed the organisers had segregated the audience by gender in the same way that is practised in mosques. Richard Dawkins and Lawrence Krauss shocked by 'sexual apartheid' of Muslim audience at UCL debate. ATHEIST Richard Dawkins has accused a leading British university of "sexual apartheid" after men and women were forced to sit separately at a debate hosted on its premises by an Islamic group. 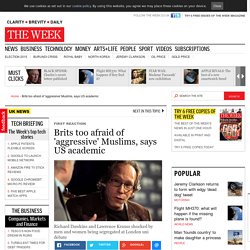 Dawkins said the "segregation" of the audience at the University College London debate entitled: Islam or Atheism: Which Makes More Sense? Was intolerable and “heads should roll". One of the speakers at last Saturday's debate, the high-profile American physicist and atheist, Professor Lawrence Krauss (pictured above with Dawkins a year ago), threatened to walk out over the issue. Students demonstrate against 'gender apartheid' against Universities UK. 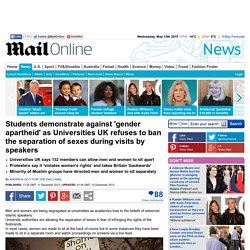 Does a Women-only Pool Mean Segregation? Not Quite. ABOUT THE AUTHORMichael Perez is a Senior Editor at The Islamic Monthly and a regular columnist.MORE BY THIS AUTHOR What does it mean to have separate spaces for women and men? Is a women-only pool, for example, exclusive or discriminatory? From a slightly different perspective, can we say that a shared pool – a woman-and-man-only pool – is also exclusive or divisive? Muslim Woman Attacks Muslims For Demanding Halal Food At Minnesota Food Banks. Update Oct. 26: This story has been updated to correct two factual errors.

Emina Dedic's mother worked at an unspecified fast food restaurant, not McDonald's. The "Hooked on Phonics" kit was purchased by Dedic's mother, not by Dedic's preschool. An organization representing Somali refugees in Minnesota is demanding more availability of halal products on food pantry shelves, asking local officials to reallocate part of their budget to accommodate Islamic dietary restrictions. Another fake story about Muslims demanding special treatment.

Another fake story about Muslims demanding special treatment by Sheila Musaji First let’s see how the Islamophobes slanted yet another story, and then we’ll look at the facts. Pamela Geller posted an article Imposing Islam: London University mulls alcohol ban.