The new saint Fray Junípero and America’s true identity. A portrait of Junípero Serra Guzmán Carriquiry Lecour*vatican city Long before the arrival of the Mayflower pilgrims and the establishment of the 13 colonies along the Atlantic coast, there had been a long-established Hispanic, Catholic and missionary presence in the United States, which began with the foundation, in 1565, of San Agustín, in Florida, the oldest municipality in the United States, under constant siege. 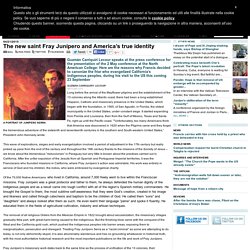 It started expanding from Florida and Louisiana, then from the Gulf of Mexico, Texas and Santa Fe, right up until the Pacific coast. “"Unfortunately, too many Americans think that America was discovered in 1620 when the Pilgrims came and they forget the tremendous adventure of the sixteenth and seventeenth centuries in the southern and South-western United States,” President John Kennedy wrote. Which Songs on Pope Francis’s Album Will Be Hit Singles? Jeb Bush on Pope Francis’s Calls to Fight Climate Change: “He’s Not a. Now that Pope Francis is in the middle of his weeklong sweep through the United States—and now that he has spoken in front of Congress—it is time for the inevitable bending of Pope Francis’s words toward one’s political agenda. 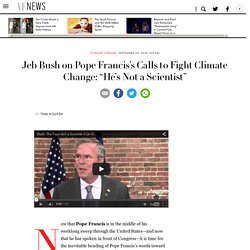 As Jeb Bush demonstrates, however, it’s also possible for a Catholic presidential candidate to bat away the Pope’s concerns. In a presser outside a campaign stop in Virginia, Bush, who saw Pope Francis when he went through D.C., dismissed Francis’s call for action against climate change, saying that the Pope was “not a scientist, he's a religious leader.” During his speech to Congress, Francis, who wrote a groundbreaking encyclical equating the fight against climate change with a moral imperative, urged the legislative body to work together against the “environmental deterioration caused by human activity.” Bush dismissed the Pope’s words. Bush and his fellow Republican presidential candidate Sen. On Being with Krista Tippett — The Big Questions of Meaning. Long Beach convent&apos;s reopening helps boost the shrinking ranks of nuns.

This summer, Silvana Arevalo put aside her life in San Francisco — a successful career as a chemical engineer, a great salary and lots of friends — and headed to a quiet place outside the city in search of an answer to a question that few women ask these days: Should I become a nun? 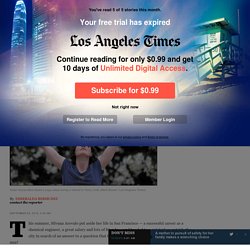 Since the 1950s, there has been a sharp decline of women willing to take the vows of chastity, poverty and obedience required by the Catholic Church. As lay people moved in to run Catholic hospitals, schools and charities, the number of nuns fell from 180,000 in 1965 to about 50,000 in 2014, according to Georgetown University's Center for Applied Research in the Apostolate. Many, nowadays, see becoming a nun as "a tremendous, radical choice, " said Paul Bednarczyk, executive director of the National Religious Vocation Conference, a Chicago-based organization that provides resources and training for faith-related careers. "People ask, 'How can you do this when you have so many other choices?

' " he said. Pope stirs excitement in D.C., calls for climate action. WASHINGTON — Cheered by jubilant crowds across the nation’s capital, Pope Francis forged common cause Wednesday with President Barack Obama on climate change, immigration and inequality, as the popular pontiff signaled he would not sidestep issues that have deeply divided Americans. 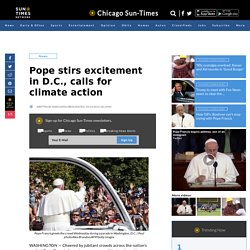 Republican candidates defy founders on religion - Wednesday, Sept. 23, 2015. This nation’s founders recognized Islam as one of the world’s great faiths. 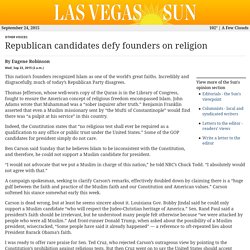 Incredibly and disgracefully, much of today’s Republican Party disagrees. Thomas Jefferson, whose well-worn copy of the Quran is in the Library of Congress, fought to ensure the American concept of religious freedom encompassed Islam. John Adams wrote that Muhammad was a “sober inquirer after truth.” Benjamin Franklin asserted that even a Muslim missionary sent by “the Mufti of Constantinople” would find there was “a pulpit at his service” in this country. Indeed, the Constitution states that “no religious test shall ever be required as a qualification to any office or public trust under the United States.”

Ben Carson said Sunday that he believes Islam to be inconsistent with the Constitution, and therefore, he could not support a Muslim candidate for president. “I would not advocate that we put a Muslim in charge of this nation,” he told NBC’s Chuck Todd. I was ready to offer rare praise for Sen. Back to top.

Related:  The Greedy Old Party   -  Data Media/Journalism   -  Crucial Conversations   -  How Can We Talk? About What Is Essential?   -  Media Literacy Resources   -  US   -  RESIST the Orange Sphincter !   -  Media and Manipulation   -  On Being with Krista Tippett — The Big Questions of Meaning   -  Education   -  Enterprise