Back to the Bible - Home 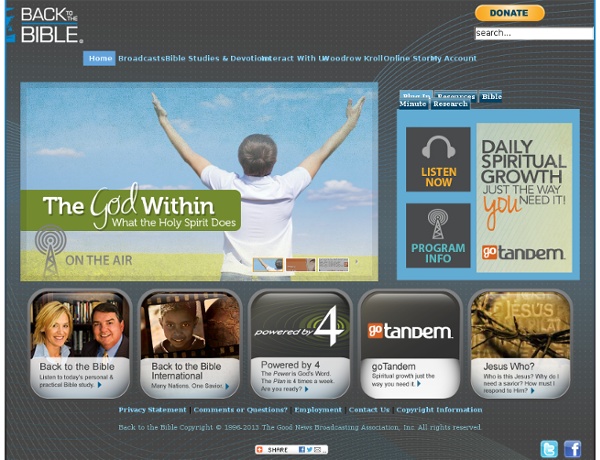 Coexist? « Wiser Time I don’t know what’s sadder about this – that your depictions of the conflicts between these groups is so misguided, or that you would, as a Christian, take the position that the peaceful coexistence of religions is somehow a bad idea. To begin with: C is bound by the Koran to honor the religions of the book – at the very least, T and X. Some don’t, but most do; you’re far better off being T or X than atheist in most muslim nations. The conflict between X and C is not a religious conflict; it is a political conflict over the state of Israel. C has no beef with T either, though some C individuals, as well as some muslim states, have a conflict with America (which is in no sense a representative of T) over our unwavering support X when X commits grievous acts against some members of C.

Bible Commentary - 1 John 1, 2, 3, 4, 5 For New King James text and comment, click here. I John 1-5 Listen An introduction to I John While not specifically identified, hints in this book tell us that the author was the Apostle John, the son of Zebedee. There is no way to fix the date of the writing of this letter. Opinions by scholars vary from as early as 55 A.D. to as late as 90 A.D. Theology An Introduction to the Doctrines of the Christian Faith The pages listed below were written seeking to accurately express the teaching of the Bible on each subject in an "introduction and overview" format. As such, each study begins with a detailed summary of the teaching outlined below, and a listing of related studies is included so that you can follow from one study logically onto another. The Bible on God: (top) The Bible on Mankind: (top)

The 100 most-read Bible verses at BibleGateway.com What are the most popular Bible verses on BibleGateway.com? We thought it would be interesting to find out, so we crunched some numbers from a (relatively) small sample of 25 million Bible passage searches from March and April. This list isn’t actually based on a straight popularity count; simply tallying the most-read verses results in a top 100 list that consists almost entirely of John 3:16 and verses from 1 Corinthians 13, Genesis 1, Romans 8, and Psalm 23. Our list instead considers instances in which BibleGateway.com users looked at three or fewer verses at one time.

Top 10 Free Ways To Discover New Music Online – Eternal Code [via makeuseof.com] Bored with your music and want to discover some new bands or singers? There are two main ways you can do that online. 'Glo' Digital Bible Answers: What Would Jesus Click? Call it Bible 2.0: Glo, a "Bible for a digital world," goes on sale today for $90. Function-wise, it's analogous to DVD-based digital encyclopedias. The NIV text is linked with more than 500 360-degree panoramas of holy sites, 7,500 encyclopedia articles, 2,400 photos, 700 pieces of art, and 3.5 hours of HD video. Created by Nelson Saba, a former VP of tech at Citibank, and Phil Chen, whose family owns HTC, Glo is intended to keep the Bible relevant in an age where reading books is becoming almost anachronistic. As the video trailer says, "Instead of just reading the bible, you see it.

The Hebrew Name for God - Elohim The name Elohim is unique to Hebraic thinking: it occurs only in Hebrew and in no other ancient Semitic language. The masculine plural ending does not mean “gods” when referring to the true God of Israel, since the name is mainly used with singular verb forms and with adjectives and pronouns in the singular (e.g., see Gen. 1:26). However, considering the Hashalush HaKadosh (Trinity), the form indeed allows for the plurality within the Godhead. In the traditional Jewish view, Elohim is the Name of God as the Creator and Judge of the universe (Gen 1:1-2:4a).