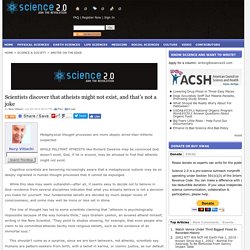 Cognitive scientists are becoming increasingly aware that a metaphysical outlook may be so deeply ingrained in human thought processes that it cannot be expunged. While this idea may seem outlandish—after all, it seems easy to decide not to believe in God—evidence from several disciplines indicates that what you actually believe is not a decision you make for yourself. Your fundamental beliefs are decided by much deeper levels of consciousness, and some may well be more or less set in stone.

What, Indeed, Is the Quran? Most people know that the Quran (Qur’an, Koran) is the holy book of the Muslim religion, hence of about a fifth of the world’s population. 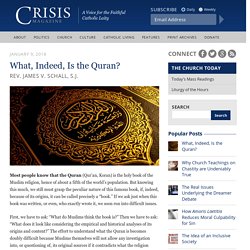 But knowing this much, we still must grasp the peculiar nature of this famous book, if, indeed, because of its origins, it can be called precisely a “book.” If we ask just when this book was written, or even, who exactly wrote it, we soon run into difficult issues. First, we have to ask: “What do Muslims think the book is?” Then we have to ask: “What does it look like considering the empirical and historical analyses of its origins and content?”

The Poignant but Triumphant Story of the Yugoslavian Nun Who Was Raped – EpicPew. Particularly inspiring in this Year of Mercy, here is an extraordinary letter written by a young nun, Sister Lucy Vertrusc, to her mother superior. 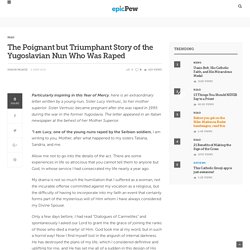 Must See Interview of Christian Children in Iraq. The Four Hooks On Which Bergoglio Hangs His Thought. They have been his guiding criteria ever since he was young. 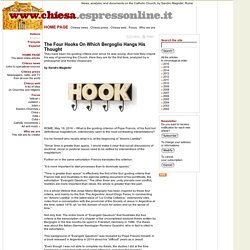 Laudare, Benedicere, Praedicare: Official Hymn of the Jubilee of the Order of Preachers. In the Absence of a Shepherd. Portrait of a Jesuit High School Midway through the last century Loyola Academy was relocated from the neighborhood of Rogers Park (where it was founded in 1909) to a newly constructed campus in the prosperous and insular North Shore, just outside Chicago. 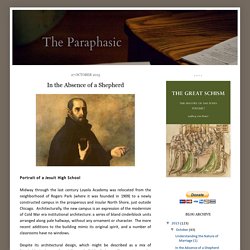 11 Traditional Catholic Diagrams of the Faith from a Bygone Era. Joseph Sciambra: How Our Lord Jesus Christ Saved Me From Homosexuality, Pornography, and the Occult: The real reason why “gay” men leave the Catholic Church… Earlier this year, “gay Catholic” Joseph Prever remarked that he had a problem with some of the language surrounding homosexuality in the Catholic Church: “Many of us emphasize the need to move towards self-acceptance and away from shame.

For this reason we often stay away from the language of ‘disorder’ and ‘brokenness’ that often surrounds the issue…” Recently, Ron Belgau of “Spiritual Friendship” had this to say about the word “disordered“ and its apparent effect on those who may hear it: “There’s a place for that. Present-day culture doesn’t understand the philosophical framework of the catechism, and often interprets it, falsely, with a psychological lens, which makes it sound less-than-merciful.” 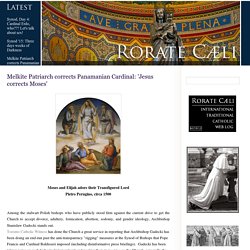 Toronto Catholic Witness has done the Church a great service in reporting that Archbishop Gadecki has been doing an end-run past the anti-transparency "rigging" measures at the Synod of Bishops that Pope Francis and Cardinal Baldisseri imposed (including disinformative press briefings). Gadecki has been taking notes on each bishop's "intervention" and posting them to his blog so the Church, especially the Polish Church, will be informed of what is really going on at the synod. Thanks to Abp. Lacunza was quoted by Gadecki as follows: "Moses drew near to the people and gave way. Moses "drew near to the people and gave way"? Blessed Marcel Callo: The nerd's alternative to Pier Giorgio - Denver Catholic. Blessed Marcel Callo just needs to be more famous. 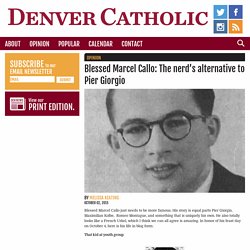 His story is equal parts Pier Giorgio, Maximilian Kolbe, Romeo Montague, and something that is uniquely his own. He also totally looks like a French Urkel, which I think we can all agree is amazing. In honor of his feast day on October 4, here is his life in blog form: That kid at youth group Marcel as a Boy Scout. ThoseCatholicMen. Pulcina - Coffee machines Alessi. "What is Truth?" Said the Scientist to the Theologian. Last night I dreamt that I was judge, prosecutor, defense attorney and defendant in a trial about my conversion to the Catholic faith. 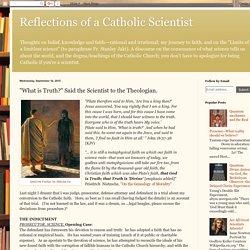 Here, as best as I can recall (having fudged the details) is an account of that trial. (I'm not learned in the law, and it was a dream, so ...legal beagles, please excuse the deviations from procedure.)* The defendant has foresworn his devotion to reason and truth: he has adopted a faith that has no rational or empirical basis. This Communist Abortionist Turned Pro-Life After a Saint Visited Him in a Dream. The Spanish daily “La Razon” has published an article on the pro-life conversion of a former “champion of abortion.” 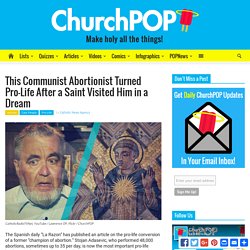 Stojan Adasevic, who performed 48,000 abortions, sometimes up to 35 per day, is now the most important pro-life leader in Serbia, after 26 years as the most renowned abortion doctor in the country. “The medical textbooks of the Communist regime said abortion was simply the removal of a blob of tissue,” the newspaper reported.

“Ultrasounds allowing the fetus to be seen did not arrive until the 80s, but they did not change his opinion. Nevertheless, he began to have nightmares.” [See also: Exorcising a Former Abortion Clinic: An Eye-Opening True Story] Cardinal Ottaviani on the Third Secret of Fatima : Catholic Stand. In light of continued controversy over Fatima and its famous third secret, I am presenting my own amateur translation of an Allocution (Address) of Alfredo Cardinal Ottaviani on said secret. The Cardinal’s Allocution has great weight in the controversy over the third part of the secret.

It is said that Ottaviani, in the following Allocution, stated that the third part of the secret contained about 25 lines of text. This is as opposed to the 60+ lines released by the Vatican on June 26, 2000. The following translation demonstrates the Cardinal never commented on the number of lines of text. The Tragedy of Thomas Merton. THE TRAGEDY OF THOMAS MERTON - Part II Hodie, si vocem ejus audieritis, nolite obdurare corda vestra, sicut in exacerbatione, secundum diem tentationis in deserto: ubi tentaverunt me patres vestri, probaverunt et viderunt opera mea.

Download this document as a It is matter that impedes knowledge. The Tragedy of Thomas Merton. THE TRAGEDY OF THOMAS MERTON Part I “The quietness and hiddenness and placidity of the truly good people in the world all proclaim the glory of God. We refuse to hear the million different voices through which God speaks to us, and every refusal hardens us more and more against His grace—and yet He continues to speak to us: and we say He is without mercy!

… Glorious Mother of God, shall I ever again distrust you? Shall I ever look anywhere else but in the face of your love, to find out true counsel, and to know my way, in all the days and all the moments of my life?” Thomas Merton Download this document as a. 400 Years Ago, Our Lady Sent Us A Message From Ecuador - OnePeterFive. Statue of Our Lady of Good Success, Quito, Ecuador I spent a lovely weekend with my family, and have mostly avoided the news. This morning I awoke to a story about Pope Francis making a surprise public appearance in Quito, Ecuador, where he is beginning a tour of three Latin American countries. The Top Dominican Websites and Blogs. The issue: Looking for Dominican websites and 90% of your search results have something to do with the Dominican Republic The solution: This post.

I have been scouring the inter-webs looking for updated OP websites with quality content, and here is what I have found thus far. I KNOW I have not found them all. The Latin Mass: Why You Can’t Have It. Roberto de Mattei double-post: "Meltdown of the Church" and A Response: "The Process that has led us to the New Modernists" The SSPX and the Hermeneutic of Continuity: A Report from the SSPX "Convegno" in Rimini. Contra Zmirak: In Praise of the Inquisition. ADDRESS OF HIS HOLINESS BENEDICT XVI ON THE OCCASION OF CHRISTMAS GREETINGS TO THE ROMAN CURIA 12/21/2012. Jewish Attitudes Towards Sexuality. Note: This page addresses issues of Jewish law that may not be appropriate for younger readers. In places, it discusses sexual behavior in plain and frank terms. The Mystery of Ethiopian Iconography. Historia del rosario. Entre las devociones con que el pueblo cristiano honra a la Virgen María sobresale el santo rosario; es la reina de las devociones marianas.

Return to Rome: Confessions of an Evangelical Catholic. Francis Gives the Church and Humanity a Chance. What does the Church teach about Tattoos? : matt fradd. Video John XXIII's Secretary part 2. Literary Critics Examine the New Testament. The Unreasonableness of Atheism. Synodical secrecy (2) How Do We Know the Early Church? - Dr. William Marshner. The Neo-Modernist Theology of Eberhard Schockenhoff. Interview of Cardinal Siri by Fr. Walter Abbot, S.J.

Vatican II Followed Ottaviani on Church and State - Crisis Magazine. My Answers To Questions About Gay "Marriage" : Catholic Stand. Vatican Radio - Pope Benedict's last great master class: Vatican II, as I s. Why are there so many NFP methods? Are Catholics Supposed to Abstain from Meat Every Friday? 20 Tips from Padre Pio for Those Who Are Suffering. John Gray: Steven Pinker is wrong about violence and war. New Proofs for the Existence of God: Contributions of Contemporary Physics and Philosophy. Challenging the Rehabilitation of Pierre Teilhard de Chardin. Some thoughts on the five stages of religious persecution. - Community in Mission : Community in Mission.