Symbolisim. Creationism. Today, the American Scientific Affiliation, a prominent religious organisation in the United States, recognizes that there are different opinions among creationists on the method of creation, while acknowledging unity on the Abrahamic belief that God "created the universe. 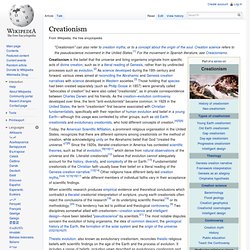 "[7][8] Since the 1920s, literalist creationism in America has contested scientific theories, such as that of evolution,[9][10][11] which derive from natural observations of the universe and life. Literalist creationists[12] believe that evolution cannot adequately account for the history, diversity, and complexity of life on Earth.[13] Fundamentalist creationists of the Christian faith usually base their belief on a literal reading of the Genesis creation narrative.[12][14] Other religions have different deity-led creation myths,[note 1][15][16][17] while different members of individual faiths vary in their acceptance of scientific findings. History[edit] Early and medieval times[edit] The Atheist’s Guide to Reality: An Interview with Alex Rosenberg. Reality, notes philosopher Alex Rosenberg, is “completely different from what most people think… stranger than even many atheists recognize.” 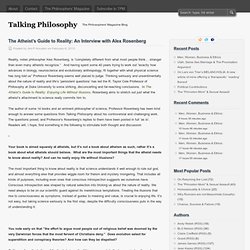 And having spent some 40 years trying to work out “exactly how advances in biology, neuroscience and evolutionary anthropology, fit together with what physical science has long told us” Professor Rosenberg seems well placed to judge. Thinking seriously and unsentimentally about the nature of reality and life’s ‘persistent questions’ has led the R. Taylor Cole Professor of Philosophy at Duke University to some striking, disconcerting and far-reaching conclusions. In The Atheist’s Guide to Reality: Enjoying Life Without Illusions, Rosenberg aims to stretch out just what the atheist’s attachment to science really commits him to.

The author of some 14 books and an eminent philosopher of science, Professor Rosenberg has been kind enough to answer some questions from Talking Philosophy about his controversial and challenging work. Introspection? No. A Common Faith. Marilynne Robinson looks to the stars for clues about our nature. 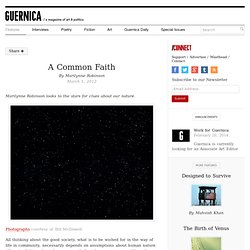 Photographs courtesy of Bill McDowell All thinking about the good society, what is to be wished for in the way of life in community, necessarily depends on assumptions about human nature. All sorts of things have been assumed about human nature, and have been found persuasive or at least have been accepted as true over the course of history.

Religion in the 21st century. Once upon a time religion was in the world and made the world. 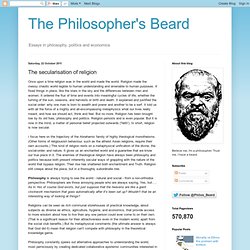 Religion made the messy chaotic world legible to human understanding and amenable to human purposes. It fixed things in place, like the stars in the sky and the differences between men and women. It ordered the flux of time and events into meaningful cycles of life, whether the turning of the sun, seasons, and harvests or birth and death. It explained and justified the social order: why one man is born to wealth and power and another to be a serf. It told us with all the force of a mighty and all-encompassing metaphysics what our lives really meant, and how we should act, think and feel. Philosophy is always trying to see the world - natural and social - from a non-orthodox perspective. Philosophy constantly spews out alternative approaches to understanding the world, most perniciously by creating dedicated collaborative epistemic communities interested in particular subjects - previously.

Individualisation Marketisation. Does God exist? Ten years ago, I began attending monthly meetings of a small group of scientists, actors and playwrights in a carpeted seminar room at the Massachusetts Institute of Technology. 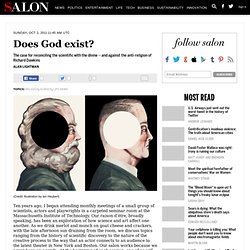 Our raison d’être, broadly speaking, has been an exploration of how science and art affect one another. As we drink merlot and munch on goat cheese and crackers, with the late afternoon sun draining from the room, we discuss topics ranging from the history of scientific discovery to the nature of the creative process to the way that an actor connects to an audience to the latest theater in New York and Boston. Our salon works because we never have an agenda. At the beginning of each session, one of us will begin talking about some random idea, another person will chime in or change the subject, and miraculously, after 20 minutes, we find that we have zeroed in on a question that everyone is passionate about.

Next, a working definition of God. But the situation is more complex than that. Religion. Analytical thinking erodes belief in God - science-in-society - 26 April 2012. Charles Darwin and Albert Einstein famously did not believe in a supernatural God, and neither do some scientists today. 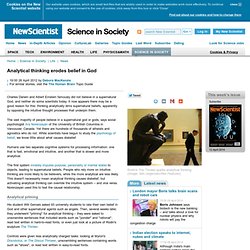 It now appears there may be a good reason for this: thinking analytically dims supernatural beliefs, apparently by opposing the intuitive thought processes that underpin them. The vast majority of people believe in a supernatural god or gods, says social psychologist Ara Norenzayan of the University of British Columbia in Vancouver, Canada. Yet there are hundreds of thousands of atheists and agnostics who do not. While scientists have begun to study the psychology of belief, we know little about what causes disbelief.

Humans use two separate cognitive systems for processing information: one that is fast, emotional and intuitive, and another that is slower and more analytical. The first system innately imputes purpose, personality or mental states to objects, leading to supernatural beliefs. Analytical priming Journal reference: Science, DOI: 10.1126/science.1215647.