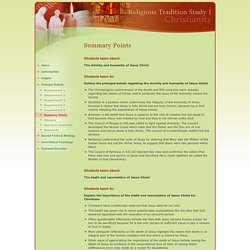 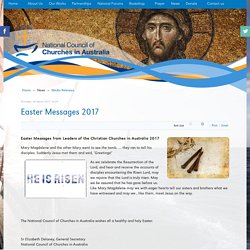 Suddenly Jesus met them and said, ‘Greetings!’ What is Christianity? The Basics. Everyone who asks the question "what is christianity? 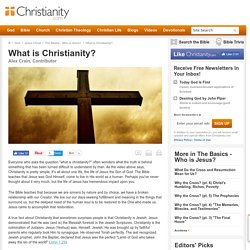 " often wonders what the truth is behind something that has been turned difficult to understand by man. As the video above says, Christianity is pretty simple. Christianity – General. OriginsChristianity is the religion based on the life, death and teachings of Jesus of Nazareth, also known as the Christ or Messiah. 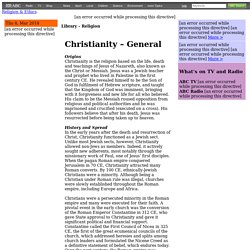 Jesus was a Jewish teacher and prophet who lived in Palestine in the first century CE. He revealed himself to be the Son of God in fulfilment of Hebrew scripture, and taught that the Kingdom of God was imminent, bringing with it forgiveness and new life for all who believed. His claim to be the Messiah roused opposition from religious and political authorities and he was imprisoned and crucified (executed on a cross).

His followers believe that after his death, Jesus was resurrected before being taken up to heaven. Why is the Resurrection so Important? by Randy Alcorn. In the late 1990s, a group of scholars assembled to evaluate whether Jesus actually said the things attributed to him by the Gospel writers. 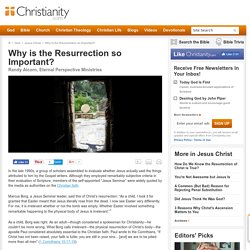 Although they employed remarkably subjective criteria in their evaluation of Scripture, members of the self-appointed “Jesus Seminar” were widely quoted by the media as authorities on the Christian faith. Marcus Borg, a Jesus Seminar leader, said this of Christ’s resurrection: “As a child, I took it for granted that Easter meant that Jesus literally rose from the dead. I now see Easter very differently. For me, it is irrelevant whether or not the tomb was empty. Whether Easter involved something remarkable happening to the physical body of Jesus is irrelevant.”1 As a child, Borg was right. God’s love in action – the death and resurrection of Jesus Christ. Without The Resurrection Of Jesus Christ, There Is No Christian Faith. Few years back, I was walking close to my home in Massachusetts Avenue in Cambridge, Massachusetts, I stumbled and fell down. 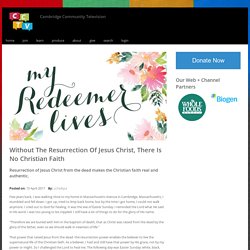 I got up, tried to limp back home, but by the time I got home, I could not walk anymore. I cried out to God for healing. It was the eve of Easter Sunday. I reminded the Lord what He said in His word. I was too young to be crippled. How Important Is The Resurrection To Christianity? The resurrection of Jesus Christ is the central truth of the Christian faith. 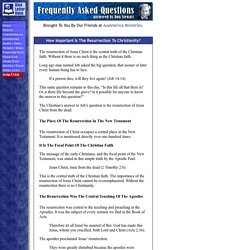 Without it there is no such thing as the Christian faith. Long ago man named Job asked the big question, that sooner or later every human being has to face. If a person dies, will they live again? (Job 14:14). This same question remains to this day, “Is this life all that there is? Death and Resurrection of Jesus. As Jesus traveled and preached, he angered the Roman rulers, who feared that he was provoking unrest among the people and planning a revolution. 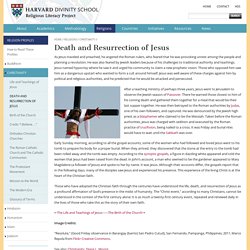 He was also feared by Jewish leaders because of his challenges to traditional authority and teachings. Jesus named hypocrisy where he saw it and urged his community to claim a new prophetic vision. Those who opposed him saw him as a dangerous upstart who wanted to form a cult around himself. Jesus was well aware of these charges against him by political and religious authorities, and he predicted that he would be attacked and persecuted.

JESUS CHRIST IN HISTORY AND TRADITION. Having surveyed the New Testament understanding and experience of the historical and risen Jesus, it would be tempting to by-pass the history of the ways in which Jesus Christ has been interpreted in order to bring the Christ mystery into immediate dialogue with our contemporary situation. 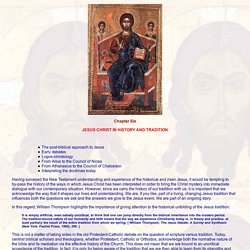 However, since we carry the history of our tradition with us, it is important that we acknowedge the way that it shapes our lives and understanding. We are, if you like, part of a living, changing Jesus tradition that influences both the questions we ask and the answers we give to the Jesus event. We are part of an ongoing story. What difference should the resurrection make for us as Christians? by Sam Allberry. Why is the resurrection of Jesus significant? by Sam Allberry.

The Atoning Saviour: (1) Sacrifice* - The Gospel Coalition Australia. There are few more debated topics in the church today than the person and work of the atoning Saviour, and few topics on which there are such divergent views. 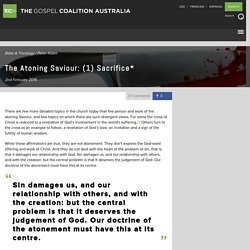 For some the cross of Christ is reduced to a revelation of God’s involvement in the world's suffering.[1] Others turn to the cross as an example to follow, a revelation of God’s love, an invitation and a sign of the futility of human wisdom. While these affirmations are true, they are not atonement. The Atoning Saviour: (2) The Passover Lamb* - The Gospel Coalition Australia.

In our first post we examined the way Christ fulfils the Old Testament idea of Sacrifice through his death on the cross. This week we will look at the idea of the Passover Lamb. In its original context the Passover brings together God's judgement, salvation and victory. The Passover is first an act of judgment: both against the sin of Pharoah for refusing to release the Israelites; and also against the false gods of Egypt: Two natures of Jesus. The two natures of Jesus refers to the doctrine that the one person Jesus Christ had/has two natures, divine and human. In theology this is called the doctrine of the hypostatic union, from the Greek word hypostasis (which came to mean substantive reality). Early church figures such as Athanasius used the term "hypostatic union" to describe the teaching that these two distinct natures (divine and human) co-existed substantively and in reality in the single person of Jesus Christ. The aim was to defend the doctrine that Jesus was simultaneously truly God and truly man.

Historical development. Witnessing the Resurrection – Home – Moore Theological College. As the season of Easter has come and gone we may often feel disappointed and overwhelmed by the crass commercialism and blatant trivialisation of this sacred Christian celebration. How and when did Easter bunnies begin to dominate the discourse in Australia? The Divinity of Christ. Skip to main content. Christian Beliefs about Salvation. Need for Salvation: Sin and Death In Christianity, salvation is made possible by the sacrificial death of Jesus Christ by crucifixion 2,000 years ago. 2011 Human Holy And Divine Lars Lydholm.

Greek Orthodox Metropolis of Toronto (Canada) The Holy Scriptures speak of the divine nature and divinity of Christ in many places, but we will refer to only a few. Let us begin with Thomas, who had doubted His divine nature. However, in John, 20:28, Thomas proclaims without any reservations or doubt, “My Lord and my God!” Christ is Lord and God. Lesson - Jesus: Divinity, Humanity and Mission. Exercising the compassion of - World Vision Australia. Jesus, the Centre of Christianity. The Deity of Christ – Home – Moore Theological College. In what follows I ll attempt to answer two questions. GCSE Bitesize: General and special revelation. BBC Bitesize - GCSE Religious Studies - Revelation - Revision 4. Faith, Revelation and the Limits of the Christian Imagination – Opinion – ABC Religion & Ethics. Internationally acclaimed Australian poet, theologian and philosopher Kevin Hart presented the following lecture to the Centre for the Study of Science, Religion and Society, Emmanuel College, the University of Queensland, addressing the question: "Does a belief in revelation impose severe limitations on the creative freedom of Christian artists?

" This question is very rich in concepts and assumptions, and these must be plucked from the question and individually examined in some detail before the question can be answered, even in a preliminary way. Revelation and Inspiration of Scripture. Dennis Bratcher. Revelation, Inspiration, Illumination - Tim Challies. There is a sense in which this blog is, for lack of a better word, living or dynamic. What I mean is that I sometimes write articles and return to them a year or two later and post them again, but only after refining them. As my understanding of various topics increases, I find myself drawn back to certain topics, wanting to improve upon and add to what I wrote in the past.

I expect this cycle to continue so that as the years go by, a small number of articles may be improved upon several times over. A couple of years ago I wrote about three related terms: revelation, inspiration and illumination. Today I’d like to briefly revisit those terms for they are critical concepts for Christians to understand. The Doctrine of Revelation: How God Reveals His Nature and His Will. Catechism of the Catholic Church - The Revelation of God. 52 God, who "dwells in unapproachable light", wants to communicate his own divine life to the men he freely created, in order to adopt them as his sons in his only-begotten Son.3 By revealing himself God wishes to make them capable of responding to him, and of knowing him and of loving him far beyond their own natural capacity.