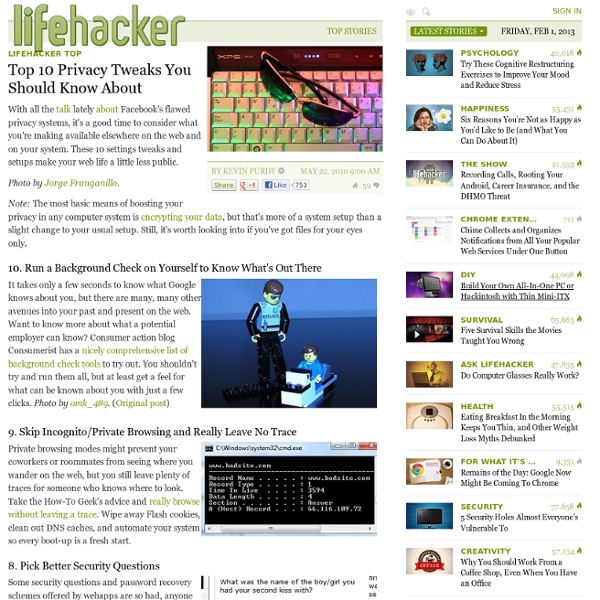 How to be anonymous online with Incognito At first glance Incognito may seem suited only for the extremely paranoid, because of the totality of tools it offers to hide your online presence. But those tools, each designed to mask a certain aspect of your online activity, have been around for quite a while. This 430MB-ish live CD has many faithful users, but I can't quote any on its usefulness since their identities couldn't be confirmed. Yes, Incognito is that good. If you're looking for the ultimate way to encrypt absolutely all your internet communications and be untraceable on the internet, you're looking for Incognito. Whether you're an anarchist, a covert operative or just someone who wants to exercise their digital rights and hide your online activity, with Incognito you can encrypt your IM conversations and emails, browse securely without the fear of cookies and the browser history revealing your secrets, and best of all, the traffic doesn't reflect in your router logs. An aside: who wants to be anonymous? Buck the trend.

Stealing Your Address Book by Dustin Curtis It’s not really a secret, per se, but there’s a quiet understanding among many iOS app developers that it is acceptable to send a user’s entire address book, without their permission, to remote servers and then store it for future reference. It’s common practice, and many companies likely have your address book stored in their database. Obviously, there are lots of awesome things apps can do with this data to vastly improve user experience. But it is also a breach of trust and an invasion of privacy. I did a quick survey of 15 developers of popular iOS apps, and 13 of them told me they have a contacts database with millons of records. One company’s database has Mark Zuckerberg’s cell phone number, Larry Ellison’s home phone number and Bill Gates' cell phone number. There are two major questions to ask about this behavior: First, why does Apple allow iOS apps to access a user’s entire address book, at any time, without permission? There was similar outrage last year, when Kik was outed.

Without a Trace: Turn Your Flash Drive into a Portable Privacy Toolkit @parabellum2000: Here, Here! While I might get frustrated from time to time with the limitations of web access at my school (I have to download a YouTube video from home and bring it in if I want to use it in a lesson), I understand why they exist and, frankly, I work too hard and too much to have time to putz around with tunneling through the firewall. Not to mention that I like my job, I like the IT guys, and they know I know what I'm doing. I wouldn't be surprised, if a student set up a SSH tunnel on a library computer, if they came to me to ask if I knew anything about it. Even when I worked behind a desk entering orders all day, there were ways to make it more interesting, and I was able to keep myself busy adding value for the company. (That is, after all, what they pay me for.) You want to play your own music in your office? @tchrman35: A CD Player?

Facebook working on &#039;simple&#039; privacy settings | Politics and Law After one of the most tumultuous months in its young history, Facebook is planning to announce features intended to offer its hundreds of millions of users simpler privacy choices. The last few weeks have not been kind to the Internet's second most popular Web site, which has been pilloried by privacy activists and slammed by some members of Congress. The flap has spawned clever interactive graphics showing how Facebook has gradually exposed more user data, tools to fix your privacy settings, and reports of internal discord among employees who may fear that the negative attention would jeopardize a lucrative public stock offering. A Facebook spokesman on Friday confirmed that the changes will arrive "shortly," without elaborating. "The messages we've received are pretty clear," Andrew Noyes said. "Users appreciate having precise and comprehensive controls, but want them to be simpler and easier to use. The danger here lies, as it often does, in regulatory overreach.

10 Incredibly Awesome Documents to Help You Start a Company Non Disclosure Agreement (NDA) – these are over-hyped in my opinion and few angel or venture investors will sign them, but always helpful to have one handy to bust out at parties. LLC Operating Agreement – I put my first LLC together myself using this agreement. My advice is to hire an attorney, but if you don’t listen to advice so well, knock yourself out. Sample Convertible Note – A convertible note is a way to raise debt for your company that will convert into equity. When you are first raising money, if you can use a convertible note instead of having to give up shares/equity, you’ll usually be in a better position later on and own more of your company. Board of Advisor Agreement – A good board of advisor can be worth their weight in gold, a bad one can be worth their weight in radioactive fluid. Financial Projections Template – This document is “da bomb”. Financial Model Projections for an Internet Company – Big shout out to Brian Garrett of Crosscut Ventures (site coming soon).

Low-Hassle Ways to Secure Your Computer System If time were no object, we’d all live a more secure computer life—we’d beef up our browsers, use complex passwords, and keep our data locked up with encryption Skynet couldn’t crack. But that kind of stuff requires obscure software, tricky command line work, and most of a free weekend, right? Nope. Anybody can feel more secure about their systems with the help of some free software and easy tweaks and add-ons. We’ve rounded up a good deal of these swift and simple security fixes for Windows, Mac, and Linux, so bust out the tinfoil hats and check ‘em out after the jump. Photo by ul Marga. Lock Down Firefox Firefox is pretty secure in its own right, but its vast library of add-ons include a number of tools that can make it even tighter. Take some of Adam’s advice and set Firefox to erase your private data on exit, stop keeping “address bar history,” and enable a master password if you don’t want to remember your legion of site logins. Encryption made easy Make strong but memorable passwords

Tracking the Trackers: Where Everybody Knows Your Username Click the local Home Depot ad and your email address gets handed to a dozen companies monitoring you. Your web browsing, past, present, and future, is now associated with your identity. Swap photos with friends on Photobucket and clue a couple dozen more into your username. Keep tabs on your favorite teams with Bleacher Report and you pass your full name to a dozen again. This isn't a 1984-esque scaremongering hypothetical. [Update 10/11: Since several readers have asked – this study was funded exclusively by Stanford University and research grants to the Stanford Security Lab. Background on Third-Party Web Tracking and Anonymity In a post on the Stanford CIS blog two months ago, Arvind Narayanan explained how third-party web tracking is not at all anonymous. In the language of computer science, clickstreams – browsing histories that companies collect – are not anonymous at all; rather, they are pseudonymous. A third party is also a first party, e.g. Web Information Leakage Methodology

Three Cool Tools for Restoring Your Facebook Privacy - PCWorld Well, it seems all this complaining about Facebook’s laissez faire attitude toward its users’ privacy has finally gotten their attention. According to published reports, the company called an “all hands meeting” to discuss the controversy last week. And what has come of that meeting? Apparently a lot of soul searching, rending of garments, and gnashing of teeth, per a report in the Wall Street Journal. So leave it to some clever entrepreneurs to do what Facebook has so far refused to do: Put back the privacy protections Facebook just took away. First up, there’s ReclaimPrivacy, which can scan your Facebook settings and let you know where you’re at risk. Of course, Scan for Privacy leaves it up to you to decide how to change your settings.

Five Best File Encryption Tools File encryption is your best bet if you want to keep The Man, foreign spies, or your annoying roommates out of your files. Here’s a look at five of the most popular encryption tools Lifehacker readers use to lock down their files. Image a composite of photos by Anonymous Account and flaivoloka. GNU Privacy Guard (Windows/Mac/Linux, Free) GNU Privacy Guard (GnuPG) is an open-source implementation of the the famed Pretty Good Privacy (PGP) encryption tool—you can read the very interesting history of PGP and how GnuPG came to be here. Disk Utility (Mac, Free) Disk Utility is a diverse tool that handles almost any disk-related tasks you’d need on OS X. TrueCrypt (Windows/Mac/Linux, Free) TrueCrypt is a free, powerful and on-the-fly disk encryption tool. 7-zip (Windows, Free) AxCrypt (Windows, Free) AxCrypt is a free encryption tool for Windows. If you’ve got experience with any of these tools, let’s hear more about what makes it your tool-of-choice in the comments.

Hundreds of websites share usernames sans permission High performance access to file storage Home Depot, The Wall Street Journal, Photobucket, and hundreds of other websites share visitor's names, usernames, or other personal information with advertisers or other third parties, often without disclosing the practice in privacy policies, academic researchers said. Sixty-one percent of websites tested by researchers from Stanford Law School's Center for Internet and Society leaked the personal information, sometimes to dozens of third-party partners. Home Depot, for example, disclosed the first names and email addresses of visitors who clicked on an ad to 13 companies. The report comes as US officials have proposed a mandatory Do Not Track option for all websites. In the report, Jonathan Mayer, a Stanford graduate student who led the study, argued against the claim that the online tracking is anonymous. “We believe there is now overwhelming evidence that third-party web tracking is not anonymous,” he wrote.

FreedomBox Foundation Why Facebook Must Get Serious About Privacy Dallas Lawrence is Managing Director of Burson-Marsteller’s Proof Integrated Communications. He is a Mashable contributor on emerging media trends, online reputation management and digital issue advocacy. You can connect with him on Twitter @dallaslawrence. The recent firestorm over Facebook’s approach to securing the privacy of its more than 450 million users continues to reverberate around the globe this week as thousands of news outlets cover the unfolding drama with almost breathless zeitgeist. And while traditional outlets are grappling with what it all means for the future of Facebook, online denizens have trumpeted their angst about the company’s most recent changes with more than 25 million blog posts. The current crisis of confidence leveled against Facebook once again centers on the core issue of how the social networking platform manages access to its users' information. The Lessons Facebook Can Learn from Google Transparency is Key to Facebook's Maturation