5 Shocking Ways The World Is About To Change. First off, fuck the apocalypse and everybody who predicts it. 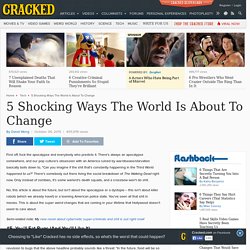 There's always an apocalypse somewhere, and our pop culture's obsession with an America ruined by war/disease/starvation basically boils down to, "Can you imagine if the shit that's constantly happening in the Third World happened to us? " There's somebody out there living the social breakdown of The Walking Dead right now. Only instead of zombies, it's some warlord's death squads, and a crossbow won't do shit. No, this article is about the future, but isn't about the apocalypse or a dystopia -- this isn't about killer robots (which we already have!)

Or a looming American police state. Semi-related note: My new novel about cybernetic super-criminals and shit is out right now! #5. Segmed87ru/iStock/Getty Images If you found a cockroach in your cereal, your whole year would be ruined. Chad Zuber/iStock/Getty Images"I wish my kids were here to witness this, but I ate them out of desperation first. " via webexhibits.org. How Companies Learn Your Secrets. Privacy Post-Privacy. Www.privacyistheenemy.com. Single Point of Failure: The Day Google Forgot To Check Passwords. 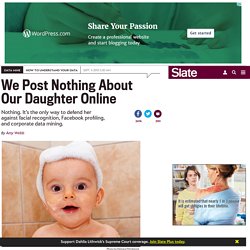 It was my friend’s 5-year-old daughter “Kate,” (a pseudonym) standing outside of her house in a bright yellow bikini, the street address clearly visible behind her on the front door. A caption read “Leaving for our annual Labor Day weekend at the beach,” and beneath it were more than 50 likes and comments from friends—including many “friends” that Kate’s mom barely knew. The picture had been uploaded to a Facebook album, and there were 114 shots just of Kate: freshly cleaned and swaddled on the day of her birth … giving her Labradoodle a kiss … playing on a swing set.

But there were also photos of her in a bathtub and an awkward moment posing in her mother’s lacy pink bra. I completely understood her parents’ desire to capture Kate’s everyday moments, because early childhood is so ephemeral. Last week, Facebook updated its privacy policy again. Six thousand respondents to Slate’s survey show a clear trend. Password Reuse. Ring Could Log Users In to Houses, Phones and Website as Soon as Next Month.

The need for more passwords that our feeble human brains struggle to remember can make it feel like we work for the machines instead of the other way around. 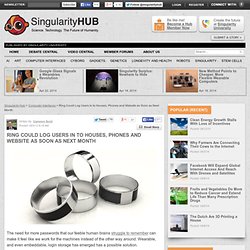 Wearable, and even embeddable, login storage has emerged has a possible solution. After Google researchers floated the idea of a USB stick or a ring that would generate login keys, it appeared the Web giant would lead the way. But a UK project recently closed a $380,000 Kickstarter campaign, promising delivery of 61,000 password-bearing rings in September. The company, NFC Ring, makes a simple silver ring with two near-field communication transmitters inside it, storing access information that can potentially be used to unlock phones, cars or houses or even to log in to websites. One transmitter faces out and stores information that the user may want to share, such as his or her contact information. Users won’t have to charge or update the rings because the transmitters are passive. Images courtesy NFC Ring. David Birch: Identity without a name. Supreme Court: DNA swab after arrest is legitimate search. The justices of the U.S. 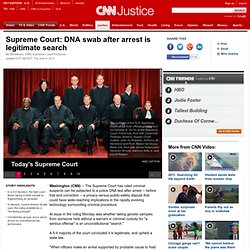 Genetic Privacy: Bite Sci-zed. "Is This You?" - lifelogging, privacy and scandal by Tom Scott at Electromagnetic Field 2012.