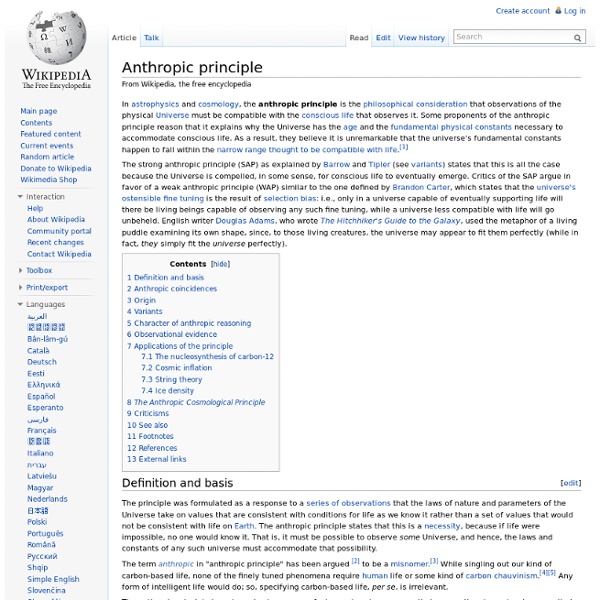 In astrophysics and cosmology, the anthropic principle (from Greek anthropos, meaning "human") is the philosophical consideration that observations of the physical Universe must be compatible with the conscious life that observes it. Some proponents of the anthropic principle reason that it explains why the Universe has the age and the fundamental physical constants necessary to accommodate conscious life. As a result, they believe it is unremarkable that the universe's fundamental constants happen to fall within the narrow range thought to be compatible with life.[1][2] The strong anthropic principle (SAP) as explained by Barrow and Tipler (see variants) states that this is all the case because the Universe is compelled, in some sense, for conscious life to eventually emerge. Definition and basis[edit] Anthropic coincidences[edit] Origin[edit] The phrase "anthropic principle" first appeared in Brandon Carter's contribution to a 1973 Kraków symposium honouring Copernicus's 500th birthday.

A Guide to Exploring Your Journey Your Results Explained 1. Overview 2. Hominin Ancestry Explained Vitalism The synthesis of urea (and other organic substances) from inorganic compounds was counterevidence for the vitalist hypothesis that only organisms could make such compounds. Philosophy[edit] Louis Pasteur argued that only life could catalyse fermentation. (Painting by A. Edelfeldt in 1885.)

Theosophy article: "The Life Principle" by Blavatsky A FEW years back a very interesting controversy raged between several scientists of reputation. Some of these held that spontaneous generation was a fact in nature, whilst others proved the contrary; to the effect that, as far as experiments went, there was found to be biogenesis, or generation of life from previously existing life, and never the production of any form of life from non-living matter. An erroneous assumption was made in the first instance that heat, equal to the boiling point of water, destroyed all life organisms; but by taking hermetically sealed vessels containing infusions, and subjecting them to such or a greater degree of heat, it was shown that living organisms did appear even after the application of so much heat. Along with the fact of biogenesis, we must note, however, Mr. Tracing life downwards we ultimately reach "protoplasm," called by Huxley "the physical basis of life," a colourless, jelly-like substance, absolutely homogeneous without parts or structure.

Diego's Blog: Oxford Physics Aptitude test The PAT The Physics Aptitude Test (P.A.T) is a an admissions test set by Oxford, which is used to short-list and judge candidates (for more info click here). According to Oxford, it's a much better predictor of future academic success than GCSE results, ye well no shit. I mean seriously, GCSE's have been so dummed down that its becoming increasingly difficult not to get an A* in any of the Sciences.

List Of 8 Best Documentary & Infotainment Torrent Trackers And DDL Forums Are there torrent sites or direct download link forums that specialize in documentaries and infotainment content? This is a question we see all too often in our E-mail inbox. The answer is yes, there are quite a few of those sites. Although we have featured them on this blog from time to time, it seems there are still folks out there who have missed out on these invaluable file sharing resources. This article features 8 best torrent sites and DDL forums where you can find premium video content from renowned publishers such as Discovery Channel, National Geographic, Animal Planet, BBC, PBS, HBO, Frontline, Imax, Channel 4 and lots more. Apart from documentaries, these trackers and forums usually index talk shows, Sci Fi and other infotainment content which are not usually found on your average private torrent tracker.

Church of the Holy Sepulchre: Jesus Christ's tomb resealed The tomb that is said to be the site where Jesus' body rested after crucifixion has been covered over after a brief but intense period of scientific analysis, according an exclusive by National Geographic. The burial bed was covered with a layer of marble in order to preserve the limestone from damage. This outer layer was removed on 26 October by researchers from the National Technical University of Athens. Researchers worked around the clock for 60 hours following the removal to investigate the interior of the tomb before it was resealed. Underneath the outer marble layer the researchers uncovered a second marble slab engraved with a cross sign. Beneath this second layer was the limestone burial shelf, which was found to be intact.

Fine-tuning The idea that Naturalness will explain fine tuning was brought into question by Nima Arkani-Hamed, a theoretical physicist, in his talk 'Why is there a Macroscopic Universe?', a lecture from the mini-series "Multiverse & Fine Tuning" from the "Philosophy of Cosmology" project, A University of Oxford and Cambridge Collaboration 2013. In it he describes how naturalness has usually provided a solution to problems in physics; and that it had usually done so earlier than expected. Effing Worms - Eat people and destroy stuff as a giant worm. Uploaded on July 20th, 2010 Keywords: Stick, Figure, Worm, Effing, Arcade Embedding code <embed src=' width='640' height='480'></embed><br /><a href=' target='_blank'>Play more free flash games at LorenzGames.Com</a> Game Description Eat shitloads of stick figures playing as gigantic worm.

Top 10 Most Famous Thought Experiments Thought experiments are mental concepts or hypotheses, often resembling riddles, which are used by philosophers and scientists as simple ways of illuminating what are usually very dense ideas. Most often, they’re used in more abstract fields like philosophy and theoretical physics, where physical experiments aren’t possible. They serve as some hearty food for thought, but given their complex subject matter, it’s not unusual for even the thought experiment itself to be nearly incomprehensible.