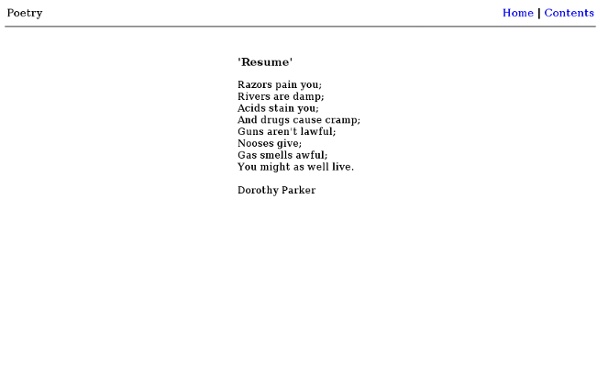 Ironing by Vicki Feaver Vicki Feaver (b. 1943) grew up in Nottingham "in a house of quarrelling women", an emotional inheritance which finds later expression in her poetry. She studied Music at Durham University and English University College, London and worked as a lecturer in English and Creative Writing at University College, Chichester, becoming Emeritus Professor. Her collections have been highly praised, the second, The Handless Maiden, including both the Arvon International Poetry Competition finalist 'Lily Pond', and 'Judith', winner of the Forward Poetry Prize for Best Single Poem. The same collection was also given a Heinemann Prize and shortlisted for the Forward Prize and she has received a Hawthornden Fellowship and a Cholmondeley Award. It's perhaps significant that both of her major prize-winning poems are narrated by murderous women. These poems come from a special recording made for The Poetry Archive on April 11th 2005 at The Audio Workshop, London.

Quote Snack The Quotations Page - Your Source for Famous Quotes

Lukily she wasn't on any of the modern meds . She might have leveled out and we would have her great sarcastic insightful notes ;-) I'm fine how about yourself ? ;-) by mirlen101 Feb 23

first of thanks to dorothy...for creating this..and again than@ cybermyth...dear please keep sending such links ..i love those stuff..thnks.. by nikksnation Feb 22

Now that's poetry ! She's so funny ! Such a Manic depressive ! ;-) I like "Manic depressive " better than the new term BiPolar . BiPolar sounds like they're magnetic ! I'm sure Dorothy Parker was pretty magnetic though ! At least in small doses ! by mirlen101 Feb 22