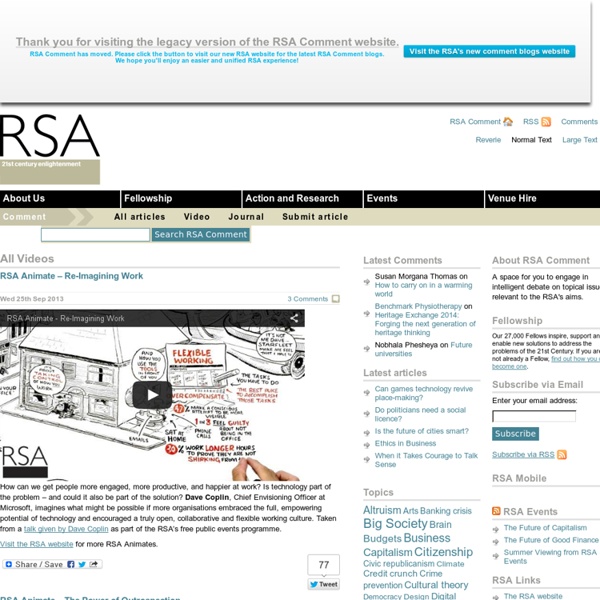 The Peace Revolution Podcast Project Constellation: Connect the Dots, See the Big Picture. A Message to the Future of America by Richard Grove; published by Meria Heller (www.Meria.net) on the Meria Heller Show, May 31, 2006. Wall Street Whistleblower Richard Grove's first publication- a message to media hosts and their audiences- to inspire them to look beyond the veil of illusion and inspect the actual facts regarding some of the biggest myths of our time. To play, click the "pod" icon at the top left, or right-click and "save as" to download. For more information, includes an archive of more than 500 hours podcasts in the form of a curriculum which instills the tools of Intellectual Self Defense.

Rarely known YouTube features YouTube Slam: It is an experiment that was introduced by the Google Research team as a new way of video discovery, in order to find out the next viral sensation among user-generated videos. Every day, the Google team puts up two videos head to head in each category – like Comedy, Cute, Music, Bizarre and Dance – and users get to vote for their choice. They also get bonus points if the video chosen by them wins the round.

Everything is a Remix, Part 3: The Elements of Creativity by Maria Popova What Gutenberg has to do with Thomas Edison and the secret sauce of Apple. Kirby Ferguson’s excellent Everything is a Remix project is, as I’ve previously written, one of the most important efforts to illuminate the mechanisms, paradoxes and central principles of creative culture in modern history — an ambitious four-part documentary on the history and cultural significance of sampling and collaborative creation, reflecting my own deep held belief that creativity is combinatorial. Today, Kirby releases the highly anticipated third installment in the series, titled The Elements of Creativity.

Hutchins School of Liberal Studies "The University is a community of scholars that has as its primary purpose to unsettle the minds of students, to widen their horizons, to inflame their intellect..." — Robert Maynard Hutchins, Founder "I cannot stress how thankful I am to have taken part in Hutchins...I came into Sonoma as a closed-minded and shy student, and I left Sonoma as an empowered woman ready to debate, defend, and take on the world. Top 20 Logical Fallacies - The Skeptics' Guide to the Universe Introduction to Argument Structure of a Logical Argument Whether we are consciously aware of it or not, our arguments all follow a certain basic structure. They begin with one or more premises, which are facts that the argument takes for granted as the starting point. Then a principle of logic is applied in order to come to a conclusion.

The Problem of Economic Calculation - Ludwig von Mises Since recent events helped socialist parties to obtain power in Russia, Hungary, Germany and Austria, and have thus made the execution of a socialist nationalization program a topical issue, Marxist writers have themselves begun to deal more closely with the problems of the regulation of the socialist commonwealth. But even now they still cautiously avoid the crucial question, leaving it to be tackled by the despised "Utopians." They themselves prefer to confine their attention to what is to be done in the immediate future; they are forever drawing up programs of the path to Socialism and not of Socialism itself. The only possible conclusion from all these writings is that they are not even conscious of the larger problem of economic calculation in a socialist society. To Otto Bauer the nationalization of the banks appears the final and decisive step in the carrying through of the socialist nationalization program.

About the Festival on Vimeo June 8th + 9th, Vimeo HQ + ROOT The Vimeo Festival was two days of riveting conversations, inspiring workshops, scintillating screenings, and one truly outstanding closing party. What happened this year Conversations We opened up dialogues, lobbed provocative questions, and gave creators a forum in which to discuss stuff they care about. Workshops People of all skill levels participated in educational workshops with the industry’s leading creators. The Practice of Mathematics Robert P. Langlands, Professor Emeritus, School of Mathematics. There are several central mathematical problems, or complexes of problems, that every mathematician who is eager to acquire some broad competence in the subject would like to understand, even if he has no ambition to attack them all. That would be out of the question! Those with the most intellectual and aesthetic appeal to me are in number theory, classical applied mathematics and mathematical physics. In spite of forty years as a mathematician, I have difficulty describing these problems, even to myself, in a simple, cogent and concise manner that makes it clear what is wanted and why.