Jane McGonigal: The game that can give you 10 extra years of life 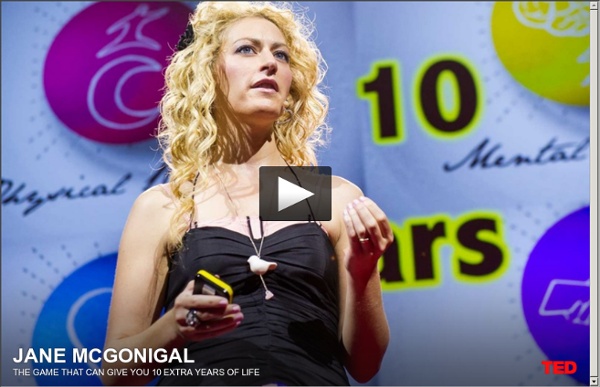 The Gamification of Life On last week’s edition of Spark, my new favorite podcast, the topic was games and the first segment was a very interesting discussion with Jesse Schell, a game designer who also teaches at the Entertainment Technology Center at Carnegie Mellon University. His thesis is that, while games of one kind or another have always been with us, the ability to store and access huge quantities of data in the 21st century is bringing about the “gamification” of life. The whole discussion is worth listening to (an extended version is also on the show site) but there were two pieces that stood out for me. First, is Schell’s view of school as gaming.

Can Open Government Be Gamed? If information is power, the first step to gaining power is to get the right data. The Obama administration is a big proponent of opening up government data and making it digitally available. Today at the Personal Democracy Forum in New York City, the government’s new chief information officer Vivek Kundra announced USAspending.gov, a new site which launched today that tracks government spending with charts and lists ranking the largest government contractors (Lockheed, Boeing, Northrop Grumman, etc.) and assistance recipients (Department of Healthcare Services, New York State Dept. of Health, Texas Health & Human Services Commission, etc.). There is also the Data.gov project, which is attempting to digitize government data and make it available in its raw form for citizens and companies to sift through. Digital tools are bringing participation back to democracy, or at least that is the idea.

Fog Catchers "If we can help generate alternative sustainable economic activities, we will be increasing the community’s chances for a viable livelihood in the face of climate change." Juan José RodríguezThe Nature Conservancy’s Coasts and Deserts coordinator by Marcela Torres Vea también en español Have you ever seen a desert turn into a lush green valley bursting with life?

From Gamification to Intelligence Amplification to The Singularity “Moore’s law became obsolete as far as graphics were concerned. Moore’s law was doubling. It was accelerating so fast that NVida started calling it Moore’s law cubed.” The following article was edited by R.U. Sirius and Alex Peake from a lecture Peake gave at the December 2010 Humanity+ Conference at the Beckman Institute in Pasadena, California. The Playpump: How a Simple Gamification Concept can Save the (third) World New to Gamification? Check out my post What is Gamification & my Gamification Framework: Octalysis Gamification visits the Third World Most of the time, we think of Gamification as a technique to get consumers to like our products more, to be more productive in life, and improve our workplace, but Gamification can sometimes be used to save an entire nation.

Clarity on Spirit Science (A MUST SEE!) There have been a lot of questions recently about Spirit Science and it’s evolution. What are we up to, where are we going. Some people had made up some ideas as well about Spirit Science becoming Cult-Like and a new Religion, which Jordan and I thought was ridiculous. So we decided to put together this video to shine some Clarity on the matter. We both apologize for creating any confusion that we may have, and we thank you loving beings for staying loving and kind no matter what video is posted. As for everyone who has been so mean and nasty recently, perhaps this video can help clear up some things about how you have been feeling… and perhaps this can also be a reminder not to be so mean.

The Future of Gamification Introduction and overview of responses The word “gamification” has emerged in recent years as a way to describe interactive online design that plays on people’s competitive instincts and often incorporates the use of rewards to drive action—these include virtual rewards such as points, payments, badges, discounts, and “free” gifts; and status indicators such as friend counts, retweets, leader boards, achievement data, progress bars, and the ability to “level up.” While some people dismiss gamification as a fad, neuroscientists are discovering more and more about the ways in which humans react to such interactive design elements. They say such elements can cause feel-good chemical reactions, alter human responses to stimuli—increasing reaction times, for instance—and in certain situations can improve learning, participation, and motivation. Technology consultancy Gartner has projected 50% of corporate innovation will be “gamified” by 2015.

Game mechanics for causes – Catalysts for Change – Evolution of Philanthropy Nothing is more captivating than a well-thought out game. That’s why more and more initiatives are building games (or using game mechanics) to create positive social change. Here’s a new one that launched today – it’s called Catalysts for Change, and it gives players a game-like competition for sharing and responding to ideas about solving the world’s social problems. It’s a bit like Quora meets Twitter meets Trivial Pursuit. Here’s a video they put together that provides a brief overview: One you sign up, you’re asked to submit “cards”, which are basically suggestions or responses to specific issues.