« If you want to change attitudes, start with a change in behavior. » Katherine Hepburn

» Mark Manson. What is Positive Thinking in Psychology? 9 Thought-Provoking Findings. What does it mean to think positively? 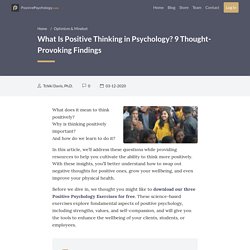 Why is thinking positively important? And how do we learn to do it? In this article, we’ll address these questions while providing resources to help you cultivate the ability to think more positively. With these insights, you’ll better understand how to swap out negative thoughts for positive ones, grow your wellbeing, and even improve your physical health. Faking Your Emotions at Work Could Take a Heavy Toll. Source: clipartsworld New research suggests that faking a positive attitude and being overly concerned with making a good impression to help advance your career often backfires. 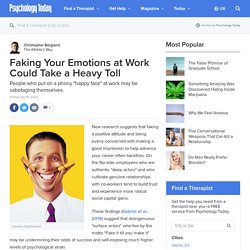 On the flip side, employees who are authentic "deep actors" and who cultivate genuine relationships with co-workers tend to build trust and experience more robust social capital gains. article continues after advertisement These findings (Gabriel et al., 2019) suggest that disingenuous "surface actors" who live by the motto "Fake it till you make it" may be undermining their odds of success and self-imposing much higher levels of psychological strain. This new "emotional labor" research by Allison Gabriel of the University of Arizona and colleagues consisted of three complementary studies that surveyed more than 2,500 working adults from industries including education, engineering, financial services, and manufacturing. Deep actors. Positive Daily Affirmations: Is There Science Behind It? Last Updated on March 5, 2019 Self-help books often promote the power of positive affirmations. 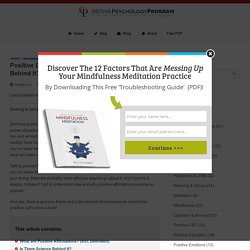 You, me, and almost everybody in the 21st century have heard of them. But if you’ve never tried them before, the idea can seem incredibly awkward. Telling yourself how awesome you are can seem bizarre, but if that’s all your doing, there are probably more effective ways to go about it. Why Positive Thinking Doesn’t Work. Sometimes it takes the words of others to soothe our own soul. 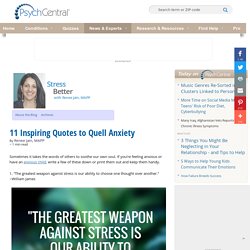 If you’re feeling anxious or have an anxious child, write a few of these down or print them out and keep them handy. 1. “The greatest weapon against stress is our ability to choose one thought over another.” ~William James. What is Positive Mindset and 89 Ways to Achieve a Positive Mental Attitude. Pollyanna Principle: The Psychology of Positivity Bias. When you think of “bias” you probably think of it in terms of something negative. 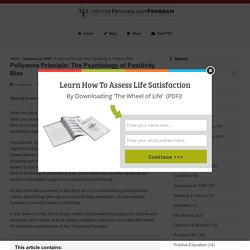 For example, you might think of being biased against a group of people and link it to racism, or you may think of the theory of confirmation bias, which states that we often ignore all the evidence that doesn’t support our preferred way of thinking. It’s true that bias is generally a bad thing since it involves having preconceived notions about things that may turn out to be false, unrealistic, or even harmful; however, a bias isn’t always a bad thing. In fact, there is a bias that is deeply rooted and pervasive throughout all cultures and all people, and it helps us to be happier, healthier, and more connected with others. Could Thinking Positively Be Dangerous Right Now? If, like me, you’ve started opening the newspapers each day with a sense of dread and disbelief about that latest actions of President Trump and his administration, it can be hard to figure out exactly what you’re meant to do with these feelings. 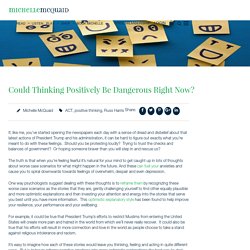 Should you be protesting loudly? Trying to trust the checks and balances of government? Why Trying to Be Happy Is So Depressing. Think Twice Before Overdoing The Positive Thinking, Cautions Psychology Study. The unexpected negative effect of positive thinking on mental health. 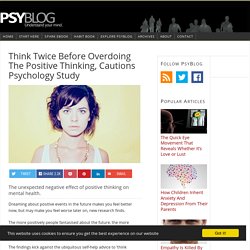 Dreaming about positive events in the future makes you feel better now, but may make you feel worse later on, new research finds. The more positively people fantasised about the future, the more depressive symptoms people experienced up to seven months later, the study found. The findings kick against the ubiquitous self-help advice to ‘think positive’. Professor Gabriele Oettingen, who led the research ,said: “Our findings suggest that as pleasurable and helpful as positive fantasies are for depressive mood in the moment, they can be problematic and cumbersome over time.” The reason for the dangerous effect of positive fantasies may be down to lack of effort. People who fantasise about the future tend to put less effort in when tomorrow becomes today. As I’ve written previously in Success! It’s expectations that matter more than fantasies, as I wrote in the same article: The new study’s authors write: Related articles: Self-Enhancement. Optimism. 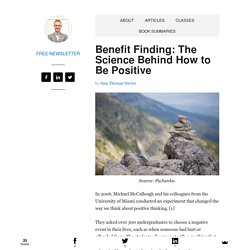 In 2006, Michael McCullough and his colleagues from the University of Miami conducted an experiment that changed the way we think about positive thinking. [1] They asked over 300 undergraduates to choose a negative event in their lives, such as when someone had hurt or offended them. The students all came out with something that had been troubling them. Some had been abandoned, while others had been cheated on, insulted, or rejected. A third of the participants were then asked to spend a few minutes describing the incident in detail.

A second group was asked to do the same thing, however, they were asked to focus on the benefit that had come from the experience, such as becoming a stronger or more experienced person. How a Shift in Your Vocabulary Can Instantly Change Your Attitude. This past year I have noticed how my vocabulary impacts my attitude. 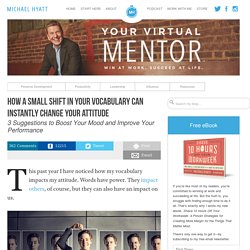 Words have power. They impact others, of course, but they can also have an impact on us. I was once headed out of town for a speaking engagement. A friend called and asked me where I was going. I said, “Oh, I’m headed to San Jose. The moment I hung up, it hit me. Happiness Myths.

Positive Organizational Psychology. Always Look On The Bright Side Of Life... “I Am a Lovable Person!”: Why Positive Mantras Backfire For Some. The positive mantra has long been a staple of self-help books. 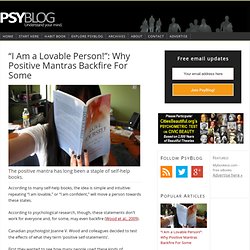 According to many self-help books, the idea is simple and intuitive: repeating “I am lovable,” or “I am confident,” will move a person towards these states. According to psychological research, though, these statements don’t work for everyone and, for some, may even backfire (Wood et al., 2009). Canadian psychologist Joanne V. Wood and colleagues decided to test the effects of what they term ‘positive self-statements’. “Positive Attitude” Bullshit: On the dangers of “radical self-love” There is an endless supply of people who are ready and willing to inform us about what we are doing wrong, and how we can alter our behaviour so we can get ahead and inject magic and happiness into our lives.

Between modern day guru Gala Darling who believes “positive thoughts generate positive realities,” and you can “manifest” your own destiny, to capitalist public thinkers such as Oprah Winfrey telling us positive thinking can help us obtain “the sweet life,” it is easy to get misled into a muddle of mistruths. A recent blog by Gala is entitled “Happiness is simple: why too many choices make us miserable and 5 ways to improve your life!” Yeah? Nah. Too many choices are not the issue for a huge majority of the political underclass; a lack of choice is exactly the problem. Gala and magazines such as Oprah Winfrey’s O Magazine, tell us: Smile or Die [ RSA Animate : Barbara Ehrenreich ]