To the Sheer Love of Madness, a harry potter fanfic. Not Less of Love - Harry/Draco, NC17. Title: Not Less of LoveAuthor: literaryspellPairing: Harry/DracoPrompt #: 145Rating: NC-17Word Count: 36000Summary: The war changed everyone. 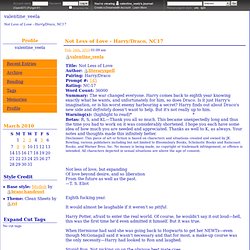 Harry comes back to eighth year knowing exactly what he wants, and unfortunately for him, so does Draco. Is it just Harry's imagination, or is his worst enemy harbouring a secret? Harry finds out about Draco's new side and definitely doesn’t want to help. But it's not really up to him.Warning(s): (highlight to read)* eighth year EWE, explicit sex *Betas: R, S, and KL—Thank you all so much. Not less of love, but expandingOf love beyond desire, and so liberationFrom the future as well as the past. Eighth fucking year. It would almost be laughable if it weren’t so pitiful.

Harry Potter, afraid to enter the real world. When Hermione had said she was going back to Hogwarts to get her NEWTs—even though McGonagall said it wasn’t necessary and that for most, a make-up course was the only necessity—Harry had looked to Ron and laughed. Stupid Ron. “Mr. “Go!” Topgallant : HP : Commencement. Title: Commencement Archiving: just ask. 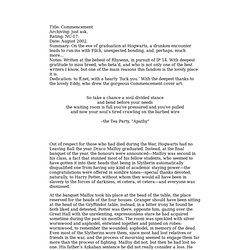 Rating: NC-17. Date: August 2002. Summary: On the eve of graduation at Hogwarts, a drunken encounter leads to run-ins with Filch, unexpected bonding, and, perhaps, much more... Notes: Written at the behest of Rhysenn, in pursuit of IP 14. With deepest gratitude to miss breed, who beta’d, and who is not only one of the best writers I know, but one of the main reasons this fandom is the lovely place it is. So take a chance a soul divided stance and bend before your needs the waiting room is full you’ve pressured and you’ve pulled and now your soul’s tired crawling on the barbed wire --the Tea Party, "Apathy" Out of respect for those who had died during the War, Hogwarts had no Leaving Ball the year Draco Malfoy graduated. 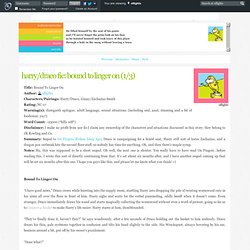 Word Count: ~23000 (*kills self*)Disclaimer: I make no profit from nor do I claim any ownership of the characters and situations discussed in this story; they belong to JK Rowling and Co. Summary: Sequel to On Fingers Broken Long Ago; Draco is campaigning for a board seat, Harry still sort of hates Zacharias, and a dragon pox outbreak hits the second floor staff, so nobody has time for anything. Oh, and then there's maple syrup. Notes: Ha, this was supposed to be a short sequel. Bound To Linger On “I have good news,” Draco crows while bursting into the supply room, startling Harry into dropping the pile of twisting wormwood cuts in his arms all over the floor in front of him.

“They’ve finally done it, haven’t they?” “Done what?” The grin widens. “Excuse me? Domestic by frostywonder - Harry/Draco Smoochfest 2012. Do·mes·tic [duh-mes-tik] adjective --of or pertaining to the home, the household, household affairs, or the family. 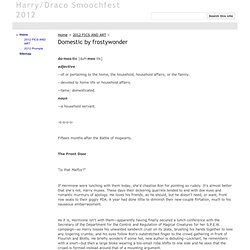 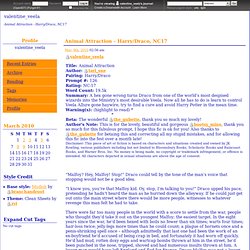 Now all he has to do is learn to control Veela Allure gone haywire, try to find a cure and avoid Harry Potter in the mean time.Warning(s): (highlight to read) *Nothing to worry about here, just sex between 2 consenting adult males*Beta: The wonderful the_gubette, thank you so much my lovely! Author's Note: This is for the lovely, beautiful and gorgeous. Take a chance, make a change. Author: cassie_black12Recipient: stellamoonTitle: Take a Chance, Make a ChangePairing(s): Harry/Draco, Ron/Hermione, Pansy/BlaiseSummary: It was Hermione's nagging that sent Harry to Desirable Dwellings. 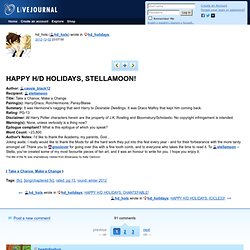 It was Draco Malfoy that kept him coming back.Rating: PG-13Disclaimer: All Harry Potter characters herein are the property of J.K. Rowling and Bloomsbury/Scholastic. No copyright infringement is intended.Warning(s): None, unless verbosity is a thing now? Groolover for going over this with a fine tooth comb, and to everyone who takes the time to read it. Stellamoon -- Stella, you've created some of my most favourite pieces of fan art, and it was an honour to write for you. Hp_creatures: FIC: In the Forests of The Night [Harry/Draco - NC-17] Here's The Pencil, Make It Work - ignatiustrout - Harry Potter - J. K. Rowling. For love of a family. Doctor Doctor (Is This Love I'm Feeling?) - Harry/Draco Smoochfest 2011. Harry looked up at the voice who called his name, as did several other people. 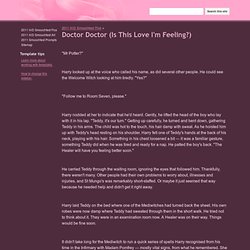 He could see the Welcome Witch looking at him tiredly. "Yes? " "Follow me to Room Seven, please. " Harry nodded at her to indicate that he'd heard. Gently, he lifted the head of the boy who lay with it in his lap. He carried Teddy through the waiting room, ignoring the eyes that followed him. Harry laid Teddy on the bed where one of the Mediwitches had turned back the sheet. It didn't take long for the Mediwitch to run a quick series of spells Harry recognised from his time in the Infirmary with Madam Pomfrey — mostly vital signs, from what he remembered. Harry mumbled a thanks as she slipped out the door, shutting it softly behind her. He'd jumped at the chance to sit for Teddy when Andromeda had asked. Things had been going quite well, too — only one instance of misbehaviour, and that a mild one — until this morning.

When the figure said something back and stepped fully into the room, Harry had to reconsider. Small gardens and bright fish - Holly and Hawthorn, Thistle and Thyme (1/4) Unhook the Stars. Sardinian Blue - Talk to Me [oneshot] 1/3. Bed & late night snack. Savage.