This Old House, a harry potter fanfic. Hey , everyone! 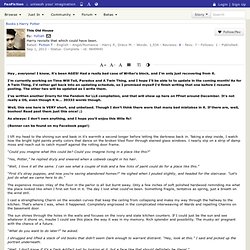 I know, it's been AGES! Had a really bad case of Writer's block, and I'm only just recovering from it. I'm currently working on Time Will Tell, Paradox and A Twin Thing, and I hope I'll be able to to update in the coming month! As for A Twin Thing, I'd rather get back into an updating schedule, so I promised myself I'd finish writing that one before I resume posting. The other two will be updated as I write them. I've written another Drarry for the Fandom for LLS compilation, and that will show up here on FFnet around December. Well, this one here is VERY short, and unbetaed. As always: I don't own anything, and I hope you'll enjoy this little fic! (Banner can be found on my Facebook page!)

I lift my head to the shining sun and bask in it's warmth a second longer before letting the darkness back in. "Could you imagine what this could be? Draco and Harry Fan Fiction Archive. Disclaimer: Harry Potter and all identifiable characters/plots are owned and copyrighted by JK Rowling and various publishers including, but not limited to, Bloomsbury Books, Scholastic Books, and Warner Bros. 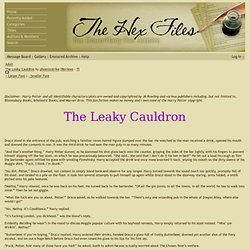 This fan fiction makes no money and I own none of the Harry Potter copyright. The Leaky Cauldron Draco stood in the entrance of the pub, watching a familiar raven-haired figure slumped over the bar. He watched as the man received a drink, opened his mouth and downed the contents in one. It was the third drink he had seen the man gulp in as many minutes. “And that’s another thing,” Harry Potter slurred, as he slammed his shot-glass back onto the counter, gripping the sides of the bar tightly with his fingers to prevent himself slipping off the bar stool, on which he was precariously balanced. “No shit, Potter,” Draco drawled, not content to simply stand back and observe for any longer.

Faith Wood - FIC: The Slytherin Christmas Party (H/D; PG-13; 2000) In Hot Water. Draco and Harry Fan Fiction Archive. Disclaimer: I do not own Harry Potter or any other characters, this ficlet is written for fun and not for profit. 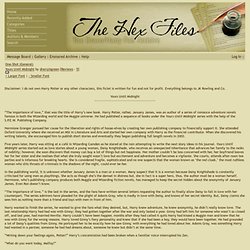 Five years later, Harry was sitting at a café in Wizarding Camden as he stared at the rain attempting to write the next story ideas in his journal. In the publishing world, it is unknown whether January James is a man or a woman. Harlequin HP Style - Fic: My Universe Will Never Be the Same. Barreling Through the Night - "Hurt for the Right Reasons", Harry/Draco, NC-17. 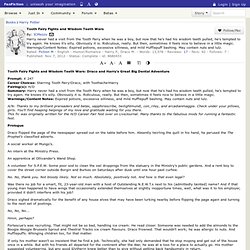 Draco, with Toothache! HarryPairing(s): H/DSummary: Harry never had a visit from the Tooth Fairy when he was a boy, but now that he's had his wisdom teeth pulled, he's tempted to try again. He knows it's silly. Obviously it is. A/N: Thanks to my brilliant prereaders and betas, sapphirescribe, twilightmundi, con_riley, and arcadianmaggie. Prologue Draco flipped the page of the newspaper spread out on the table before him. A social worker at Mungo's. An intern at the Ministry Press. Lovebites, a harry potter fanfic. Drarry prompted by bluishtigers prompt: I was thinking about how Draco would react if he saw suggestive marks on Harry's neck, that he didn't do himself… a sixth, or 8th year fic. 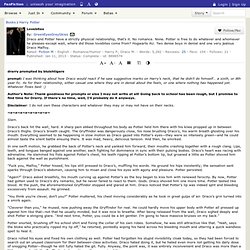 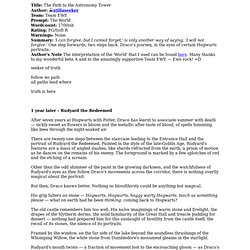 Summary: 'I can forgive, but I cannot forget,' is only another way of saying, 'I will not forgive.' One step forwards, two steps back. Draco's journey, in the eyes of certain Hogwarts portraits. Author's Note The interpretation of the 'World' that I used can be found here. Seeker of truth. Imprinted - marguerite_26 - Harry Potter - J. K. Rowling. Lipstick, a harry potter fanfic. Harry lay on the hotel room bed trying to rein in his impatience. 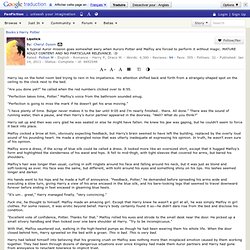 His attention shifted back and forth from a strangely-shaped spot on the ceiling to the clock next to the bed. "Are you done yet? " he called when the red numbers clicked over to 8:55. "Perfection takes time, Potter. " Malfoy's voice from the bathroom sounded smug. "Perfection is going to miss the mark if he doesn't get his arse moving.

" "I have plenty of time. Harry sat up and then was very glad he was seated or else he might have fallen. Hd_fan_fair: FIC: Ruck Me, Maul Me, Make Me Scrum (R) Title: Ruck Me, Maul Me, Make Me ScrumAuthor: vix_spesRating: RPairing: Harry/Draco (with background Ron/Hermione)Prompt: # 89Career Choices: Harry – rugby player, Draco - PABeta: the absolutely fantastic janealphaSummary: When they made it through this unscathed, Draco was going to kill his boss…Warnings/Content Notes: non-magical AUWord Count: ~7,700Authors Note: I’ve only attempted to write Harry/Draco once before but saw this prompt and absolutely couldn’t resist! 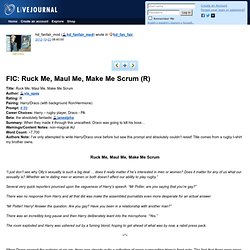 Title comes from a rugby t-shirt my brother owns. Hd_smoochfest: FIC: Speechless. Double Dare, a harry potter fanfic. Title: Double DareAuthor: Silvia Kundera Disclaimer: This story's author does not claim to own any of the characters, concepts, or ideas originating in J. 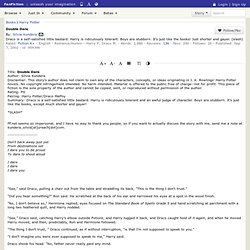 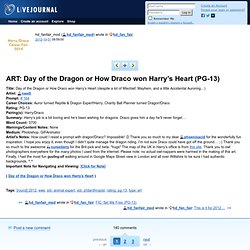 Harry; Charity Ball Planner turned Dragon! A Szerelem Labirintusa - Viridescence - Harry Potter - J. K. Rowling. HP Threesomes - At the Edge of the Crossroads and Leaning for rzzmg. Everything, a harry potter fanfic. Harry had stirred his potion three times counterclockwise before adding the daisy roots. He knew he had. His potion should have been turning this strange pink colour, yes, but it shouldn't have been bubbling so angrily. He took a small step back and checked the instructions on the board.

The potion exploded, coating him with a lurid pink substance. Damned if he knew why. Snape closed his eyes for a moment, looking exasperated beyond measure. Draco glanced at the Gryffindor, covered in bright pink love potion, cleaning the goop off his glasses. "What is the meaning of this, Potter? " Harry snapped his head up to glare at Snape. He trailed off halfway through, staring at Snape with his mouth slightly open, his face gone slack and his eyes dreamy and glazed. "I'm sorry Professor," he said breathlessly. Draco's jaw had dropped from shock, not that this was any different from the rest of the class.

Professor Snape's skin had an even greener cast than usual. Bored. Disclaimer: Harry Potter and company are property of J.K. Rowling. Bored by Vorabiza “This is boring,” Harry said, sighing. He was lying atop one of the work tables with his head hanging upside down over the edge. “Only you could consider a Death Eater attack boring,” Draco spat.

Harry studied him curiously. Treasure Hunters - Lomonaaeren - Harry Potter - J. K. Rowling. It's Cold Outside. - Caidyn - Harry Potter - J. K. Rowling. It was Christmas Eve and the snow was falling down quickly out the window he was looking out. In his hand was a glass of spiked eggnog. And he wasn't home with his little boy, Teddy Lupin, like he should be. No, he was at his lover's home of getting close to a year. It was a surprising fact when he had come out to Ron and Hermione, but they accepted it. And they also accepted the man who he was just starting to date, Draco Malfoy. As he looked out the window he knew that he had to be getting back to Grimmauld place where he had lived since the war had ended.

Zionsstarflight od the draco malfoyfish: Title: "Flight of the Draco Malfoy"Author: ZSRating: GWords: ~ 2000Disclaimer: All JKR's.Summary: The seventh years try their hands at Animagus Transfiguration.Notes: ahahahaha. This was so much FUN to write. I hope you enjoy it. eta: tracy_loo_who wonderfully illustrated one of the scenes, which you'll find linked in the story. <333333. What is the purpose of the Animagus Transfiguration? Is it to be useful in a fight? Only Fools Rush In, a harry potter fanfic. Authors Note: This story is a birthday gift to Shannon; one of my brilliant beta's and part of Team Awesome. The title of the story was inspired by the song 'Can't help falling in love with you,' which was recently covered by Ingrid Michaelson (whom I love) and I was listening to it and thinking about our favorite boys. I'm afraid I haven't had this story beta'ed however, so please bear with any errors in the writing. Birthday Kidnapping, a harry potter fanfic.

Birthday Kidnapping. A Lesson in Negativity. Pervy Slash Whore - Fic: What Are Words For? (1/6) Draco and Harry Fan Fiction Archive. Disclaimer: Harry Potter and Draco Malfoy are not mine, no matter how much I might wish it were otherwise. They belong to the Scottish Lady and the Big Movie Studio. I just occasionally take them out to play. Millicent Bulstrode slouched into the library, passing through the main reading room, edging between the tables of chattering third and fourth years to the more private room beyond.

She was utterly irritated at having to spend the afternoon in detention; it wasn’t her fault that Parkinson had transfigured her potions homework into an unflattering stick cartoon of Snape wearing a dress. My teacher is a death eater. Letters to Harry, a harry potter fanfic. The Emotional Pervert - Nobody's Ever Died of a Broken Heart. Remote, a harry potter fanfic. Disclaimer: I do not own either of the boys or recognisable content. I own a laptop with a missing shift key and an uncontrollable imagination. Warnings: Slash, bad language and MATURE AND EXPLICIT sexual content. Authors note: Dedicated to the wonderful Xana-Belle, without whom I would never have had another go at writing smut. Shout outs also for the lovely brinimc, and everyone on LJ who left me wonderful comments on the LoveAnonMeme.

Cake or Death, a harry potter fanfic. A Gift of Self - tryslora - Harry Potter - J. K. Rowling. “It’s my birthday.” Contrelamontre: "Open Doors", HP, DM/HP, PG-13. Draco opens the door. On his doorstep is a black cat. It is scrawny and pathetic looking. It shivers when Draco crouches down, and it growls but doesn’t bite when Draco pets it on the head. Paris. Parisby Abby. ANger Management. Faith Wood - FIC: Touchstone (Harry/Draco; NC-17; ~7,5K) RIddikulus. Hd_smoochfest: Fic: Two To A Tent. Wings n Things. The announcement went up on the House bulletin boards later that week. This year’s Halloween celebrations would be different - an idea that the previous Headmaster had many times considered, but never implemented. In addition to the usual feast, the school would be hosting a party of sorts, an idea that had been suggested years before by a group of Muggleborns. Warning: Tentacles - FIC: Packing the Flat (Harry/Draco) NC-17.