The psychology of choking 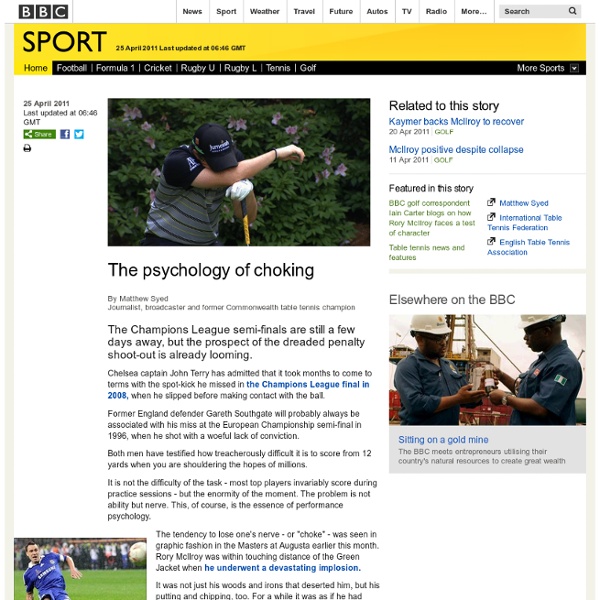 25 April 2011 Last updated at 06:46 GMT By Matthew Syed Journalist, broadcaster and former Commonwealth table tennis champion The Champions League semi-finals are still a few days away, but the prospect of the dreaded penalty shoot-out is already looming. Chelsea captain John Terry has admitted that it took months to come to terms with the spot-kick he missed in the Champions League final in 2008, when he slipped before making contact with the ball. Former England defender Gareth Southgate will probably always be associated with his miss at the European Championship semi-final in 1996, when he shot with a woeful lack of conviction. Both men have testified how treacherously difficult it is to score from 12 yards when you are shouldering the hopes of millions.

How sports psychologists can save you from choking Kenny Perry could taste history. He had a two-shot lead with two holes to go at the 2009 Masters - all he had to do was not make any big mistakes and he would become, at 48, the oldest Masters champion in history. For three days at Augusta, he had played the best golf of his life: on the first 70 holes, he made only four bogeys. But then, at the 71st hole, everything started to fall apart. London 2012: 'It can be dark and lonely at the top,’ says Victoria Pendleton “Being an athlete at the top of your game can be a lonely and dark place,” explains Michael Caulfield, a sports psychologist with The Sporting Edge and former chief executive of the Jockeys Association. “It can be absolutely heartbreaking when something doesn’t go your way – when your body lets you down, for example. All those tears we see on the podiums; that’s when they realise all the sacrifices they’ve put themselves through to get there.” In 2005, Olympic champion Dame Kelly Holmes revealed that she, like Pendleton, used to self-harm.

Milo of Kroton Milo of Kroton: was "the most illustrious of athletes..." (Strabo, Geography, 6.1.12). Born over 2,000 years ago in an ancient Greek colony of southern Italy, he won the Olympic wrestling championship six times between 540 BCE and 516 BCE. London 2012: Should athletes prepare for defeat? 30 July 2012Last updated at 00:13 GMT By Stephanie Hegarty BBC World Service The defeated: Michael Phelps, Mark Cavendish and Suzy Favor Hamilton Until recently, sports psychology mainly focused on training the mind to win. But most Olympic competitors, including the very best like swimmer Michael Phelps and cyclist Mark Cavendish, lose.

Olivia's BTEC Sport Blog: BTEC National level 3 Unit 5 - Personality LO1 : Know the effect of personality and motivation on sports performance. Personality. ‘Your personality can affect the type of sports you like and excel in’ (www.teachpe.com) This can be shown through the different types of personality groups/traits, and how their contents and factors can benefit or work against you when in a sporting environment. Different Athletes display their own unique patterns of behaviour in the course of sports performance, personality can be sectioned into many different parts…confidence is one example of a behaviour pattern within personality this ultimately determines whether an individual has a strong commitment to participate and achieve. The study of personality in sport also includes perceptual and cognitive characteristics such as ones ability to concentrate and direct the focus of attention in a competitive situation when there is a pressure to succeed. Theories of Personality.

Top 10 Inspirational Videos for Athletes (Part 2) - Carrie Cheadle - Mental Skills Training Coach Sometimes you need to draw strength from others when you need to keep moving. If you read Part 1 of this post, you’ll know that for the past 6 months I’ve been searching the web trying to find some of the most awe-inspiring and motivational-boosting videos out there. Part 2 rounds out the next five videos of my compilation of the top ten motivational videos for finding inspiration, encouragement, resilience, strength, and mental toughness. The Psychology Of Violence In Sports — On The Field And In The Stands In this Aug. 20, 2011 photo, football fans fight in the stands during a preseason NFL football game between the San Francisco 49ers and the Oakland Raiders in San Francisco. (Ben Margot/AP) I thought my mother was a quintessentially maternal woman. But at one of my college’s football games, just before the last crucial goal line play, she yelled out her wish for the rival fullback: “Kill him! Kill him!” she shouted.

Bounce: How Champions Are Made by Matthew Syed - a Book Review by Rachel Fanshawe I was slightly disappointed that there wasn't a single book for me under the tree this Christmas, especially as I'd been relying on it for my holiday reading. Luckily my husband had packed several, and top of the pile was Bounce : How Champions are Made by Matthew Syed. It proved to be both enjoyable and stimulating, and a book that I would highly recommend. Practise, practise In Bounce, Syed makes a compelling argument that success at the highest levels is not a result of talent but of many hours of purposeful practice combined with the right mindset. Manchester United – from a group psychology perspective In may 2013, Alex Fergunsons`26 years, successful leadership of Manchester United came to an end. During his career as manager, the club won the Premier League 13 times and Champions league both in 1999 and 2008. Stories about “hairdryer-treatment”, fatherly leadership and the fact that he rebuilt winning teams again and again, makes him not only one of the best managers in english footballs history – but also a legend. David Moyes, the former Everton manager, was chosen to take on one of the toughest jobs in the world of sports. Currently Man Utd is struggling in the league, 10 points behind leader Arsenal. And the FA-cup exit against Swansea, carried more wood to the fire for the supporters demanding Moyes` handing in his resignation.