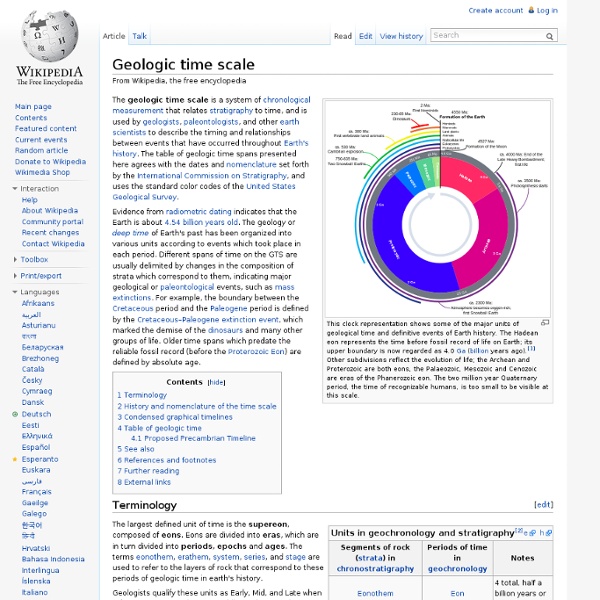 The geologic time scale (GTS) is a system of chronological measurement that relates stratigraphy to time, and is used by geologists, paleontologists, and other earth scientists to describe the timing and relationships between events that have occurred throughout Earth's history. The table of geologic time spans presented here agrees with the nomenclature, dates and standard color codes set forth by the International Commission on Stratigraphy. Evidence from radiometric dating indicates that the Earth is about 4.54 billion years old. The geology or deep time of Earth's past has been organized into various units according to events which took place in each period. Different spans of time on the GTS are usually delimited by changes in the composition of strata which correspond to them, indicating major geological or paleontological events, such as mass extinctions. Terminology[edit] History and nomenclature of the time scale[edit] Graphical representation of Earth's history as a spiral

Grand Canyon Lava Flows: A Survey of Isotope Dating Methods Do analyses of the radioactive isotopes of rocks give reliable estimates of their ages? That is a good question, which ordinarily requires a lengthy and technical answer. In order to give an initial response, we might confine our attention to dating of lava flows, the most easily dated rocks, and limit our discussion to the Grand Canyon, which contains thoroughly studied lava flows profoundly relevant to the creation/evolution question. Furthermore, we might begin by focusing our investigation to "wholerock" potassium-argon (K-Ar) and rubidium-strontium (Rb-Sr) techniques, the two most popular methods for dating rocks. Popular Dating Methods Both the K-Ar and Rb-Sr methods make use of radioactive decay of a parent isotope to a stable daughter isotope. 87 S r p = 87 Sr o + 87 Rb p (e lt -1) & nbsp; (1) The analytical equipment used to determine the abundances of isotopes is more accurate in determining ratios of isotopes than their absolute abundances. Grand Canyon Lava Flows 1. * Dr.

Mesozoic The Mesozoic era /mɛzɵˈzoʊɪk/ is an interval of geological time from about 252 to 66 million years ago. It is also called the age of reptiles, a phrase introduced by the 19th century paleontologist Gideon Mantell who viewed it as dominated by reptiles such as Iguanadon, Megalosaurus, Plesiosaurus and what are now called Pseudosuchia.[1] The era began in the wake of the Permian–Triassic extinction event, the largest well-documented mass extinction in Earth's history, and ended with the Cretaceous–Paleogene extinction event, another mass extinction which is known for having killed off non-avian dinosaurs, as well as other plant and animal species. Geologic periods[edit] The lower (Triassic) boundary is set by the Permian–Triassic extinction event, during which approximately 90% to 96% of marine species and 70% of terrestrial vertebrates became extinct.[3] It is also known as the "Great Dying" because it is considered the largest mass extinction in the Earth's history. Climate[edit]

Cretaceous The Cretaceous (/krɨˈteɪʃəs/, krə-TAY-shəs), derived from the Latin "creta" (chalk), usually abbreviated K for its German translation Kreide (chalk), is a geologic period and system from circa 145 ± 4 to 66 million years (Ma) ago. In the geologic timescale, the Cretaceous follows the Jurassic period and is followed by the Paleogene period of the Cenozoic era. It is the last period of the Mesozoic Era, and, spanning 79 million years, the longest period of the Phanerozoic Eon. Geology[edit] Key events in the Cretaceous An approximate timescale of key Cretaceous events. Research history[edit] Stratigraphic subdivisions[edit] As with other older geologic periods, the rock beds of the Cretaceous are well identified but the exact ages of the system's base is uncertain by a few million years. Rock formations[edit] The high eustatic sea level and warm climate of the Cretaceous meant a large area of the continents was covered by warm shallow seas. Paleogeography[edit] Climate[edit] Life[edit]

Jurassic Etymology[edit] The chronostratigraphic term "Jurassic" is directly linked to the Jura Mountains. Alexander von Humboldt recognized the mainly limestone dominated mountain range of the Jura Mountains as a separate formation that had not been included in the established stratigraphic system defined by Abraham Gottlob Werner, and he named it "Jurakalk" in 1795.[4][5][6][7] The name "Jura" is derived from the Celtic root "jor", which was Latinised into "juria", meaning forest (i.e., "Jura" is forest mountains).[5][6][8] Divisions[edit] Key events in the Jurassic An approximate timescale of key Jurassic events. Various dinosaurs roamed forests of similarly large conifers during the Jurassic period. Paleogeography and tectonics[edit] During the early Jurassic period, the supercontinent Pangaea broke up into the northern supercontinent Laurasia and the southern supercontinent Gondwana; the Gulf of Mexico opened in the new rift between North America and what is now Mexico's Yucatan Peninsula.