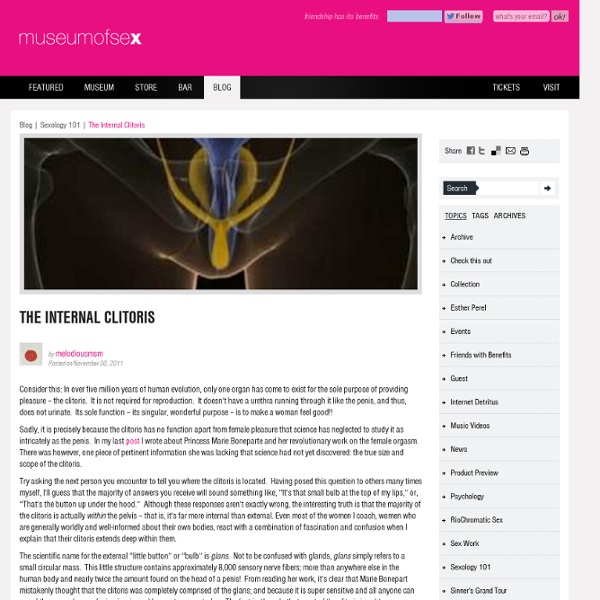 Consider this: In over five million years of human evolution, only one organ has come to exist for the sole purpose of providing pleasure—the clitoris. It is not required for reproduction. It doesn’t have a urethra running through it like the penis, and thus, does not urinate. Its sole function—its singular, wonderful purpose—is to make a woman feel good! Sadly, it is precisely because the clitoris has no function apart from female pleasure that science has neglected to study it as intricately as the penis. In my last post I wrote about Princess Marie Boneparte and her revolutionary work on the female orgasm. Try asking the next person you encounter to tell you where the clitoris is located. The scientific name for the external “little button” or “bulb” is glans. The glans is connected to the body or shaft of the internal clitoris, which is made up of two corpora cavernosa. Sketch of an erect clitoris The corpus cavernosum also extends further, bifurcating again to form the two crura.

Related:  psych me up (the science of sex and relationships) • sexo, cuerpo y politica

Married couples are happier when they commute in the same direction What we do with our bodies can trigger metaphorical associations in our minds, having knock-on effects for perceptions and attitudes. For example, holding a warm drink can lead us to judge a person's character more favourably, presumably through activation of warmth-related personality metaphors. Washing our hands can make us feel less guilty, via activation of thoughts to do with purity. Most demonstrations of this kind have looked at immediate effects. A new study claims that physical actions that activate metaphors can also have long-lasting psychological implications.

The Science of Stress, Orgasm and Creativity: How the Brain and the Vagina Conspire in Consciousness “The more closely we analyze what we consider ‘sexy,’” philosopher Alain de Botton argued in his meditation on sex, “the more clearly we will understand that eroticism is the feeling of excitement we experience at finding another human being who shares our values and our sense of the meaning of existence.” But in his attempt to counter the reductionism that frames human sexuality as a mere physiological phenomenon driven solely by our evolutionary biology, de Botton overcompensates by reducing in the opposite direction, negating the complex interplay of brain and biology, psychology and physiology, that propels the human sexual experience. That’s precisely what Naomi Wolf, author of the 1991 cultural classic The Beauty Myth, examines in Vagina: A New Biography (public library) — a fascinating exploration of the science behind the vastly misunderstood mind-body connection between brain and genitalia, consciousness and sexuality, the poetic and the scientific. Wolf writes:

Top 10 Queer and Feminist Books of 2013 2013 has been truly awesome for new queer and/or feminist things to read. Here are some of the best ones. 10. How Poetry Saved My Life, by Amber Dawn Sex Makes Everything Less Disgusting Our biological drive to do it conflicts pretty directly with our biological drive not to get involved with other people's bodily fluids. How do we ignore the obvious grossness of sex for long enough to propagate the species? Maybe, researchers say, by turning off our disgust reflex whenever we get turned on. Earlier studies have asked this question in a variety of ways. For example, by asking men to "self-stimulate" and then quizzing them on what sex acts or partners they'd be open to. Or by showing men erotic slideshows and then having them stick their hands into cold pea soup or buckets of condoms.

The Sacred Power Of Your Yoni (Full Body Orgasm, Cervical- & Multiple Orgasm) About Me Mahasatvaa Sarita is a Tantra Master and author of two books on Tantra. She teaches Tantra for both couples and individuals in 12 countries around the world, working with a Team of highly skilled co-teachers.

Mapping Emotions On The Body: Love Makes Us Warm All Over : Shots - Health News People drew maps of body locations where they feel basic emotions (top row) and more complex ones (bottom row). Hot colors show regions that people say are stimulated during the emotion. Cool colors indicate deactivated areas. Image courtesy of Lauri Nummenmaa, Enrico Glerean, Riitta Hari, and Jari Hietanen. Female orgasm captured in series of brain scans After orgasm, activity in the hypothalamus and nucleus accumbens gradually calms down. Illustration: Corbis Scientists have used brain scan images to create the world's first movie of the female brain as it approaches, experiences and recovers from an orgasm. The animation reveals the steady buildup of activity in the brain as disparate regions flicker into life and then come together in a crescendo of activity before gently settling back down again. To make the animation, researchers monitored a woman's brain as she lay in a functional magnetic resonance imaging (fMRI) scanner and stimulated herself. The research will help scientists to understand how the brain conducts the symphony of activity that leads to sexual climax in a woman.

Molecular Fountain of Youth Discovered For thousands of years, our thirst for the legendary Fountain of Youth has been nearly as strong as our propensity for perpetuating the myth. However, over the last 20 years, the fertile headwaters of molecular biology have been pumping out anything but folklore. Not only have these waters yielded a precipitous stretch in understanding the aging process, they’re potentially guiding us closer to the source of everlasting youth. From this flow now comes word that biologists from the University of California, Berkeley have tapped an influential longevity gene that can reverse cell degeneration associated with aging. That’s right, they’re not just offering a sip from the fountain, they’re turning back the clock at the molecular level. The new study, published in Cell Reports, represents a major discovery and offers new hope for development of targeted treatments for a long list of age-related degenerative diseases, such as heart disease, Alzheimer's and arthritis, just to name a few.

Related:
Related:  psych me up (the science of sex and relationships)   -  sexo, cuerpo y politica   -  Ashwamegh Sex Capsules   -  Amy Winehouse - The Official Website   -  Harry Frankfurt's "On Bullshit"   -  Bananas and Monkeys   -  Christian the lion - YouTube   -  MyQuotes - Polyvore   -  RDOS operating system and the Neanderthal theory   -  The Power of Words - YouTube   -  Pink Floyd - Wish You Were Here - YouTube   -  10 Basic Truths About Keeping Your Relationship Healthy | Psychology Today   -  UNICEF - Convention on the Rights of the Child -   -  Skinner on Campus – Futility Closet   -  :: Authentic Happiness :: Using the new Positive Psychology   -  Is Our Childrens Learning? - Global One TV: Multimedia for Mystics   -  Daniel Wolpert: The real reason for brains | Video on TED.com   -  Ben Franklin effect - Wikipedia, the free encyclopedia   -  PROTEIGON on Vimeo   -  20 Things to Start Doing in Your Relationships   -  10 Reasons Why Having Sex Is Good For Your Health   -  BBC Sport - The psychology of choking   -  Frans de Waal: Moral behavior in animals | Video on TED.com   -  The 12 Ties that Bind Long-Term Relationships | Psychology Today   -  101 Things to Do with Your Husband (rather than watch TV) | Mom Generations - Mom Fashion and Beauty - Creating a Stylish Life for Moms   -  The 'Busy' Trap - The New York Times   -  14 Stories That Prove Animals Have Souls   -  Coping With A Narcissist | NarcissisticAbuse.com   -  Being Defensive   -  8 Great Philosophical Questions That We'll Never Solve   -  MACKLEMORE & RYAN LEWIS - SAME LOVE feat. MARY LAMBERT (OFFICIAL VIDEO) - YouTube   -  Good in Bed Blogs   -  16 Ways I Blew My Marriage   -  Power (social and political) - Wikipedia, the free encyclopedia   -  10 things you might not know about love   -  KidsMatter Early Childhood | kidsmatter.edu.au   -  30 Ways to be Intimate With Your Wife // Simple Marriage   -  9 Habits of People Who Build Extraordinary Relationships   -  Andrew McAfee: What will future jobs look like? | Video on TED.com   -  40 Days of Dating