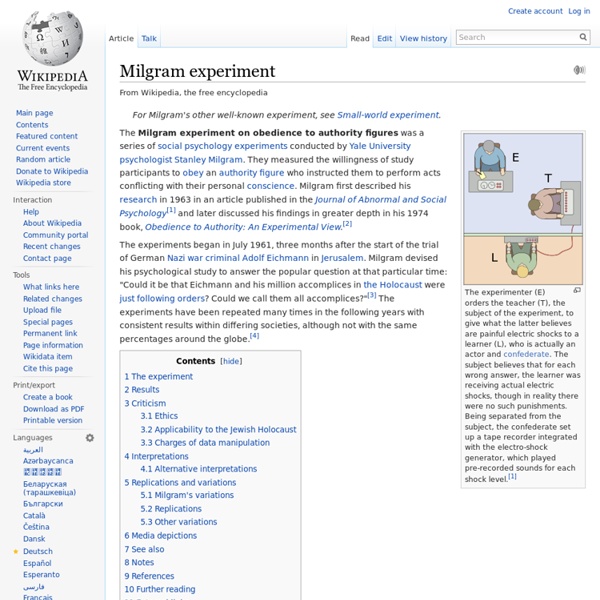 The experimenter (E) orders the teacher (T), the subject of the experiment, to give what the latter believes are painful electric shocks to a learner (L), who is actually an actor and confederate. The subject believes that for each wrong answer, the learner was receiving actual electric shocks, though in reality there were no such punishments. Being separated from the subject, the confederate set up a tape recorder integrated with the electro-shock generator, which played pre-recorded sounds for each shock level.[1] The experiments began in July 1961, three months after the start of the trial of German Nazi war criminal Adolf Eichmann in Jerusalem. The experiment[edit] Milgram Experiment advertisement Three individuals were involved: the one running the experiment, the subject of the experiment (a volunteer), and a confederate pretending to be a volunteer. The subjects believed that for each wrong answer, the learner was receiving actual shocks. Results[edit] Criticism[edit] Ethics[edit] Related:  Wiki: Philosophy & Psychology

Legends surrounding the papacy The papacy has been surrounded by numerous legends. Among the most famous are the claims that the Papal Tiara bears the number of the beast inscriptions, that a woman was once elected pope, or that the current pope will be the last Pope. The two former claims have been independently determined to be false. The latter claim has been shown to be false for every known pope barring the incumbent; but it remains theoretically possible. Vicarius Filii Dei[edit] One misconception surrounding the Papal Tiara suggests that the words Vicarius Filii Dei (Latin for "Vicar of the Son of God") exist on the side of one of the tiaras. Further, Vicarius Filii Dei is not among the titles of the Pope; the closest match is Vicarius Christi ("Vicar of Christ", also rendered in English as "Vicar of Jesus Christ"), the numerical values of which do not add up to 666, but to 214. Pope Joan[edit] The claim that a woman, often called Pope Joan, became pope first appeared in a Dominican chronicle in 1250.

Stanford prison experiment The Stanford prison experiment (SPE) was a study of the psychological effects of becoming a prisoner or prison guard. The experiment was conducted at Stanford University from August 14–20, 1971, by a team of researchers led by psychology professor Philip Zimbardo.[1] It was funded by the US Office of Naval Research[2] and was of interest to both the US Navy and Marine Corps as an investigation into the causes of conflict between military guards and prisoners. Goals and methods[edit] Zimbardo and his team aimed to test the hypothesis that the inherent personality traits of prisoners and guards are the chief cause of abusive behavior in prison. Participants were recruited and told they would participate in a two-week prison simulation. The experiment was conducted in the basement of Jordan Hall (Stanford's psychology building). The researchers held an orientation session for guards the day before the experiment, during which they instructed them not to physically harm the prisoners. [edit]

Comparing and Contrasting What this handout is about This handout will help you first to determine whether a particular assignment is asking for comparison/contrast and then to generate a list of similarities and differences, decide which similarities and differences to focus on, and organize your paper so that it will be clear and effective. It will also explain how you can (and why you should) develop a thesis that goes beyond “Thing A and Thing B are similar in many ways but different in others.” Introduction In your career as a student, you’ll encounter many different kinds of writing assignments, each with its own requirements. One of the most common is the comparison/contrast essay, in which you focus on the ways in which certain things or ideas—usually two of them—are similar to (this is the comparison) and/or different from (this is the contrast) one another. Recognizing comparison/contrast in assignments Notice that some topics ask only for comparison, others only for contrast, and others for both.

List of screw drives A screw drive is the system used to turn a screw.[1][2] At a minimum, it is a feature on the screw that allows torque to be applied to it. Usually it also involves a mating tool, such as a screwdriver, that is used to turn it. The following heads are categorized based on commonality, with the less common drives being classified as "tamper-resistant". Most heads come in a range of sizes, typically distinguished by a number, such as "Phillips #00" or "Torx T5". Common types[edit] External types[edit] External drives are characterized by a female tool and a male fastener. Square[edit] Square This screw drive uses square fastener heads. Hex[edit] A hex screw drive uses six-sided fastener heads. Pentagon[edit] A pentagon screw drive uses five-sided fastener heads. Thumbscrew[edit] A thumbscrew is a type of screw drive with either a tall head and ridged or knurled sides, or a key-like flat sided vertical head. Slotted types[edit] Slot[edit] Cross[edit] Cruciform types[edit] Phillips[edit] Frearson[edit]

Sense of agency The "sense of agency" (SA) refers to the subjective awareness that one is initiating, executing, and controlling one's own volitional actions in the world.[1] It is the pre-reflective awareness or implicit sense that it is I who is executing bodily movement(s) or thinking thoughts. In normal, non-pathological experience, the SA is tightly integrated with one's "sense of ownership" (SO), which is the pre-reflective awareness or implicit sense that one is the owner of an action, movement or thought. If someone else were to move your arm (while you remained passive) you would certainly have sensed that it were your arm that moved and thus a sense of ownership (SO) for that movement. However, you would not have felt that you were the author of the movement; you would not have a sense of agency (SA).[2] Definition[edit] Neuroscience of the sense of agency[edit] Agency and psychopathology[edit] Marc Jeannerod proposed that the process of self-recognition operates covertly and effortlessly.

The Missing Shade of Blue The Missing Shade of Blue is an example introduced by the Scottish philosopher David Hume to show that it is at least conceivable that the mind can generate an idea without first being exposed to the relevant sensory experience. It is regarded as a problem by philosophers because it appears to stand in direct contradiction to what Hume had just written. The source of the problem[edit] In both A Treatise of Human Nature and An Enquiry Concerning Human Understanding, philosopher David Hume argues that all perceptions of the mind can be classed as either 'Impressions' or 'Ideas'. "We shall always find, that every idea which we examine is copied from a similar impression. The problem of the missing shade of blue arises because just two paragraphs later Hume seems to provide just such an idea. The Missing Shade of Blue "There is, however, one contradictory phenomenon, which may prove, that it is not absolutely impossible for ideas to arise, independent of their correspondent impressions.

Nuba peoples For the musical form, see Andalusi nubah or Nuubaat. Nuba man with body painting Nuba is a collective term used here for the peoples who inhabit the Nuba Mountains of South Kordofan state, in Sudan. Although the term is used to describe them as if they composed a single group, the Nuba are multiple distinct peoples and speak different languages. Estimates of the Nuba population vary widely; the Sudanese government estimated that they numbered 1.07 million in 2003.[1] Description[edit] Dwellings[edit] The Nuba people reside in the foothills of the Nuba Mountains. A family compound consisting of a rectangular compound enclosing two round mud huts thatched with sorghum stalks facing each other called a shal. For families that were small a compound was not needed and a mud hut with a fence would be enough. Languages[edit] Main: Index: Kordofanian languages Most of the Nuba peoples speak one of the many languages in the geographic Kordofanian languages group of the Nuba Mountains. A Nuba woman.

Solipsism Solipsism ( i/ˈsɒlɨpsɪzəm/; from Latin solus, meaning "alone", and ipse, meaning "self")[1] is the philosophical idea that only one's own mind is sure to exist. As an epistemological position, solipsism holds that knowledge of anything outside one's own mind is unsure; the external world and other minds cannot be known and might not exist outside the mind. Varieties[edit] There are varying degrees of solipsism that parallel the varying degrees of serious skepticism. [edit] Epistemological solipsism[edit] Epistemological solipsism is the variety of idealism according to which only the directly accessible mental contents of the solipsistic philosopher can be known. Epistemological solipsists claim that realism requires the question: assuming that there is a universe independent of an agent's mind and knowable only through the agent's senses, how is the existence of this independent universe to be scientifically studied? Methodological solipsism[edit] Main points[edit] History[edit]